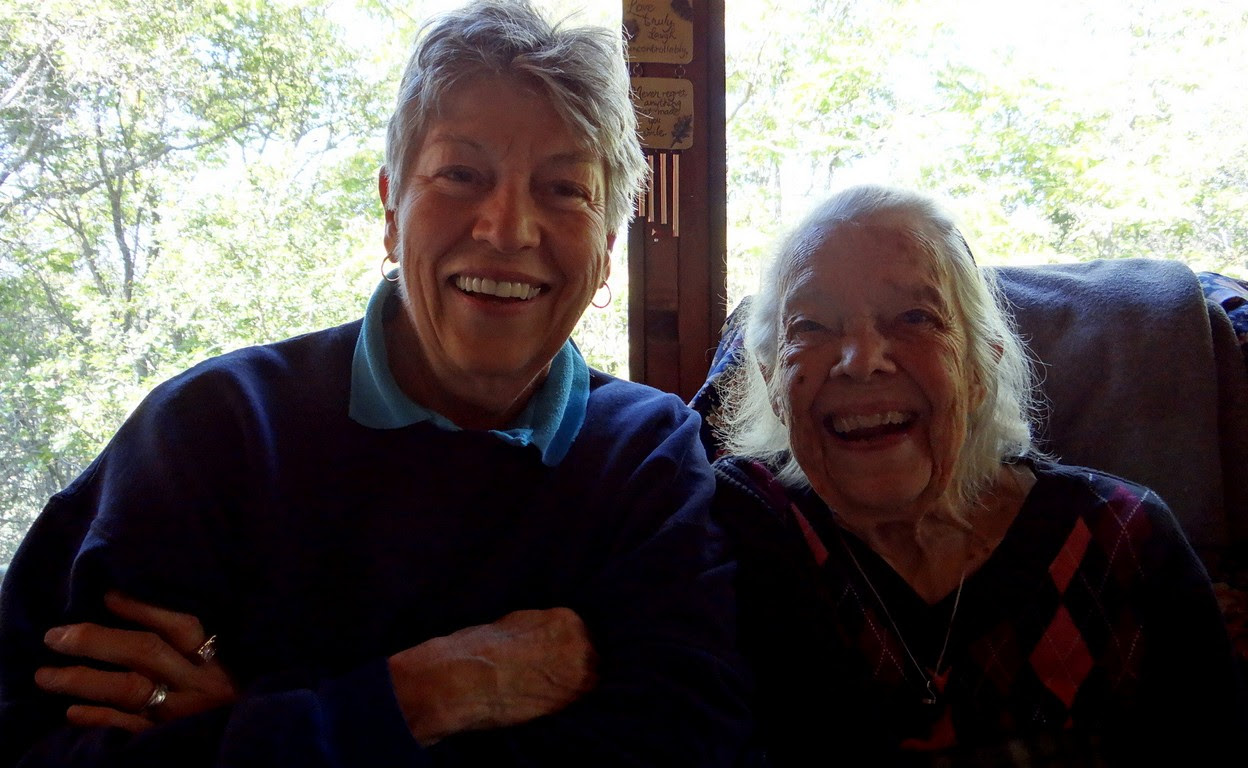 An old  friend of over 40 years is ailing. Anne Williiams'  husband, Fred,  was our square dance caller for 15 years in the 70's & 80's.  I spoke to Anne's caretaker, Tynna, and she told me all of the food was stolen from their refrigerator and freezer. Anne's house is in a remote location and they often don't lock up. Now she has a security system. 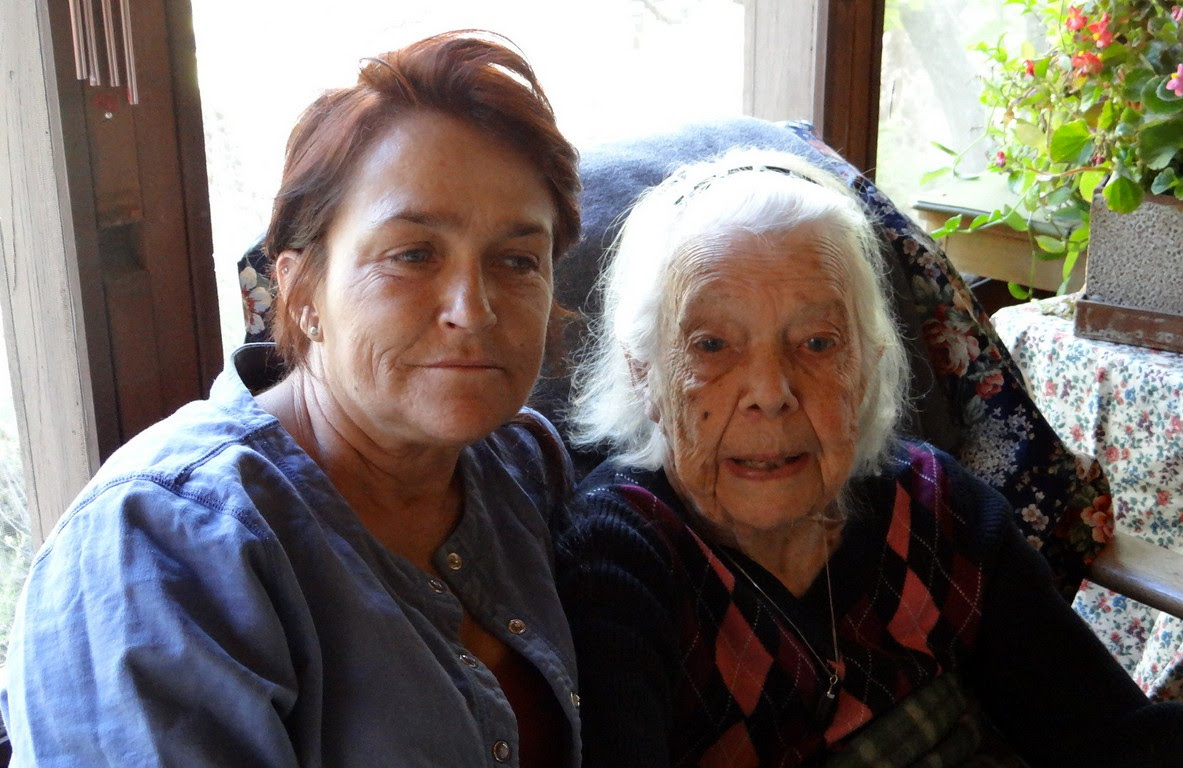 In the past, when I've gone to visit Anne,  Tynna would fix  lunch or tea and cookies. This time I brought lunch in the form of a couple  boxes of groceries.  Tynna is a former "Army Brat" and can do 80 push-ups, she told me. Anne uses a walker, but Tynna took  her to a square dance and Anne's face lit up and she danced  in her walker. Anne got so excited she called me while I was on the road. Her memory was pretty good on this visit. 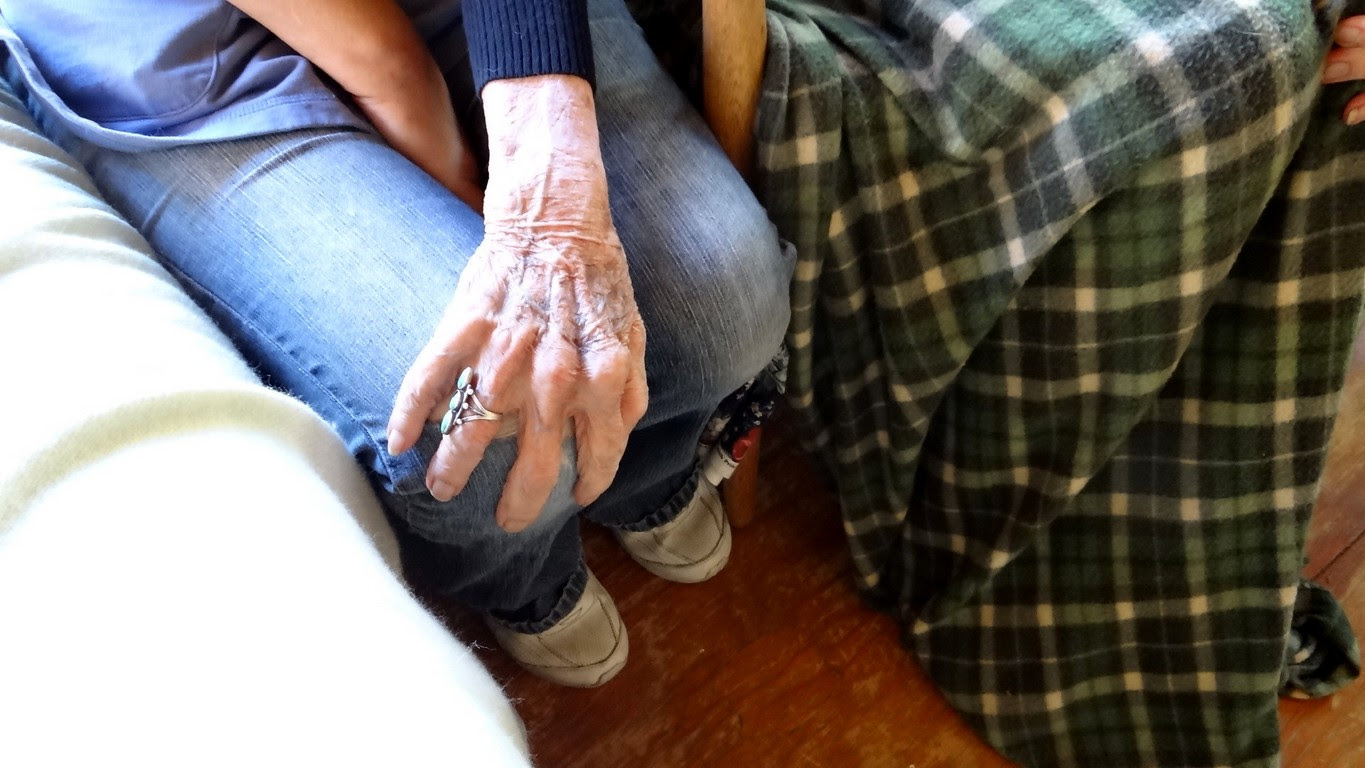 When I told her I wanted to take a picture of them, Anne very neatly reached down to cover up the hole in Tynna's pants. "My go to church pants,"  Tynna joked. 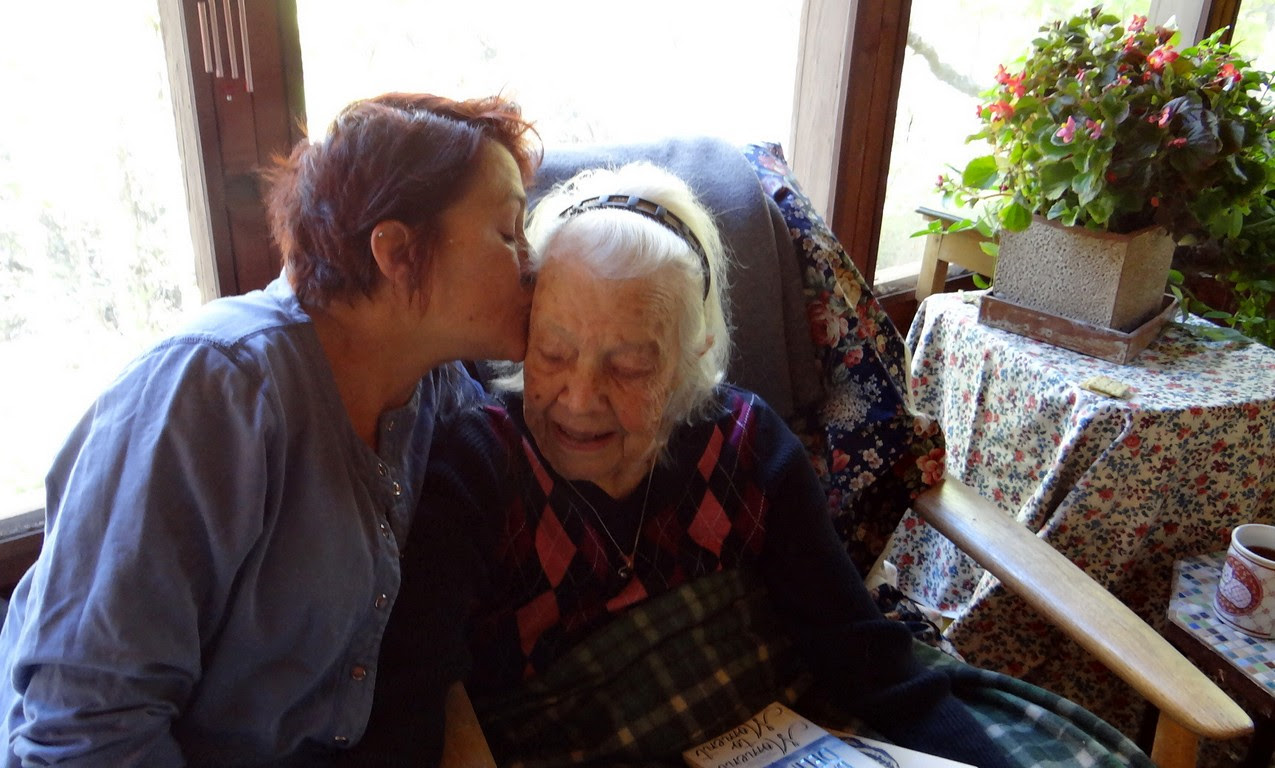 Tynna calls Anne, mom, and hauls her everywhere in a small motor home she owns. They were at Lake Alpine earlier in the year and got snowed on. Anne wants to go to the beach. That is next on the agenda. They delivered some of Anne's  paperback books, (she had a bedroom full of paperbacks) to people displaced by the Rim Fire. I asked Anne if she is in any pain. She said no, but she doesn't like being helpless. She is fortunate to have Tynna for a caretaker. A leak in the roof? Tynna fixes it. A rough spot on the floor? Tynna fixes it. More important  is the stimulation she provides an old lady who gets to see everything within reasonable range rather than the limiting four walls of her house. (I visited last week.) 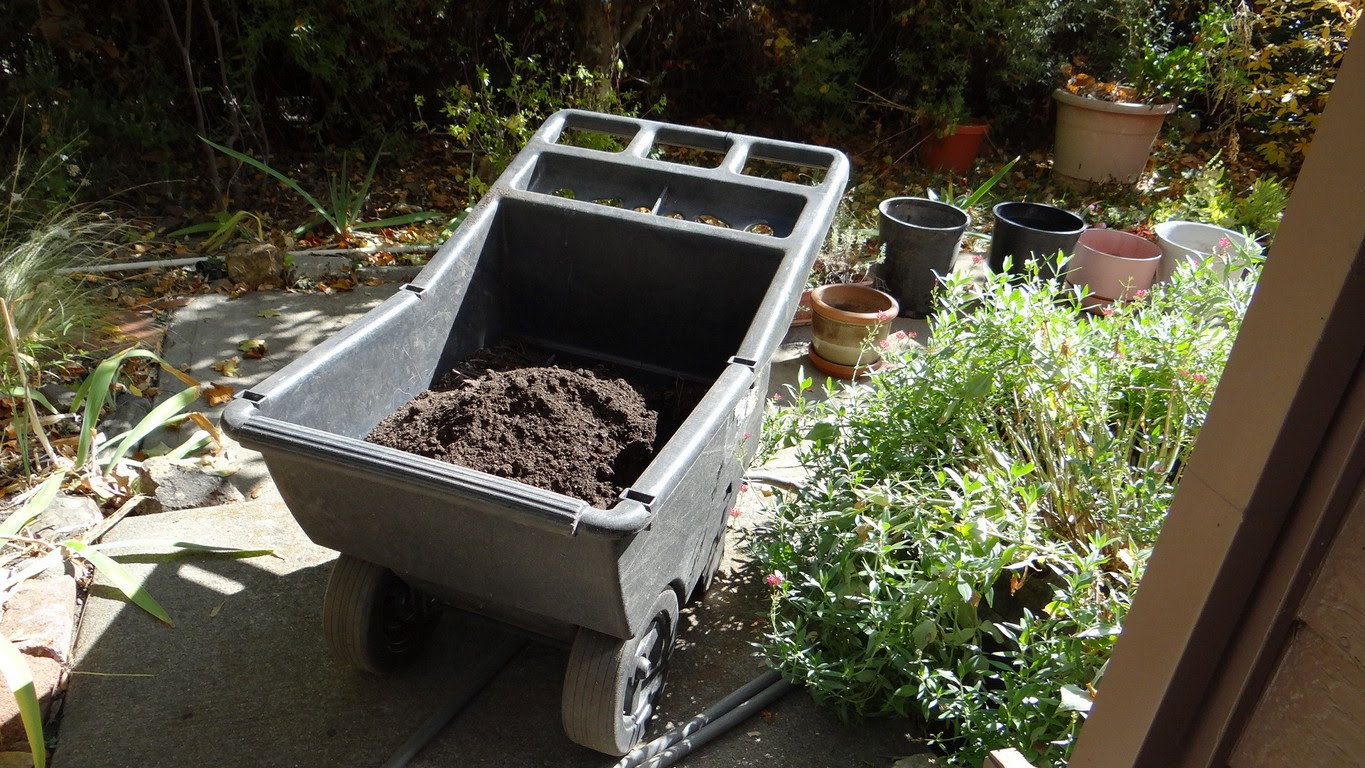 Yesterday was beautiful weather. Karen and I made up a batch of soil and re-potted some plants and put in a batch of succulents and herbs. 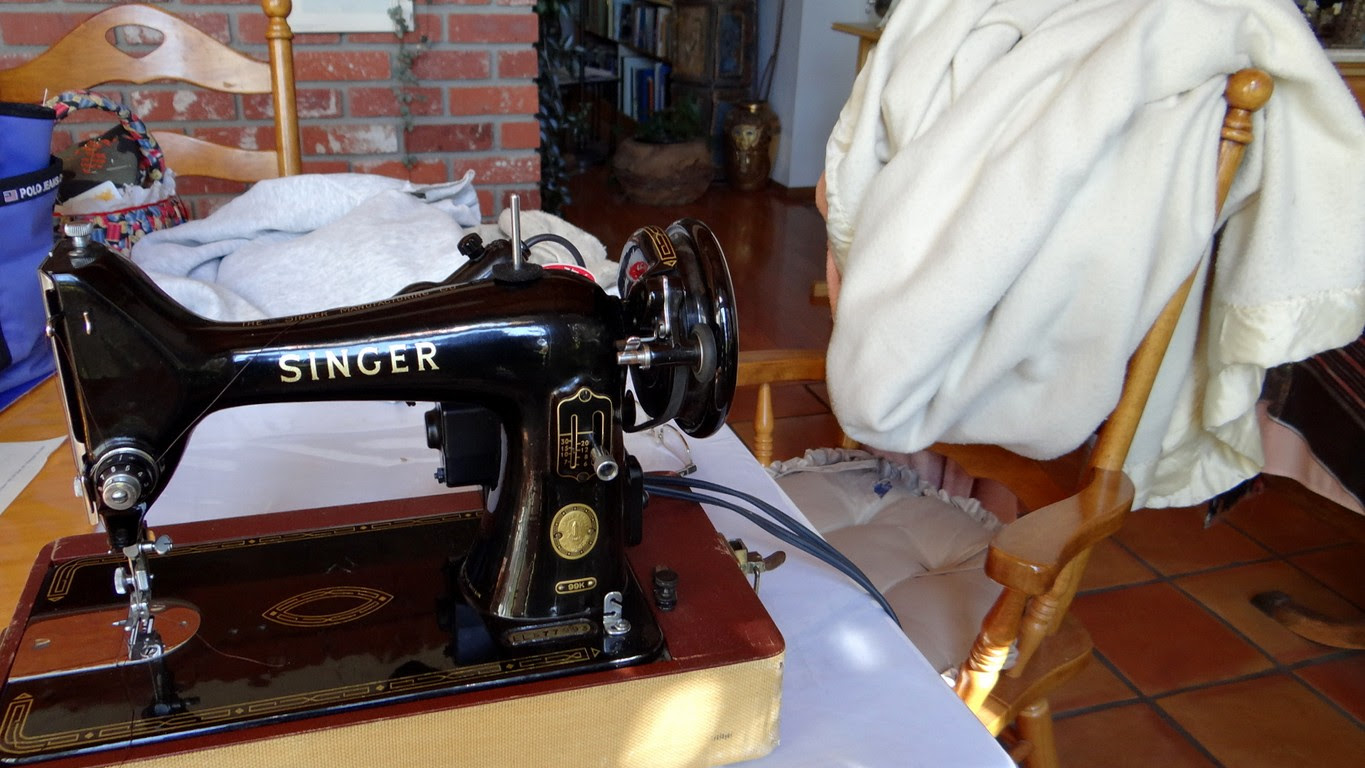 I hauled out the old sewing machine and did some mending late in the afternoon. I bought a new machine just before my husband died and now I can't figure out how to use it anymore. 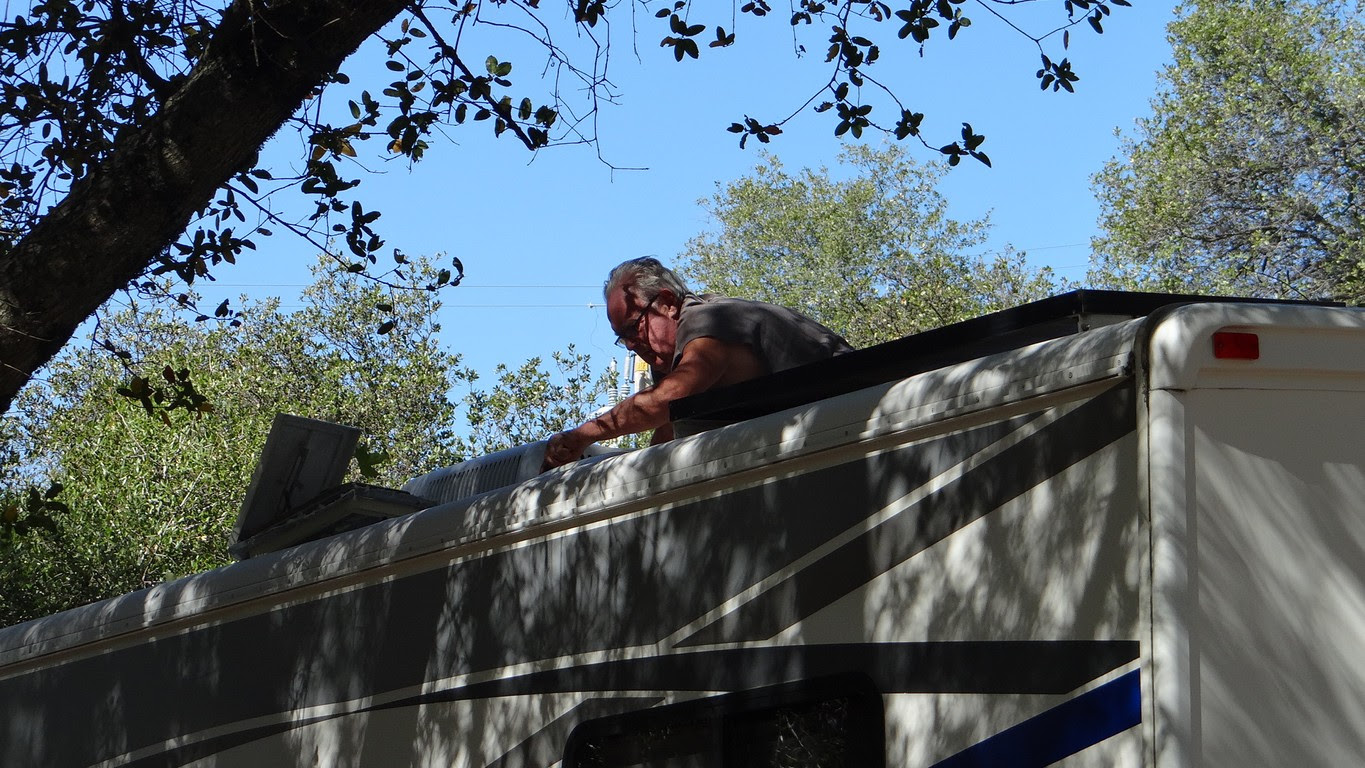 Jim spent about five hours installing a whole house fan on the motor home. We also have a glass chip that was fixed in Texas  and is now beginning to spiderweb. The Glass Doctor said he couldn't fix it. We have another guy coming on Thursday who is  equipped for a special repair.
Posted by Mary Matzek at 7:51 AM