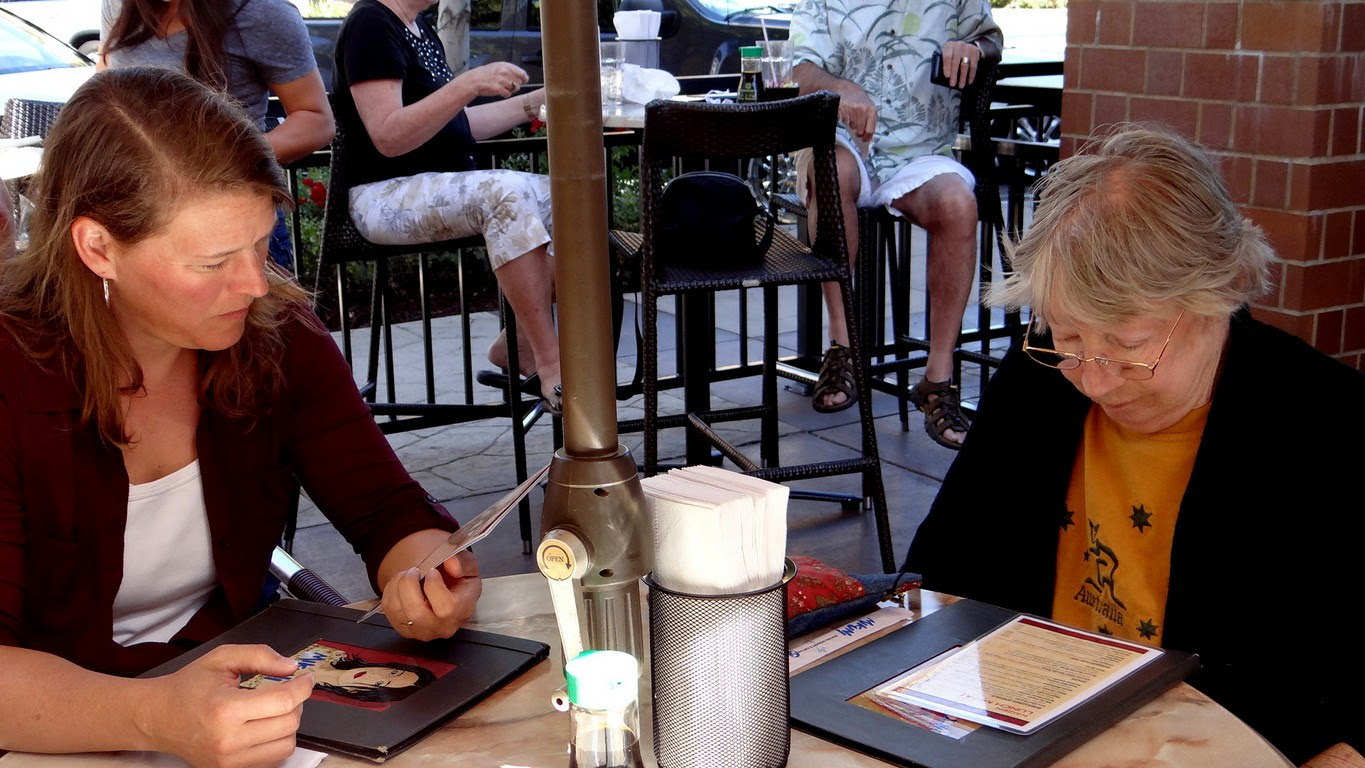 Yesterday, my daughter and I picked up my sister and took her out to lunch. She is showing pink spots on her scalp where her hair is falling out. She is feeling some loss of energy and tires more easily.  She is in her third week of radiation. Four more days to go. 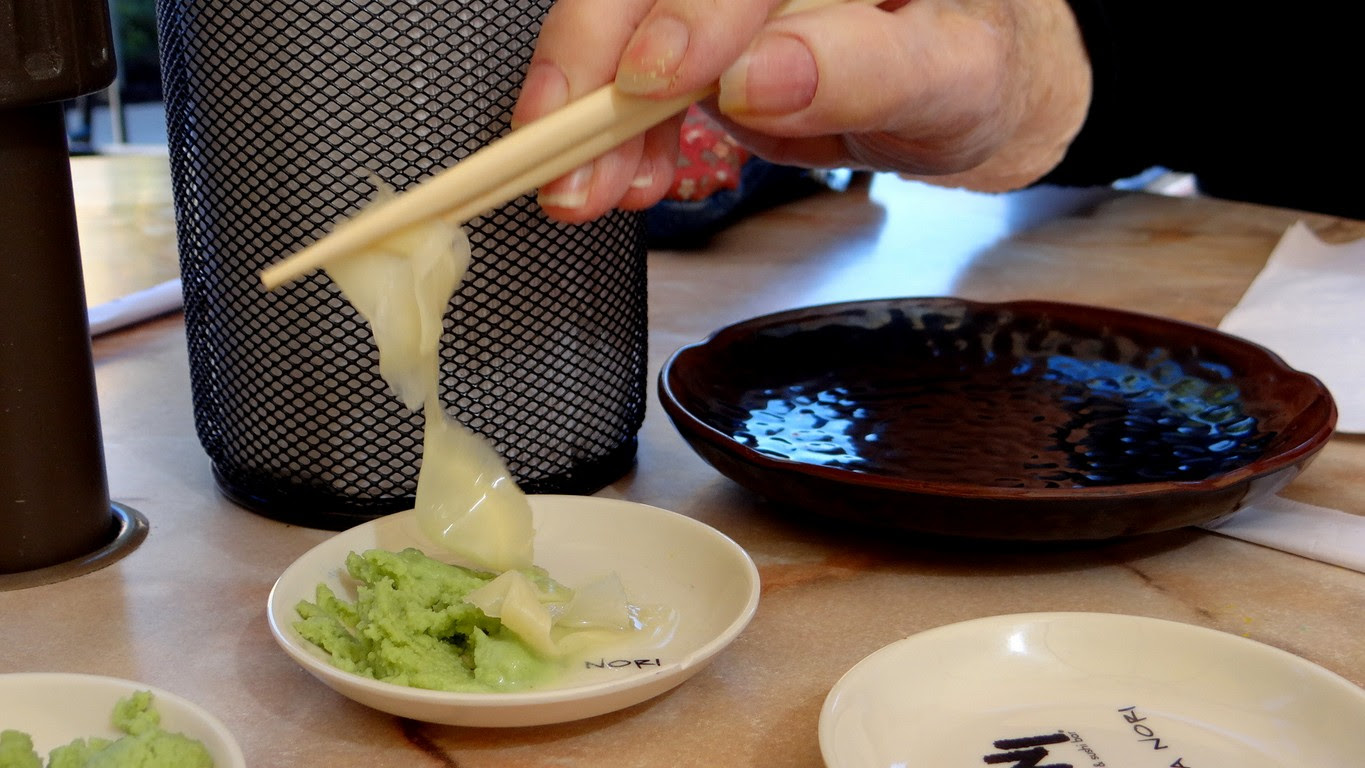 She nor I are very practiced at chopsticks, so I told her this was a test. She'd better be able to pick up the ginger or we wouldn't let her eat the rest of her meal. She passed the test. 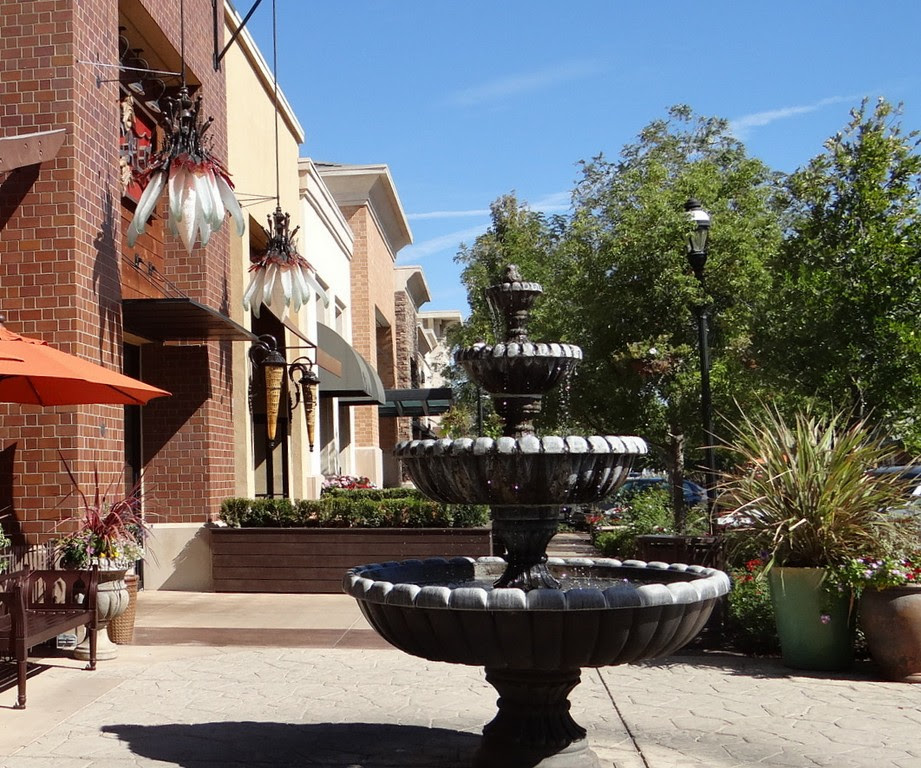 It was a beautiful day, and she managed to walk quite a bit around the mall. I was impressed and pleased. She has been through a lot and has a walker, but she strives not to use it. I told her I won't hold your arm and treat you like an old lady. She said, "But, I am an old lady."  I told her I'd walk close enough so that she could grab me if she felt unsteady. 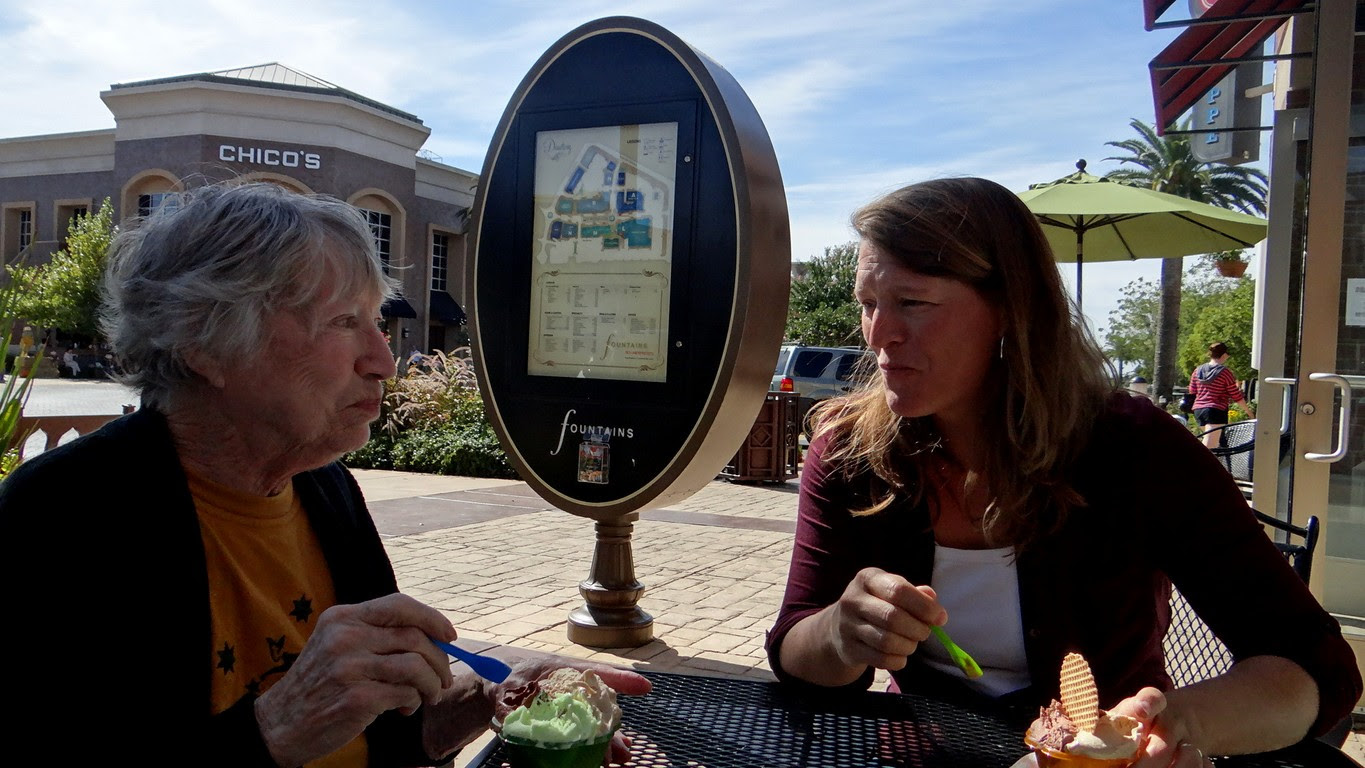 We went for gellato after our Japanese lunch, and got into story telling on our parents who aren't here to defend themselves. "Remember at Uncle George's wedding, when dad got soused and blitz danced everyone around the house?" I brought her a manuscript I had typed up after my visit to the Upper Peninsula and collaborated with Dawn and my oldest brother about the many places we had lived. Too many. Dawn attended 13 different schools while growing up. 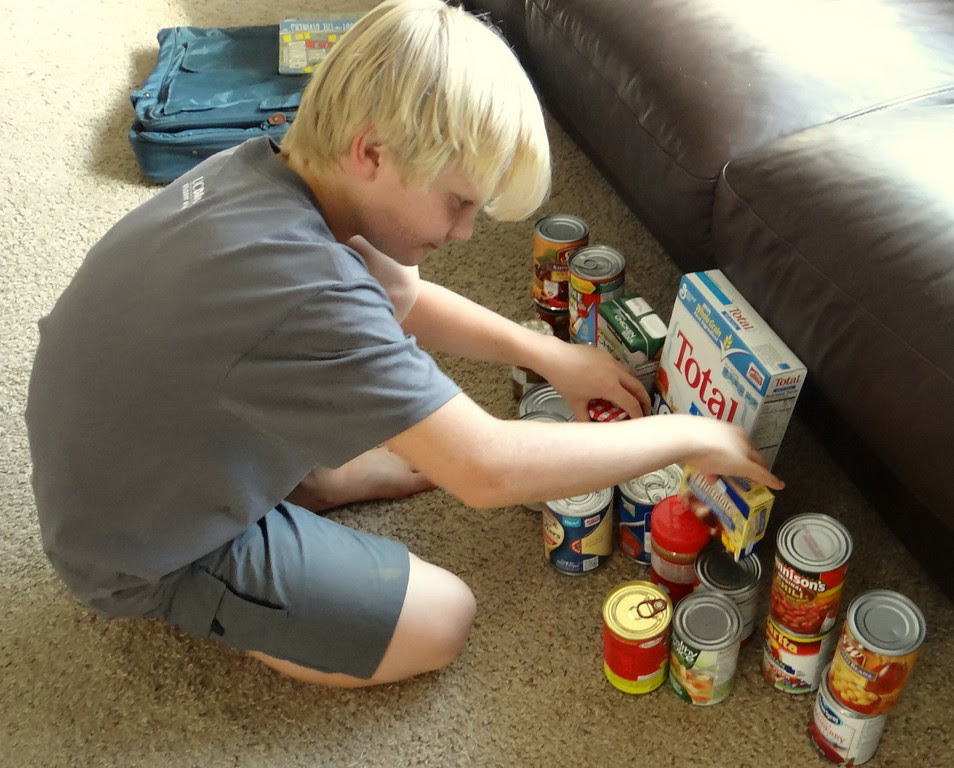 When we returned to my daughter's house, Theo was arranging his food bank stuff. The boys are doing a community service project which is required of them for their upcoming test to reach Black Belt in Karate. Theo prepared a brochure, and canvassed one section of his street for donations. He practiced his spiel on his mom who would come to the door like an angry witch or a grumpy old man, until they giggled too much to continue. Now when he asks for a donation he has to concentrate on being serious. I guess it worked. He still has more territory to cover. 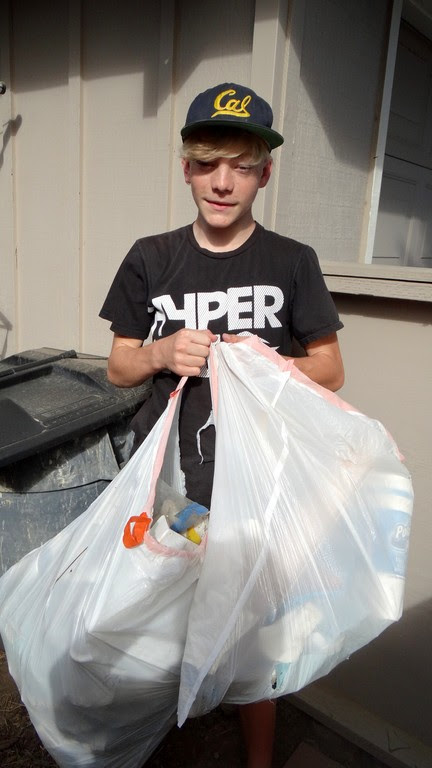 Owen chose to pick up garbage along a section of creek where the city hosts a day camp. His first sweep netted two full garbage bags of junk. He has the opposite bank to clean before he is done with his project. 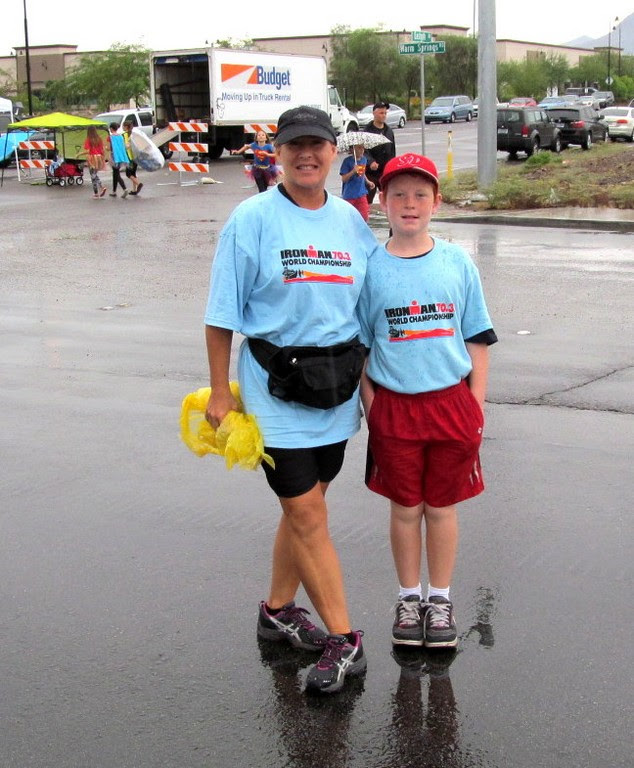 The spirit of volunteering,  community service and physical fitness is an important thing to teach children, my oldest daughter believes. She and Austin volunteered at the Iron World Championships in Las Vegas. He worked the bike booth and handed out water, Gatorade, gelatin cups, and so on. The Triathlon is a swimming event, a run and a bicycle ride. 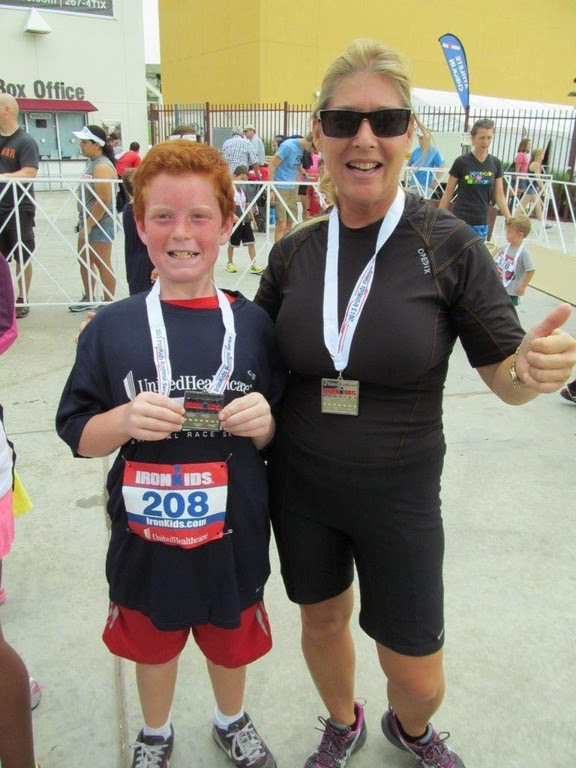 Then Austin participated in the IronKids event, which is a 4K run. Pretty nifty.
Posted by Mary Matzek at 8:22 AM