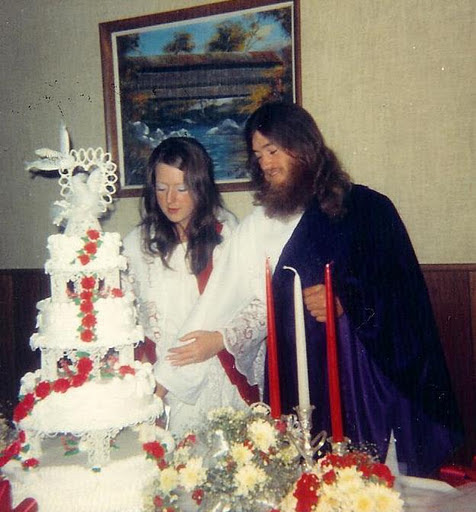 I finally learned the rest of the story of how Norman returned to his house when he got kicked out of the Sacramento Greyhound Bus station. You've seen how scruffy he looks with his wild white hair. When he was first homeless, he worked as a department store Santa. His only record at that time was drunk driving. They even gave him a ticket for drunk driving on a bike.

Family  members always tried to convince him it would be much easier if he would  cut his  hair and beard. His answer was always, "Jesus was a carpenter and Jesus had long hair and a beard." The picture above is his wedding photo from 1972. His ex-wife and he remain friendly.  Mostly, she prints out stuff on her computer for him  and mails it to him. He is an inveterate letter writer, always about politics.

I stated in my blog yesterday:
He sizzles about the  injustice of this,  (in his mind) probably sipping on a pint, and when he gets to Sacramento he tells them, I don’t have the money. He argues he paid round trip he is entitled to a round trip. Finally, after a shouting match, he walks somewhere nearby, he buys more drink. Just before the bus is set to leave, he changes his mind and goes back to the station master and prepares to pay for the ticket but he warns them they will hear from his attorney, etc. etc.

I've seen him drunk so many times, I figured he was probably sipping on a pint. There was no place within walking distance to buy booze. So, not true. When he presented his ticket, he knew it was up to the driver to let him on or not. She chose not, but also confiscated his ticket and receipt and refused to give it back to him.  Then the shouting match. He stormed out and went back in later to buy the ticket he originally told them he didn't have the money for. He reached in his pack, and two security people immediately grabbed him. He carries a pack with a strap like a purse. Of course he didn't have a weapon, which didn't matter to the security people. They kicked him out of the station and warned him not to come back or they would call the police. 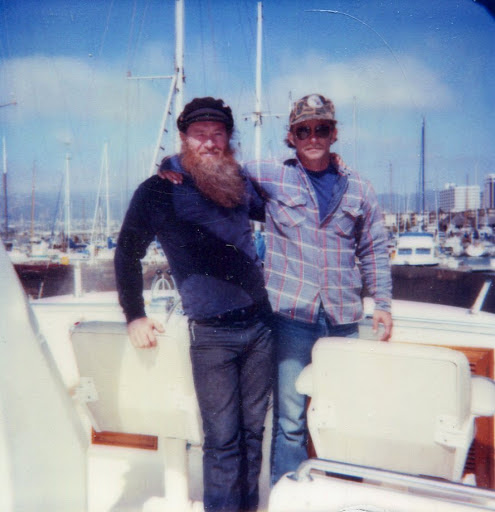 This is Norman when he worked a fishing boat in Alaska for a couple of years.

He bought a ticket on a local bus that pulled into the station. It took him to Sacramento City Center. He spent the night in a city park. He said it was too cold to sleep, he basically just shivered all night trying to keep warm. In the morning a woman in an electric wheel chair  found him and asked what happened? It turned out  she was stranded in Sacramento as well. She called Crystal Jordan, a social services person who is helping her. Crystal called Greyhound and reported what they had done to Norman. Then she bought him a bus ticket on a different line to San Francisco, and a Bart ticket to San Leandro. He walked home from there. He promised to pay her back for the tickets. Knowing Norman, he will do it. 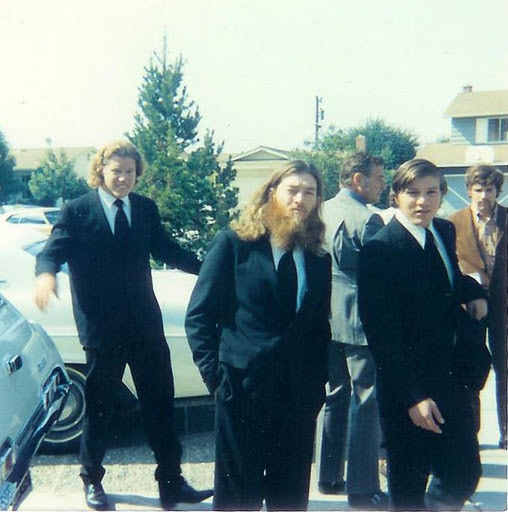 Pall bearers at my Dad's funeral. From left, my nephew Tom, Norman, my husband in back, younger brother Clark, cousin Bob far right.

Norman apologized for making me worry. I learned from my house mate Karen, who was a bus driver for 17 years, that homeless people will buy a ticket on a bus to keep warm and just keep taking the bus as long as they can. That is most likely why the ticketing agent wouldn't honor his ticket or give it back to him.

The security guards searched his pack. Because he doesn't drive, he has no printed I.D. Thus, to them, he is homeless even though he told them his address. He had no weapon, but I can understand why they might think so when they see a scruffy guy like him, reaching in his pack.

He lives in  a house, which has a shower. He bought  a washer, dryer, television set, refrigerator, bed and land line phone.  He has never been on welfare, nor used food stamps. Technically, right now, he is not homeless. Obviously, being scruffy with a drinking problem can negatively decide your fate. I've stated he has mental problems,  but it wasn't always so. That happened after a serious accident.
At this point, I doubt cutting his hair and improving his  appearance would do much good.

I meant to blog this morning on Privatization of Prisons. They were supposed to save money, but it is more costly to keep a person in a private prison than a State, Federal or County operated  facility. When I worked in the jail, business people hated it that prisoners worked and helped with their own expenses. They fought and won. Thus, prisoners were only allowed to make license plates for the state in California.  Now, privatized prisons pay workers 22 cents an hour for labor. They can make chicken nuggets for schools and all kinds of products that take away jobs from the private sector.  Furthermore, they fight to keep people in jail, support programs that incarcerate their "labor force" longer. They were bankrolling the Three Strikes law in California, and New York, and other laws that keep people in prison longer through ALEC . Private prisons now control the parole system. They have few checks and balances for how they run things and how much food is fed to each prisoner. There have been some recorded abuses. They cannot compare recidivism rates because the private warden can cherry pick his releases for statistics. Private Prisons are a bad deal for all of us.
Posted by Mary Matzek at 8:34 AM