I actually got through my mail yesterday and have two small grocery bags full of paper to recycle. Opening the mail isn't the end of it. There is always a number of things from the mail to attend to.
In the late afternoon, I managed to pick the plums left on one tree. The green gage plum tree awaits me today. The little satsumas were not as tasty as usual, maybe because of unseasonal rains. Probably a benefit of climate change to have such a bumper crop of apples, peaches, plums and pears. 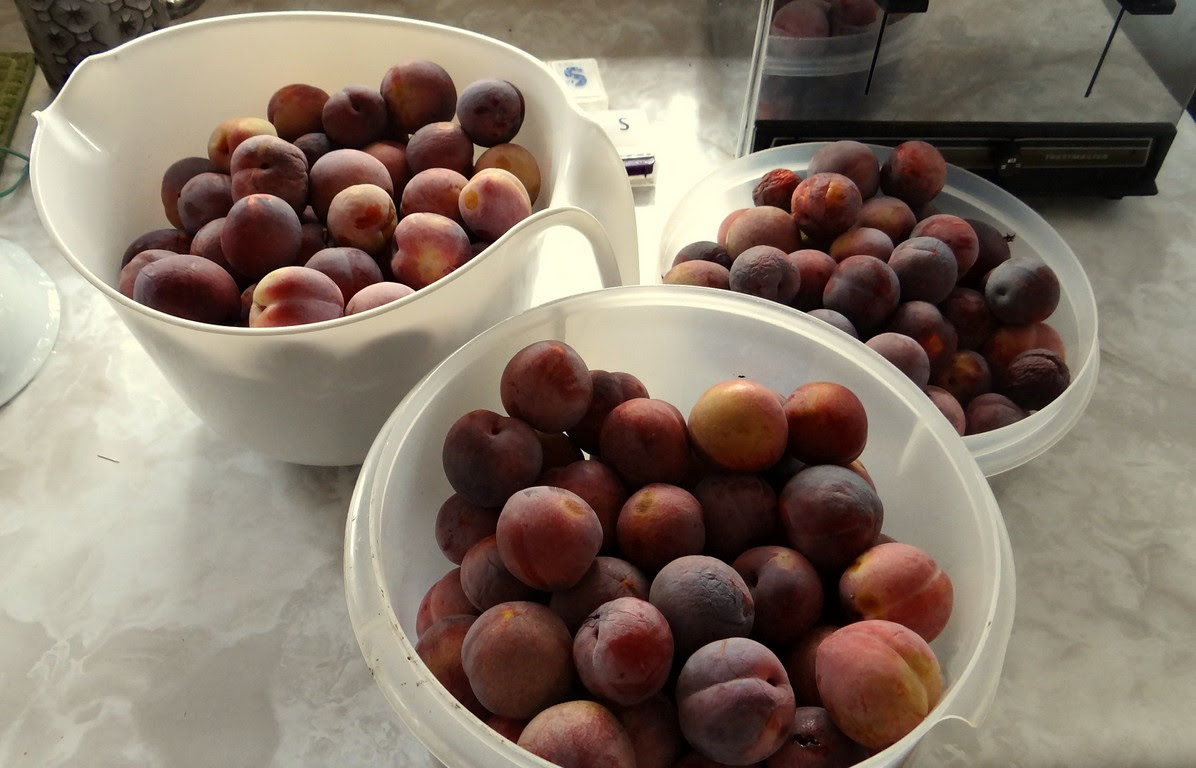 Karen, my house mate,  gave bags and boxes of plums to neighbors, made jam, brought some down to the senior center, and still the tree had plums, high in the top. I picked these three containers full and shook the rest down for the deer. 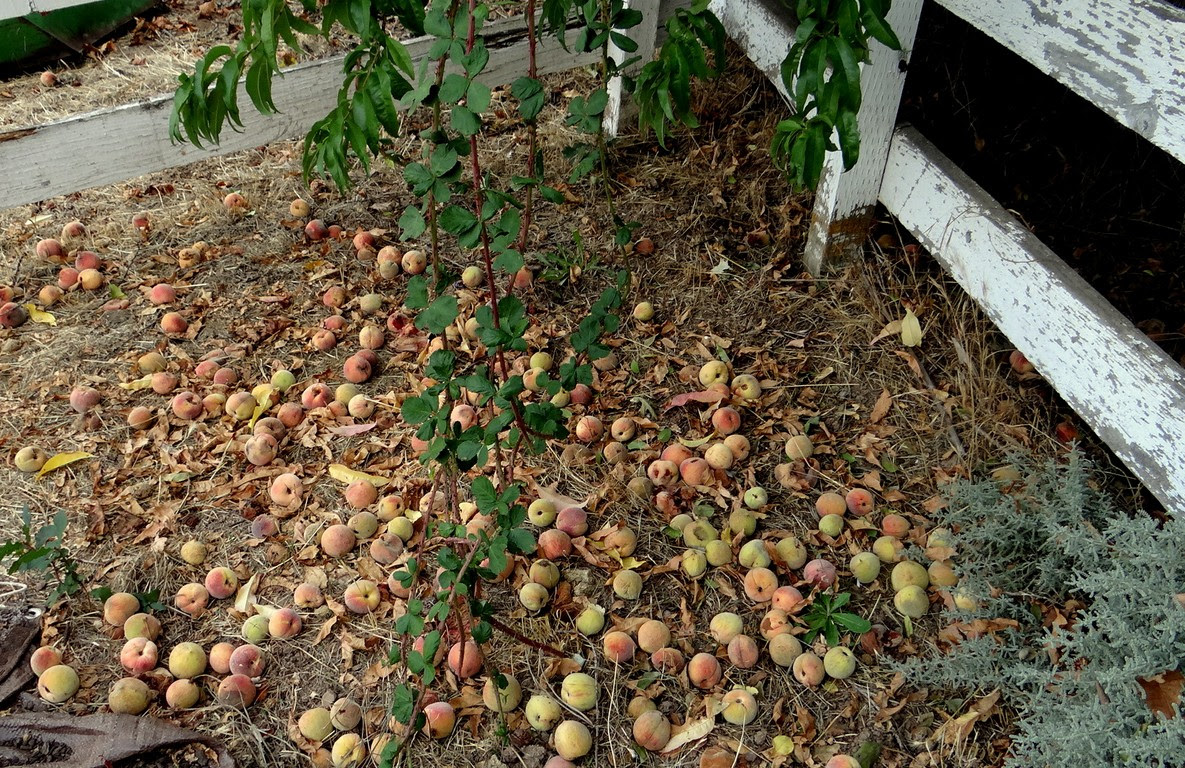 Everyone enjoyed the big Elberta peaches, and Bartlett pears, but the wild Indian peaches were prolific. Karen couldn't find takers for them,  though she made jam and gave to anybody who would have them.  (You have to peel Indian peaches.) 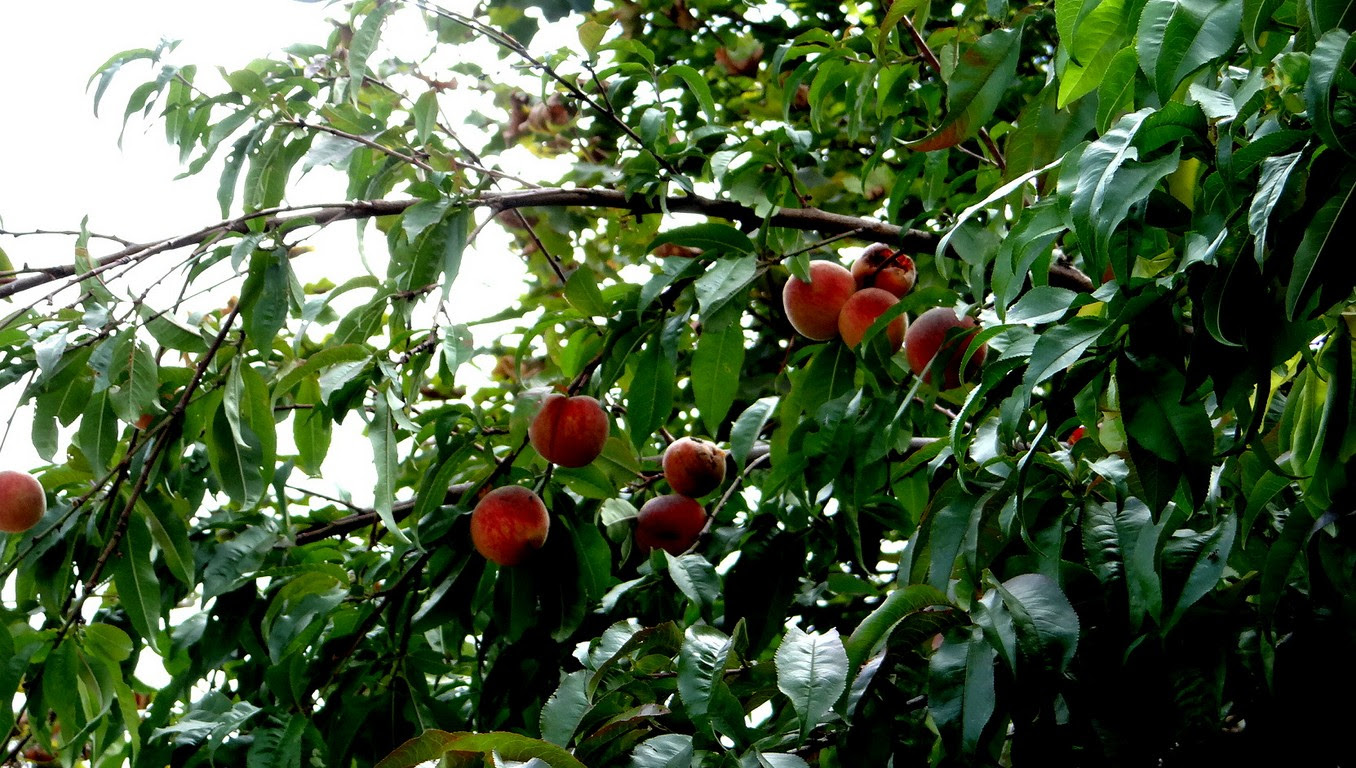 There are still some peaches left high in the tree. You can see the huge bird peck in one of them. I might be able to pick what's left here and on the other side of the tree. 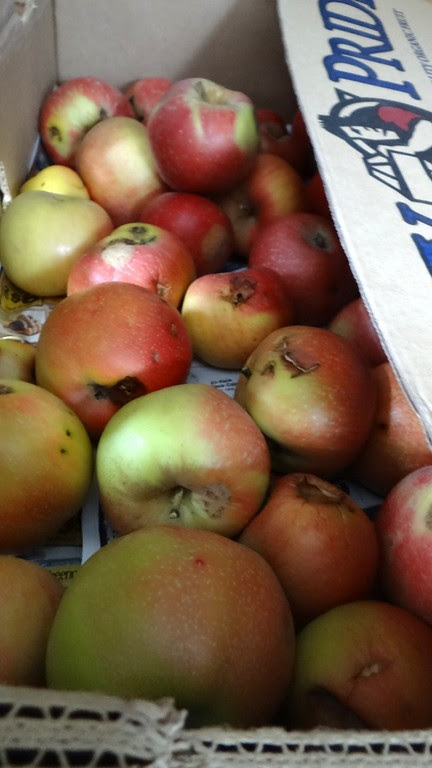 One box of apples remained of those I picked before I left. They are looking spotty but they have kept their firmness stored in newspaper on the cold garage floor.  There are still a few apples on two of my trees.  My job today is to make apple-plum sauce. Maybe a plum-peach sauce batch. Sauce preserves easily and freezes well, too. I have limited time so a bit each day should get it done. All my fruit is organic.
Now that I'm home, I get the news and it is never good news. The longer I am with Jim, the more I understand his philosophy of  "I don't read the news. It is all bad and I can't do anything about it anyway."
I guess it isn't in my personality to not have hope, or not to recycle, or not to look to the sun for energy, etc. and I always will do my part to reduce human impact. In fact, I'm writing a book about it.
I took this condensed report directly from Mother Jones Magazine. The report was just published by the United Nations Intergovernmental Panel on Climate Change's "Summary for Policymakers" of its Fifth Assessment Report—
Looks like we are in deep doo doo for the next 1,000 years. Humans denied involvement or didn't know what we were doing to the planet for about 100 years.
Mother Jones calls this the "Cliffs Notes version", providing the highlights of the text in a  more readable fashion. They admit the report is SCARY:
1. Global warming is just plain unmistakable. At the top of the report, the warming of the climate system that we are seeing (in the form of melting ice, temperature rise, and sea level rise, among other factors) is called "unequivocal" and "unprecedented over decades to millennia." Not mincing words here, then.
2. Scientists are more sure than ever that humans are driving global warming. The certainty about this central conclusion has now been upped to 95 percent. Let's allow the scientists to say it in their own words: "It is extremely likely that human influence has been the dominant cause of the observed warming since the mid-20th century."
3. Atmospheric carbon dioxide is higher than it has been in nearly a million years. How much have humans changed the planet? Well, the IPCC says our atmosphere has more carbon dioxide, more methane, and more nitrous oxide than it has had in "at least the last 800,000" years. And how long did it take us to do that? A 40 percent increase in carbon dioxide has occurred since pre-industrial times—or, roughly in the last 200 years.

Item four is hard to understand, but don't miss reading #6.

4. A clarification on the alleged "slowdown." The IPCC has added considerable clarification to the most controversial part of the report, where it notes that the rate of surface temperature increase over the last 15 years ago is somewhat less than it had been previously. After an earlier draft of the report leaked in August, this section was widely cited by climate skeptics to cast doubt on global warming. Now, the IPCC clarifies that short-term trends of this kind "are very sensitive to the beginning and end dates and do not in general reflect long-term climate trends." The report says the recent reduction in the rate of warming is caused, in roughly equal parts, by natural climate variability (possibly including heat going deeper into the oceans) and a temporary decline of solar radiation reaching the planet, thanks to volcanic eruptions and the solar cycle itself. (For more detail, see our live blog.)

5. Projections of sea level rise have increased. Last time around, in 2007, the IPCC was faulted for having projections of future sea level rise that were arguably too conservative, because of the way they dealt with possible contributions from the melting of land-based ice (e.g., Greenland, West Antarctica). This time, the projections are higher for the end of this century. The highest end projection indicates oceans could rise by more than 3 feet (or 0.98 meters).

6. Much of global warming is irreversible and will continue for centuries. In the most somber part of the report, the IPCC provides a truly geological perspective on the changes that we are causing. It notes that much of what we are doing to the planet is "irreversible on a multi-century to millennial time scale" and that temperatures will remain "at elevated levels for many centuries," even if we completely stop emitting carbon dioxide. Indeed, the report states, much of the carbon dioxide that we've emitted "will remain in the atmosphere longer than 1,000 years."

I read where we've had the biggest chinook salmon run in 20 years and no one knows why?  Did it ever occur to anyone that salmon predators are in trouble?  Or that beef raising countries fished 40 billion pounds of anchovies out of the ocean to use for fertilizer. Shouldn't there be an ocean ecological guard that says you don't rob the oceans for beef? Capitalism gone amok! Greed the driving force.