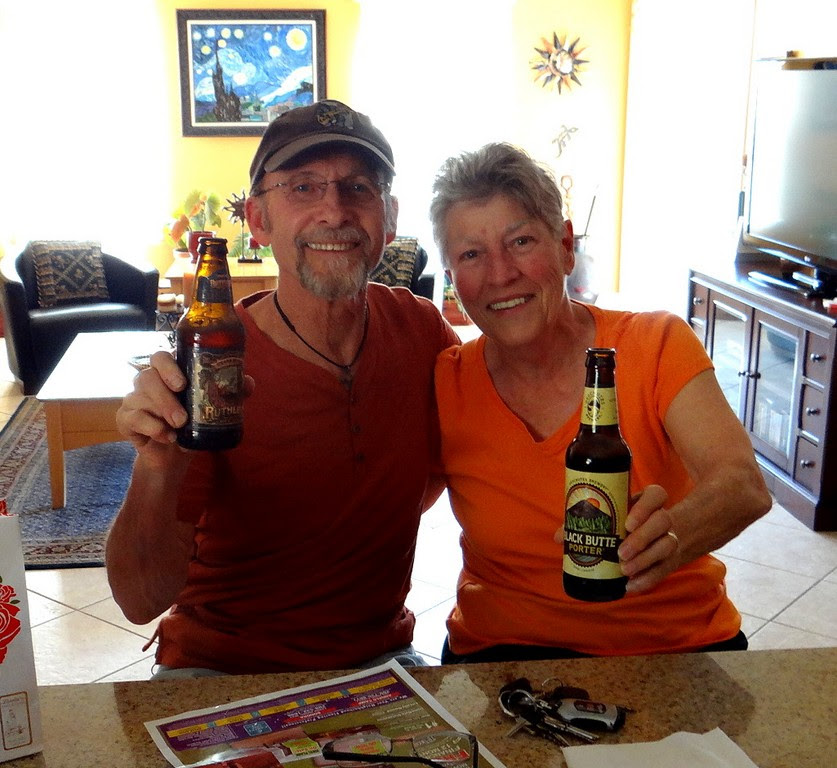 Growing up in a big family, we didn't celebrate birthdays, other than to have a home-made cake and possibly your favorite meal for that day. In our family we have two March birthdays, my son Doug and my grandson Mason. Mason's uncle Mike, I discovered, drinks craft beers and offered me my very fav, Black Butte Porter. Now, that makes it a celebration in itself, selfish person that I am. 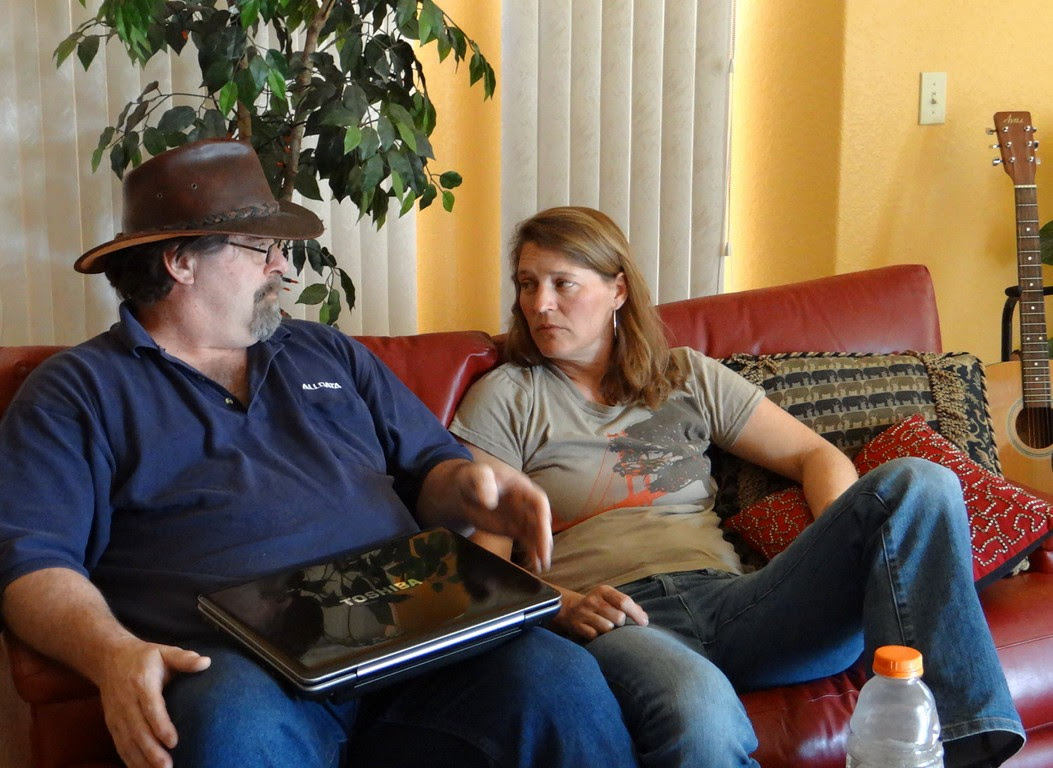 Doug turned 50 and he has recently joined the 21st century and now has an email address. He and younger sister, Virginia, appeared to be in deep, serious, conversation with that computer. 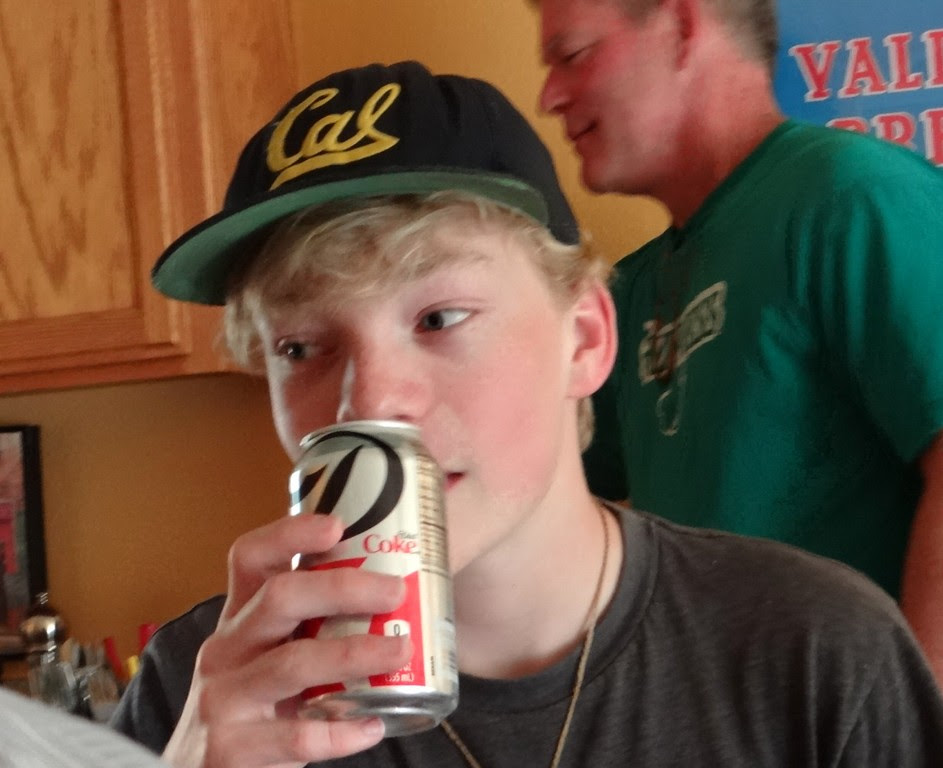 I had an opportunity to talk to my 14-year-old grandson, Owen, about our upcoming trip to Turkey, explaining how the trip works, what to pack, etc. 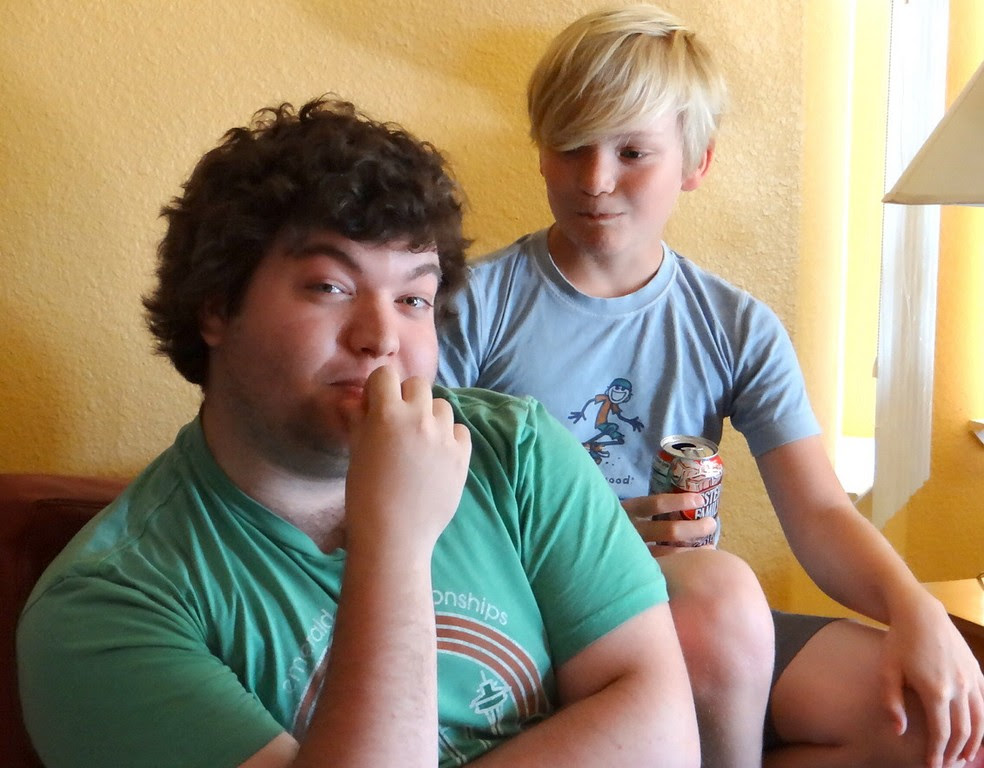 Mason, the other birthday boy, age 19, told Owen, (and Theo, looking on, since he is the next 14-year-old to get a trip with grandma), that the way they stop the buses on these tours is to let it run down a hill and hit a bunch of cars to stop it. Of course, we had a good laugh about that, because that is what happened when we were in Thailand. Mason was one of three people still left on the bus when it went careening down a hill and the driver had to run into a bunch of parked cars to stop it. It tipped over on it's side and no one was seriously hurt. 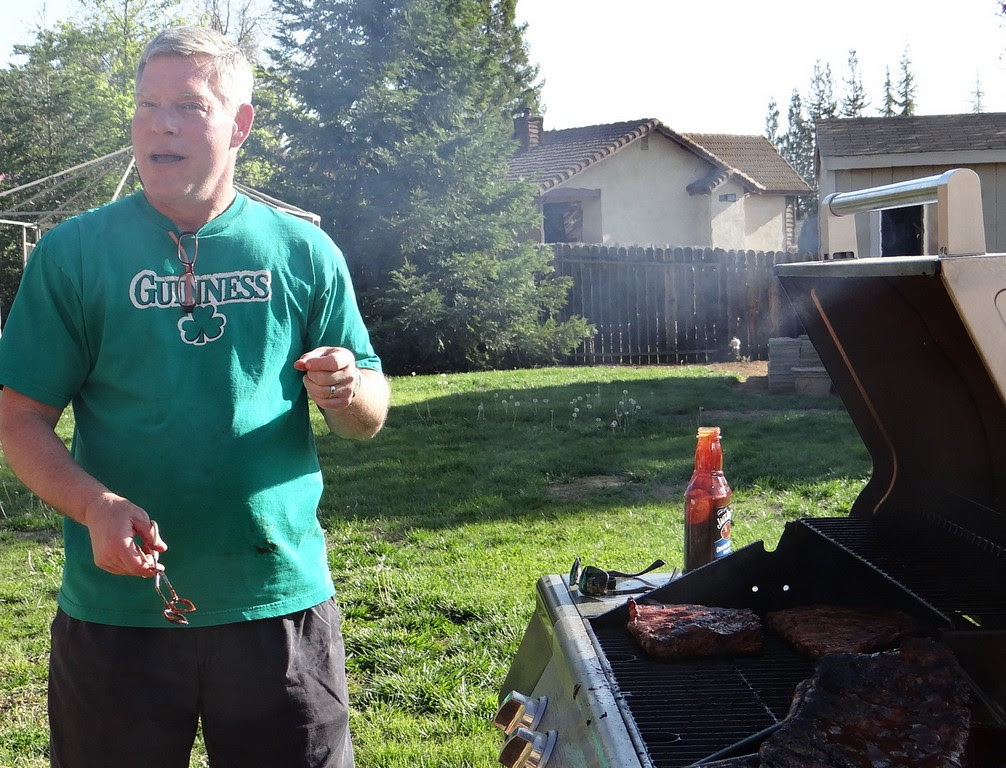 Ken faces his barbeque so he can get smoke in his eyes. He barbequed a bunch of ribs and chicken. The rest of us brought food to go along with the meat, and hey, any reason to have a party and good food. Why not? 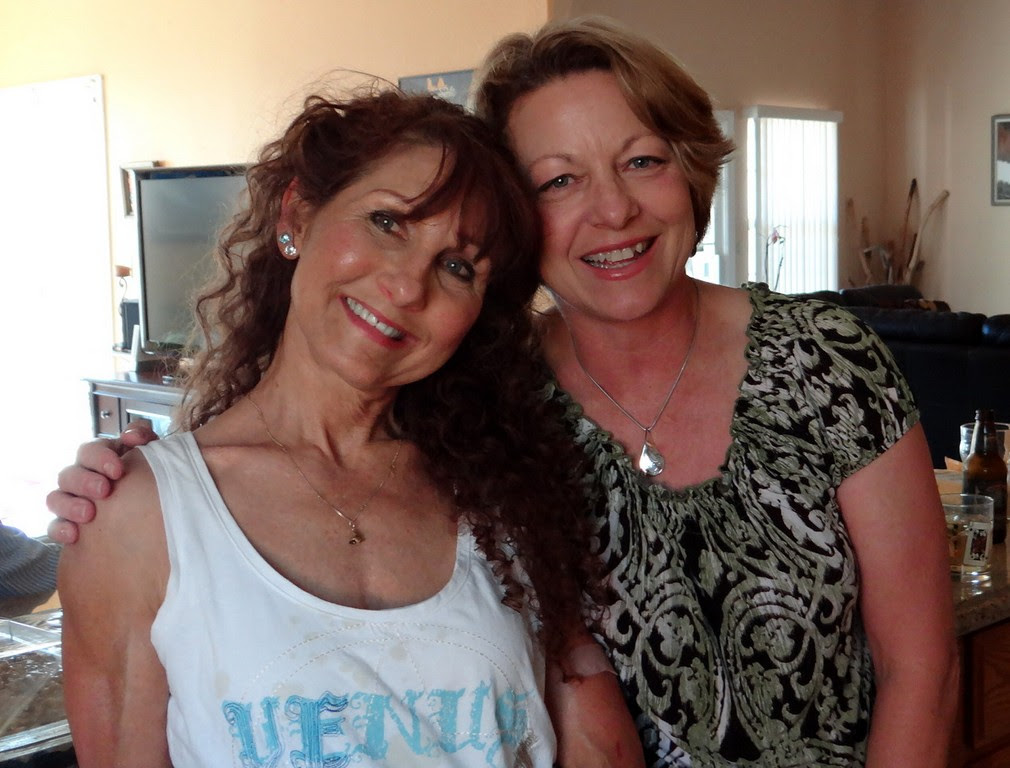 My daughter-in-law Laurie is so grateful that she and Ken were able to move out of Vegas and back to California. Her brother Mike and sister-in-law Ramona Henniger, live in Lodi where Laurie was born and grew up. 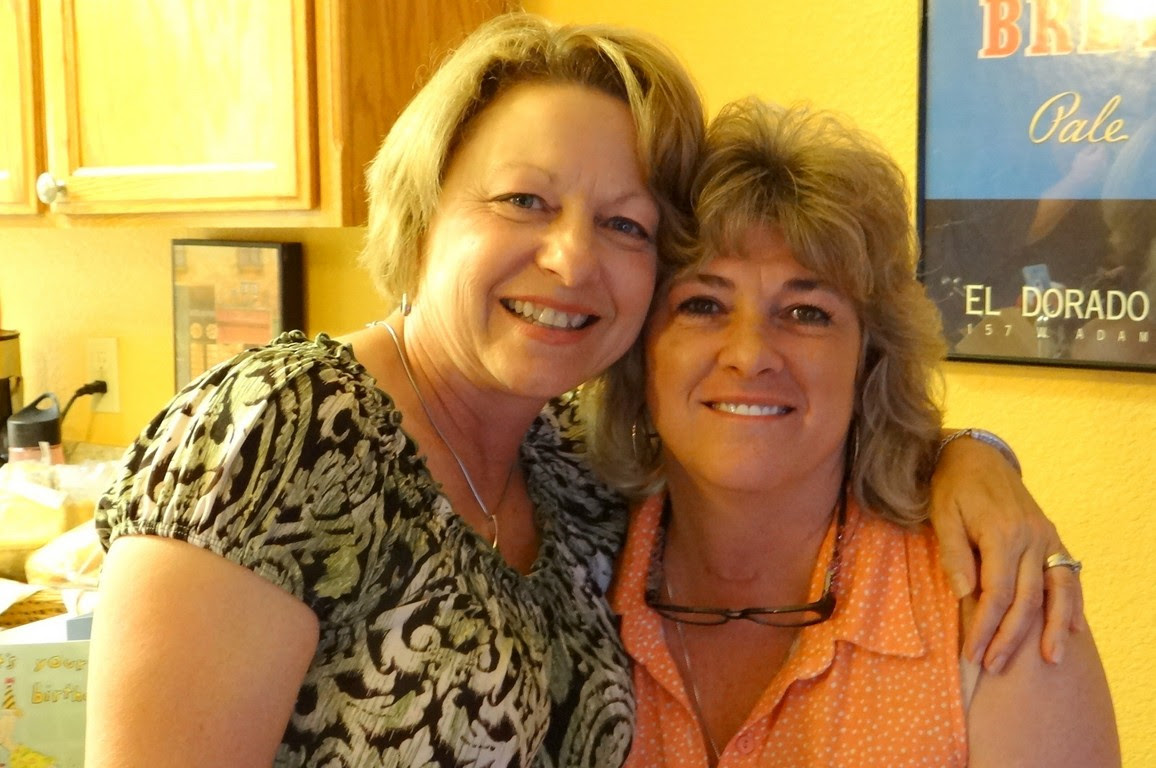 One of her best high school friends, Diane, came to help celebrate. It is nice to get back to your roots and she is a happy camper. 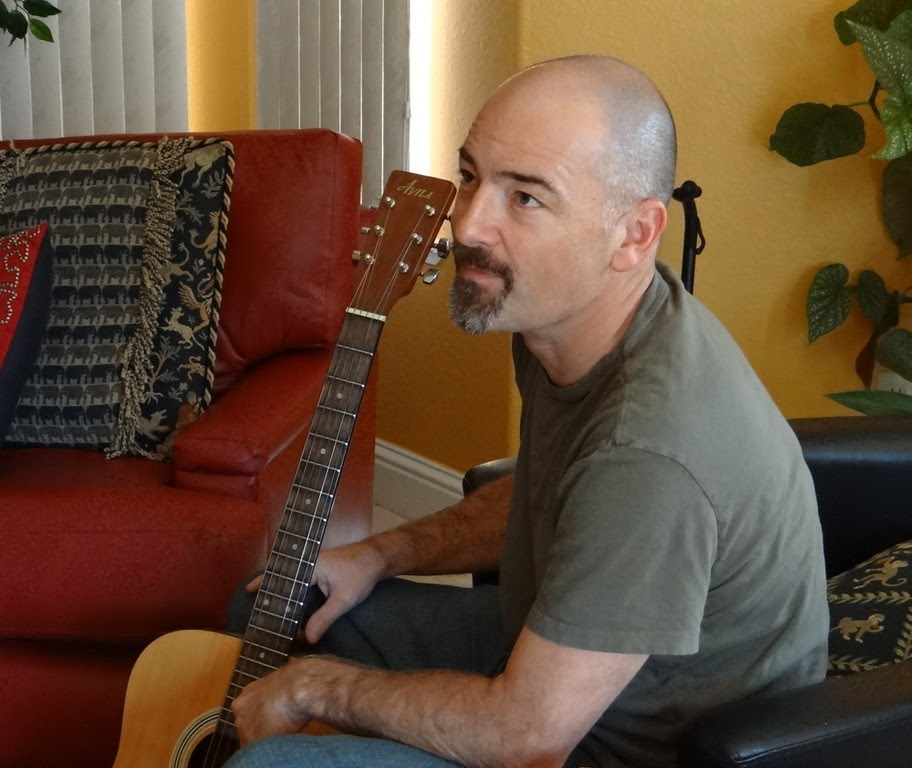 Cedric likes to plink on his guitar. Both Mason and his brother Stewart play. 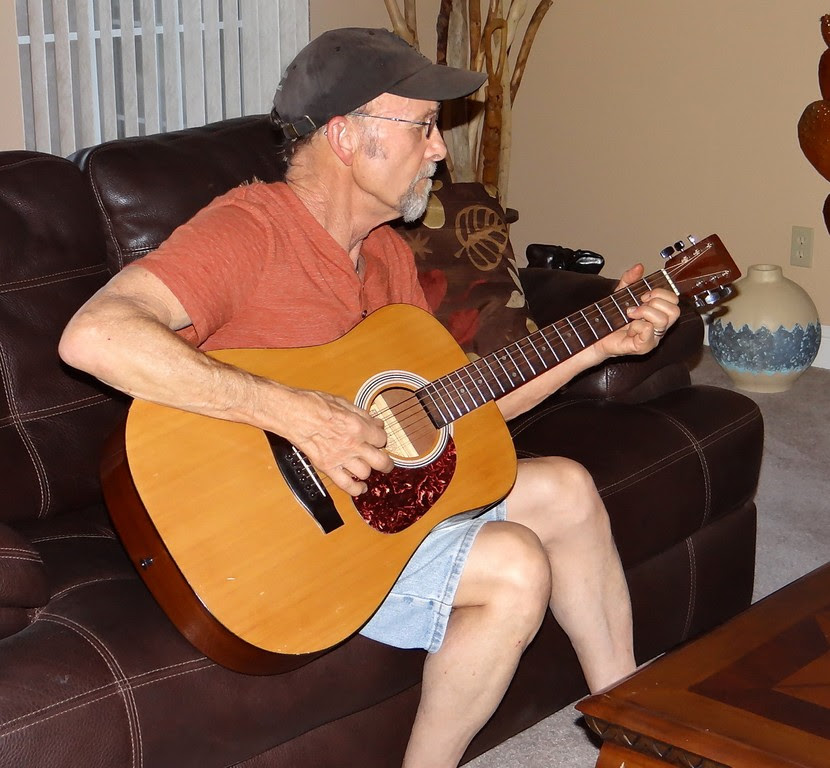 And Cedric discovered that Mike is a pretty good guitarist and played in a small band when he was young. 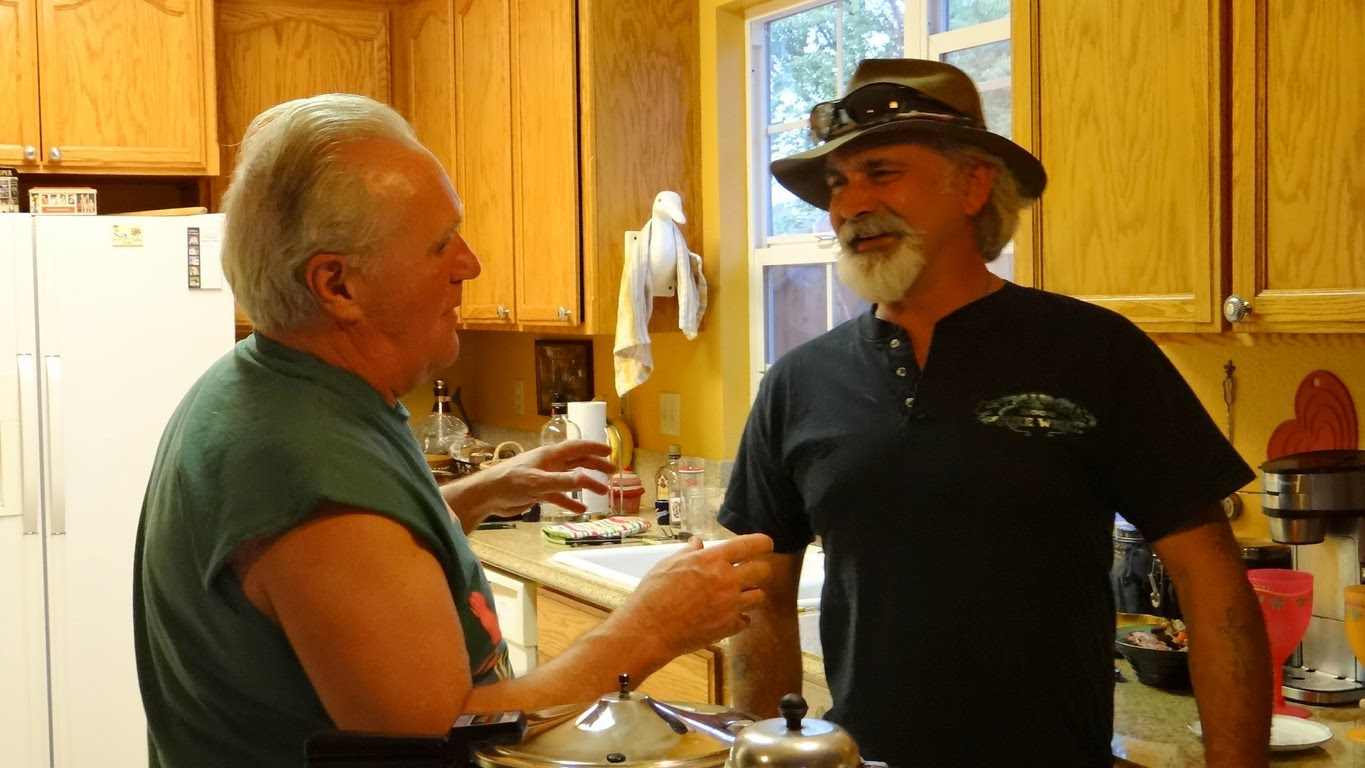 Jim found that he has a lot in common with Diane's significant other, Randy, who rides motorcycles, does a lot of camping and now likes going on trips in his 5th wheel. He kind of envies Jim's lifestyle of being a full-time RVer. 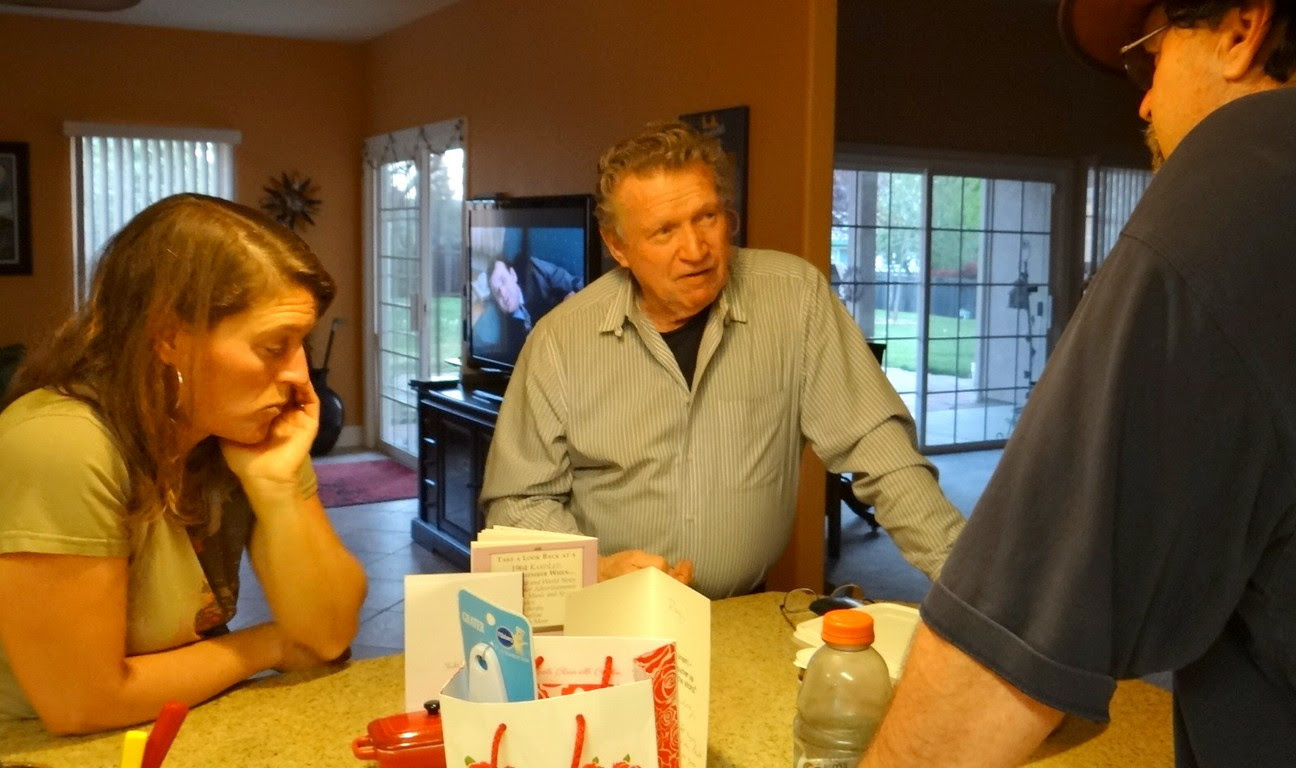 And, brother Bill, has gotten much of his sight back and no longer wears a patch. He was left with a bad astigmatism in his right eye and will soon have glasses to correct the problem. But, it is a great relief to no longer have to face double vision or wear a patch over that eye.  I kind of liked the looks of the patch. Thought he made a great looking pirate, but he couldn't toss it soon enough. That's fair. Hey, good food, good company, whose birthday is next?
Posted by Mary Matzek at 8:01 AM