THE LIBERTY THEATER AND RAYNE, LOUISIANA 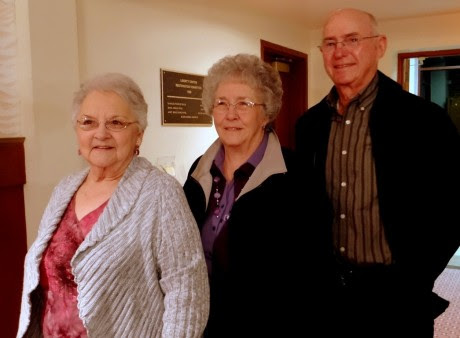 Jim and I often comment how lucky we are. We met Renola Simon and Sue and Cliff Granger in Lake Charles. We had planned on going back to Lake Charles to see them dance. A change of plans put us farther East, and Instead, we met them at the Liberty Theater in Eunice. Renola bought our tickets and we had no idea who was playing.

This is the setting. The narrator on the left, and some members of the Jambalaya Cajun Band. The narrator is also a curator at the Arcadian Museum in town. He, and a local man, the steel guitar player, are experts on Hank Williams. They have put on a Tribute To Hank Williams program for 14 years. 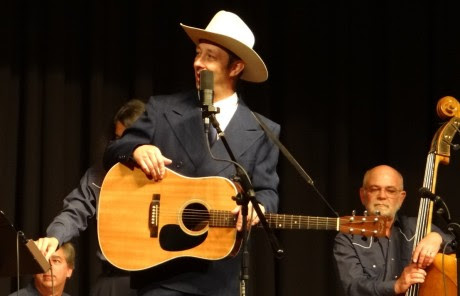 Hugh Harris is one of the Hank Williams Impersonators. He sounds eerily like Hank Williams.  Williams was prolific. He had 11 # one hits between 1948 and 1953. I remember harmonizing his tunes with my sister while washing dishes, “…slipping around on me…your cheatttttttin heart…” Oh, the memories. 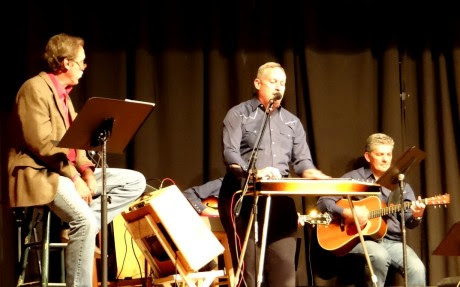 Terry Huval, not only plays the steel guitar, but he also sings and impersonates  Hank Williams. 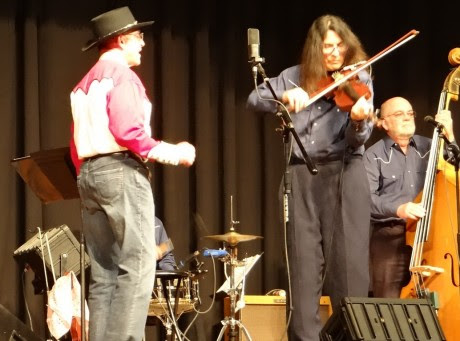 Pope Huval is another impersonator, here with the excellent violinist with the band. She is really good. 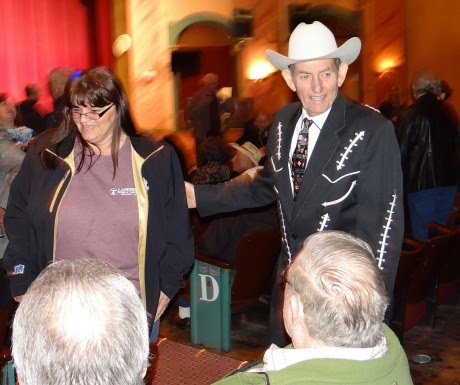 Eighty-two year old D.L. Menard is the fourth impersonator. He made a round of the crowds during the intermission. They tease him about his fancy clothes. He doesn’t look or sound as old as he is. He met Hank Williams when he was 19 years old. Hank gave him advice:  “When you sing you got to feel like whatever you are singing about, a broken heart or a party,  is happening to you.”  D.L. admits he didn’t get it-then. 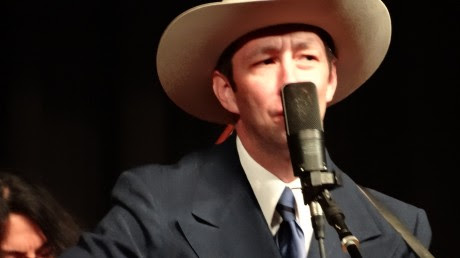 You can see the pain on Hugh Harris’ s face.  Picture taking on a lighted stage is kind of a hit or miss, and they didn’t all turn out well. 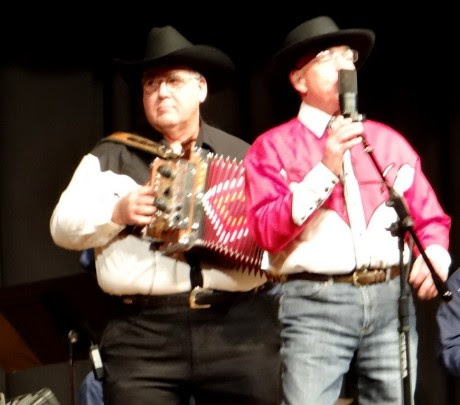 Hank Williams band didn’t have a drummer, nor an accordionist. But when the bands accordionist came on stage and played a couple of times, the crowd really voiced their approval. They are obviously very popular in the area. We had a terrific time. All of the impersonators were good. I heard songs of Williams’ that I’d never heard before. I didn’t know that he wrote some of them. He was not only prolific but varied in his style and we enjoyed the tribute as did the full house at the Liberty. 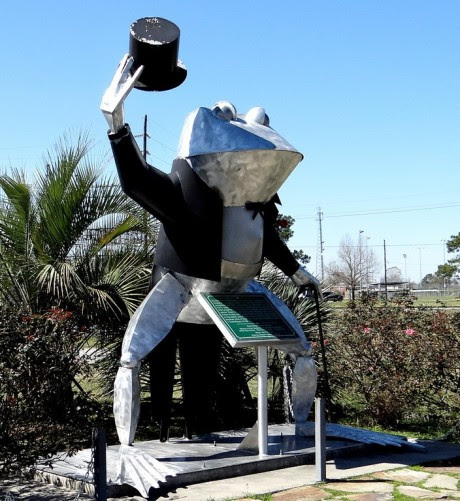 We moved on to a VFW within range of Lafayette and other nearby towns we want to visit. We had no intention of stopping in Rayne, which bills itself as the Frog Capital of the world. In fact, we passed through here in 2010 during a drenching rain. Jim stopped, I ran into a mom and pop grocer and asked why it was called the frog capital of the world?  The guys in the little shop said they didn’t know?  It is personal with me. I’m from Calaveras County, which bills itself as the Frog Jumping Capitol of the World and we take our frogs seriously. My boys graduated High School as Bullfrogs. 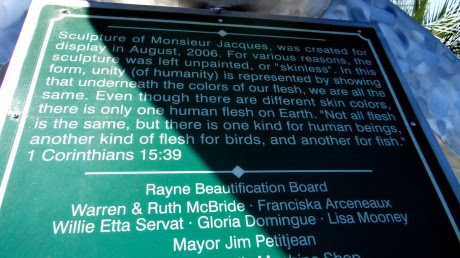 The gray frog had an interesting plaque about humanity in a racially mixed Southern town. 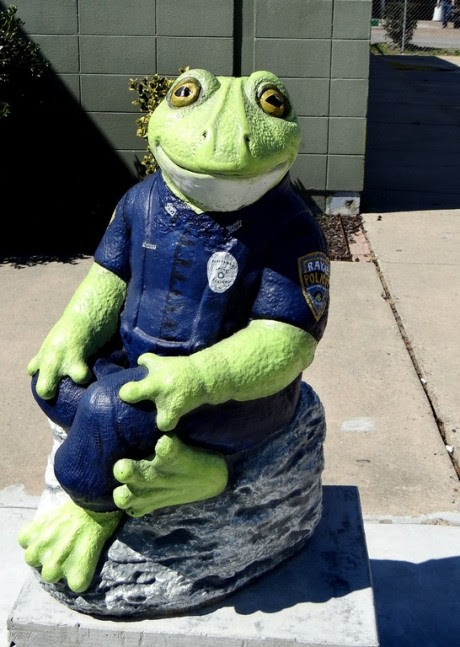 We saw cute painted frogs all over town. This one in front of the Police Department. 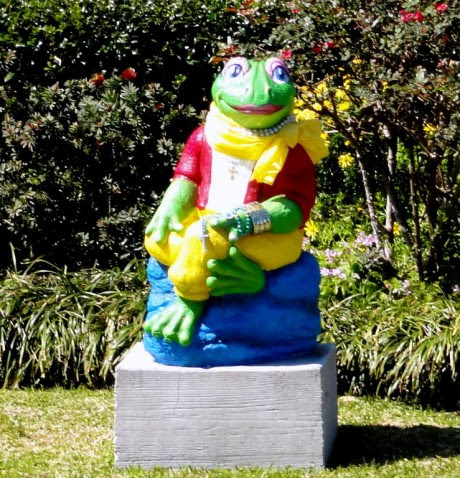 They are cute, but not as cute as OUR painted frogs. (My kids would call that sour grapes.) 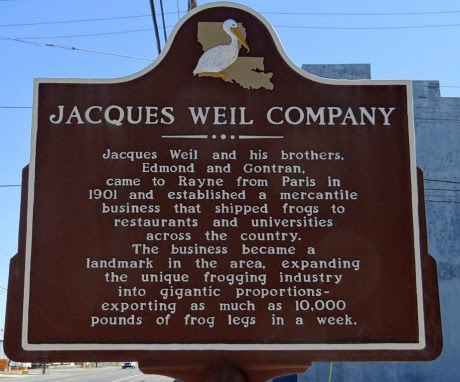 And then…and then…? I found out why they call this the frog capital of the world.  OMIGOD. People in my county would balk if anyone even suggested eating frog legs. That is a no,no. We like our frogs hail and hearty. Of course, I’m playing here. But the truth is, Mark Twain wrote the tale “The Jumping Frog Of Calaveras County.”  People do come from all over the world to jump frogs during the Calaveras County Fair and Frog Jumping Jubilee.  Mayor La Guardia came to the jumps in 1931,  I believe was the year. Anyway, Jim looked on a website and it turns out they dress frogs in jockey uniforms and have a frog race during their festival. I’m sure they deserve their title. 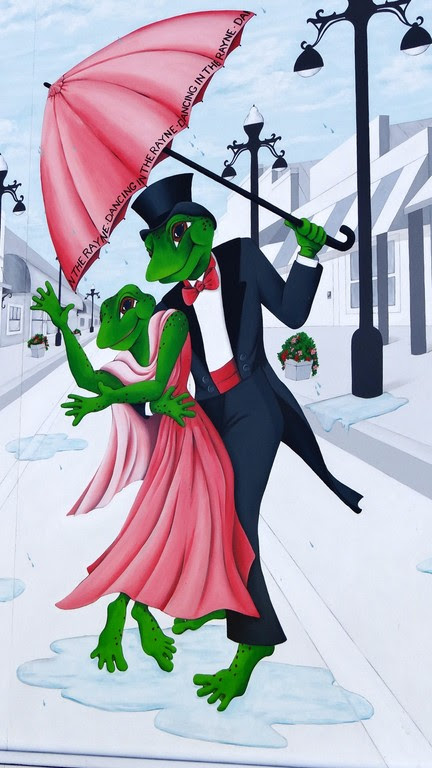 They also refer to Rayne as the City of Murals, and they do have many of them. Hey, it is all fun.
Posted by Mary Matzek at 6:22 AM

Tomb Raider, Mega Moolah, Mermaid's Millions, and Blackjack are some of the new Android game apps that have been released from Microgaming's partner, Spin 3.

The reason for this rather strange feature is that, as described above,
apps in the Android Market are listed as they are submitted, without
any testing.