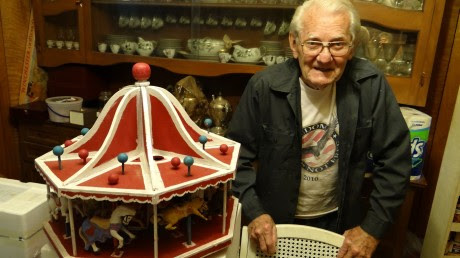 Meet Nolan Barras, a skilled wood worker, carver, model builder, stained glass artist, painter, furniture maker, clock maker and probably other crafts I know nothing about. He is uniquely talented to be capable of such varied work and all of it self-taught. 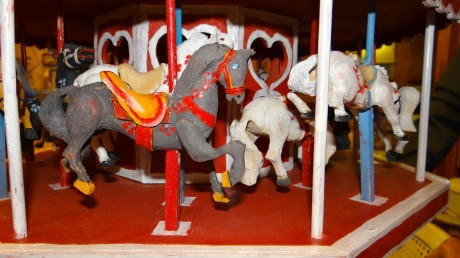 He was just putting the finishing touches on his current project. All of the horses move up and down on their posts. When finished it will have a motor to make it go around and play music. 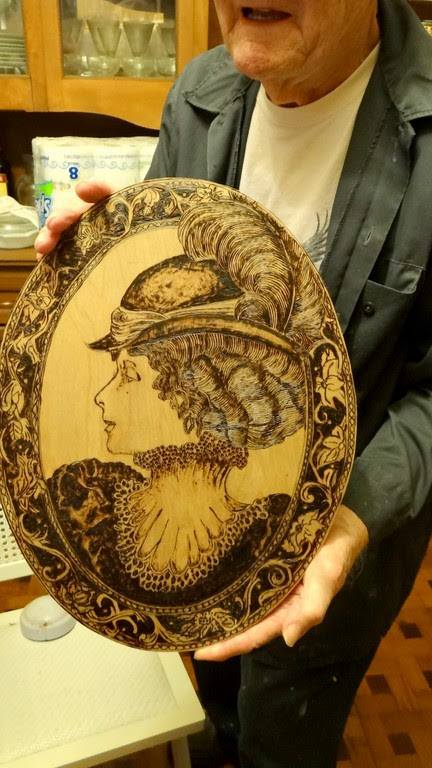 Here he holds a beautiful wood burning he did. 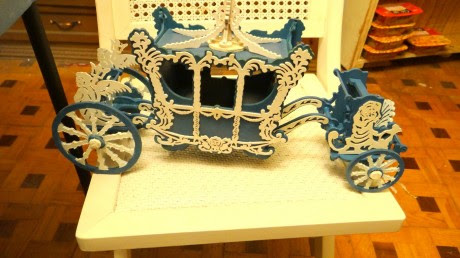 He has about ten of these carriages, fully assembled and  waiting to be painted. 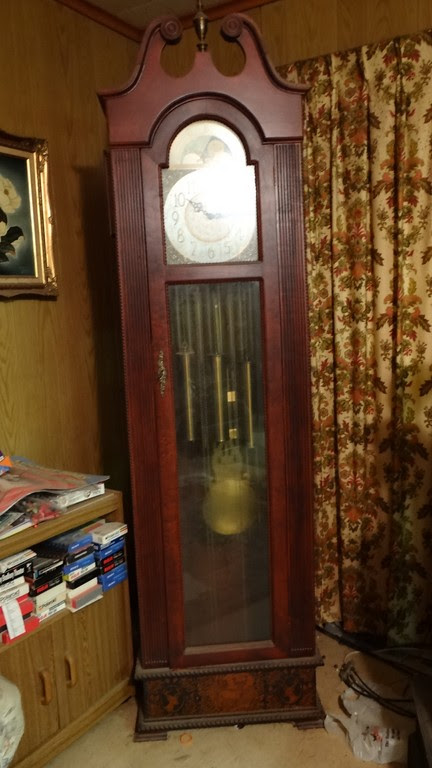 It all started with this clock. He built it from scratch when he was a young man. He saw a picture of an expensive clock and he thought, I can do that. 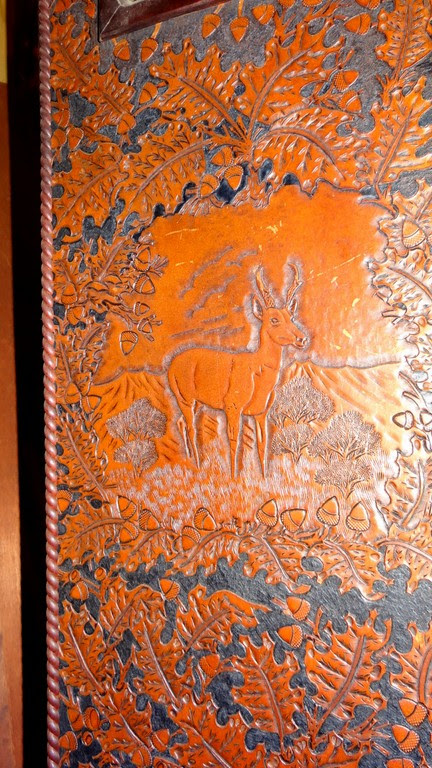 Both sides of the clock are hand tooled leather. He got married, had children, worked and never did another wood working project for 30 years. “I always liked doing that clock and I finally got time to play with wood.” 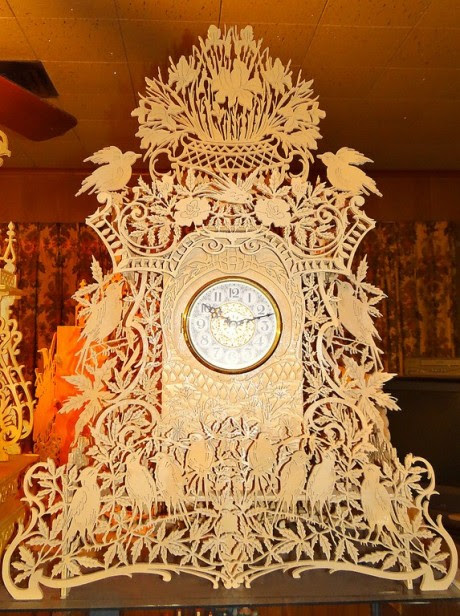 There are clocks all over his house. 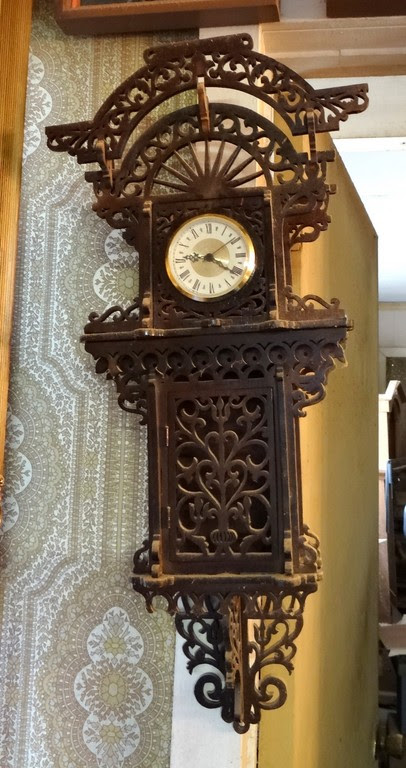 He must have had 100 clocks in his house and workshop. Anyplace you could put one. 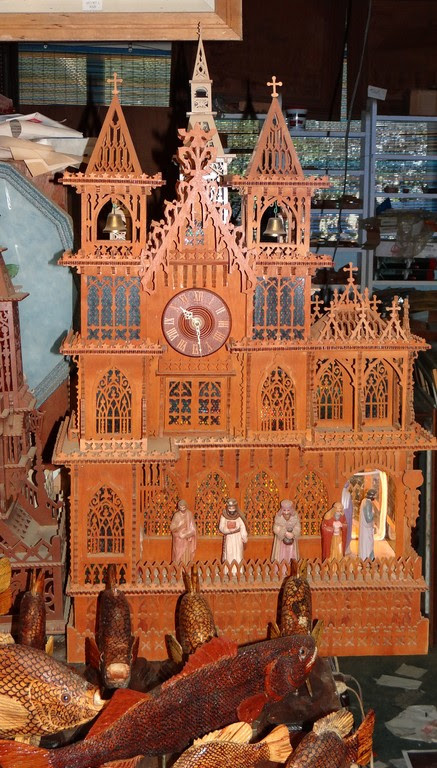 And if you are going to build clocks, why not a lighted cathedral with figures that travel around a track and go in and out the door.

You can see that pendulum is moving. Luckily, he doesn’t have to hand wind any of these model clocks, they have a battery. Nolan sends for the kit, but all of that filigree work is carved  by him and he has the right equipment to do it. Then he assembles them, sands and paints them. 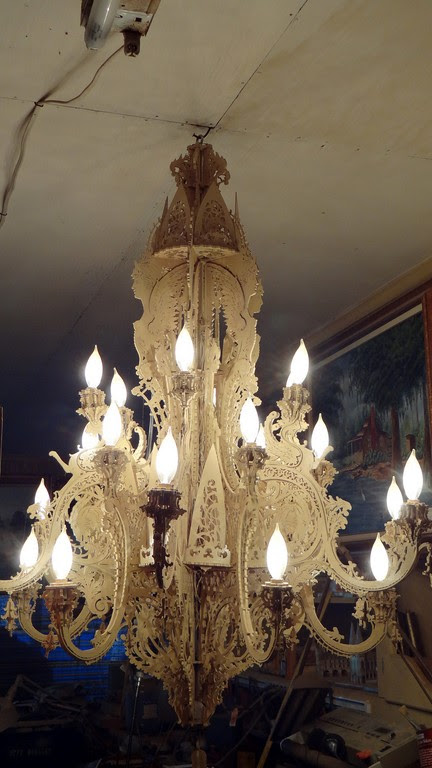 And, if you are going to make a lighted chandelier?  Why not five of them?  There were two already cut and assembled on the floor just waiting for their bulbs and electrical connections. 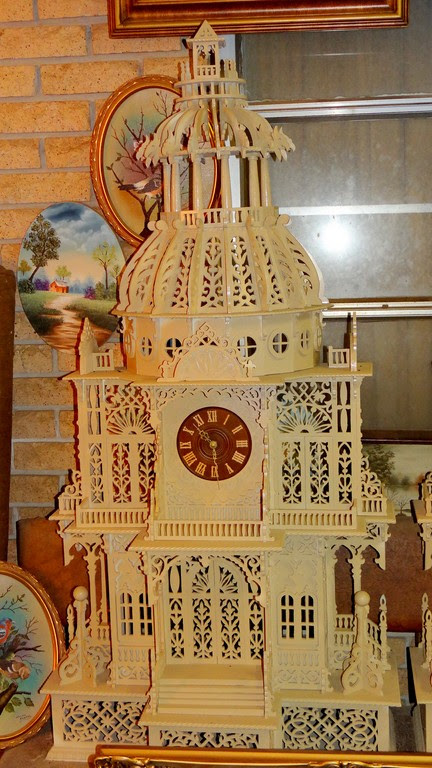 The clocks were a dominate theme, but this man’s talent amazed us. 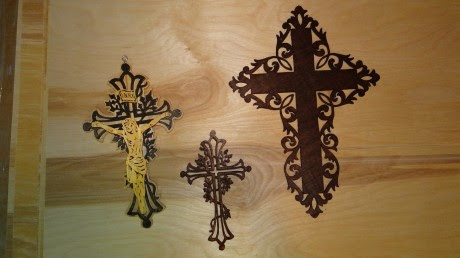 He had hundred’s of crosses, of every size available,  already machine tooled. Why so many, asked Jim?  He said, “I gotta have something to do and this is what I like to do.”  He is 86 years old, and we saw no television in his house. He reminds me of older people who give you the secret of their longevity when you ask.  “Just keep a doin’”, is the usual answer. 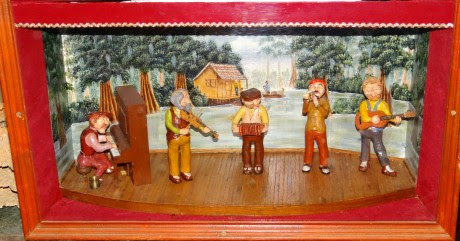 He builds dioramas and hand carves and paints all the figures like this Cajun band. 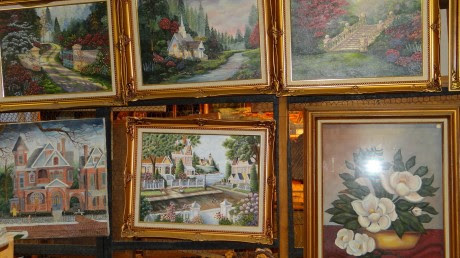 Did I mention that he paints?  There isn’t enough wall space so he built rows of screens from which to hang them. 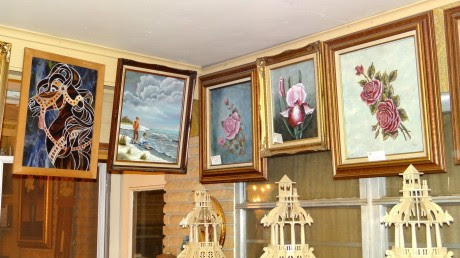 Every nook and cranny of his house is filled with artwork of one kind or another. The carnival horse on the left is an example of his stained glass work. He did small cathedral kits made from paper. He said he had more trouble assembling paper creased churches than the wooden ones. 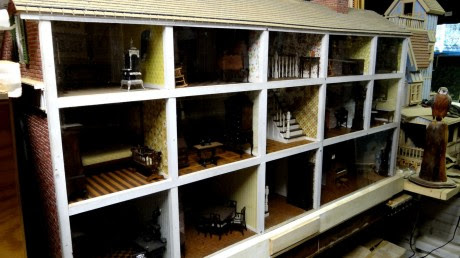 Then there are the doll houses with his hand carved furnishings. This one must be five feet long. 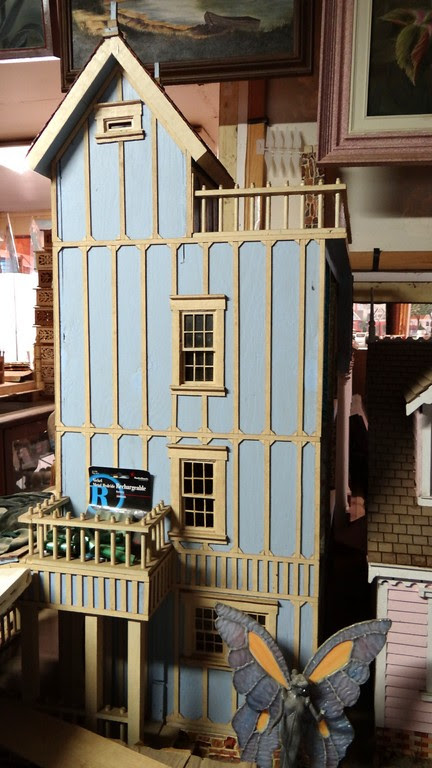 The center of this room is filled with buildings. The glass figure of a “female”  butterfly is more of his stained glass work. 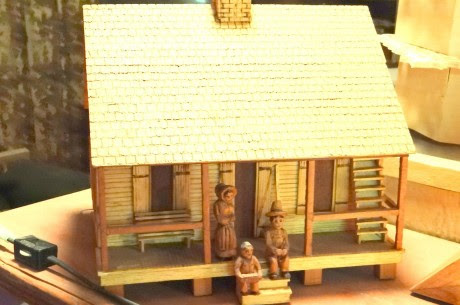 Some of the buildings are small; many are lighted. 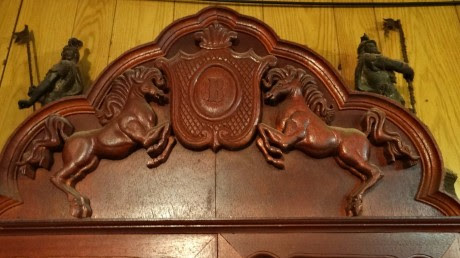 In some years past he skillfully hand carved and built a credenza. This is the top piece with his initial. 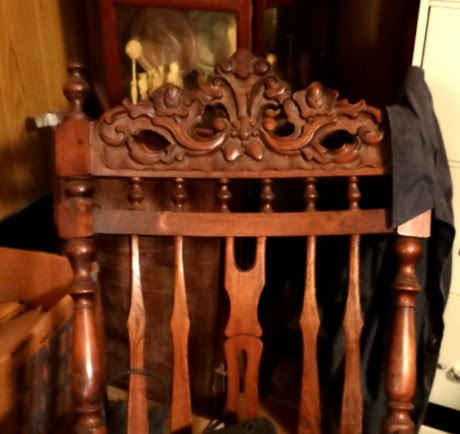 He no longer has room for big projects. At one time he and his wife had a store where he sold his carvings, but it has been closed for many years, and his wife died six years ago. 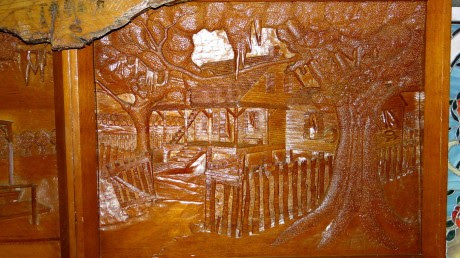 He hand carves pictures on beautiful woods and shellacs them. 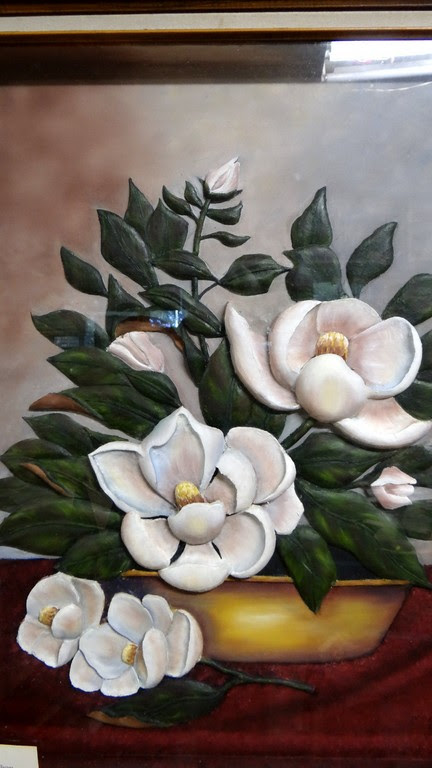 Some of his hand carved pieces are painted and framed like this bowl of flowers. The flower petals are 1/2 and inch thick. Very unique. 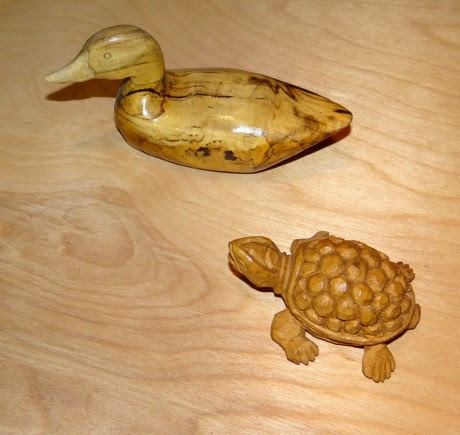 With all the ends and pieces of wood, he carves little figures like these. He has them by the box full. He has two places that sell his work. “They sell a little.” he says. 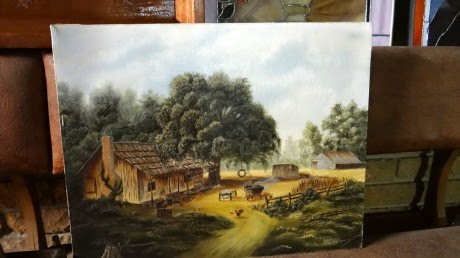 When there is no room on the wall, the paintings sit on the floor and lean against something. 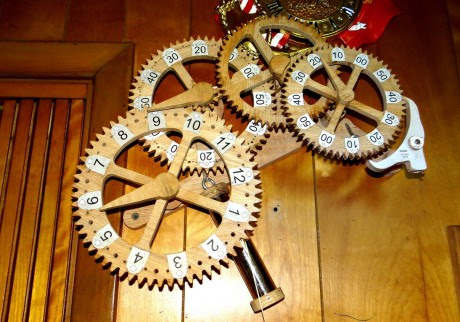 And, if you build clocks you collect clocks, too. He had several old clocks and then this Rube Goldberg type clock. He’ll probably figure out how to build one  some day. He is so multi-talented and skilled. It was a pleasure to meet him and he enjoyed showing us his work. Jim marveled at his eyesight, that he can still see well enough to use fine power tools and sharp carving knives. I’m so glad I got to meet Nolan Barras of St.Martinsville, Louisiana.