NO PARADE BUT GOT THE GHOST STORY. 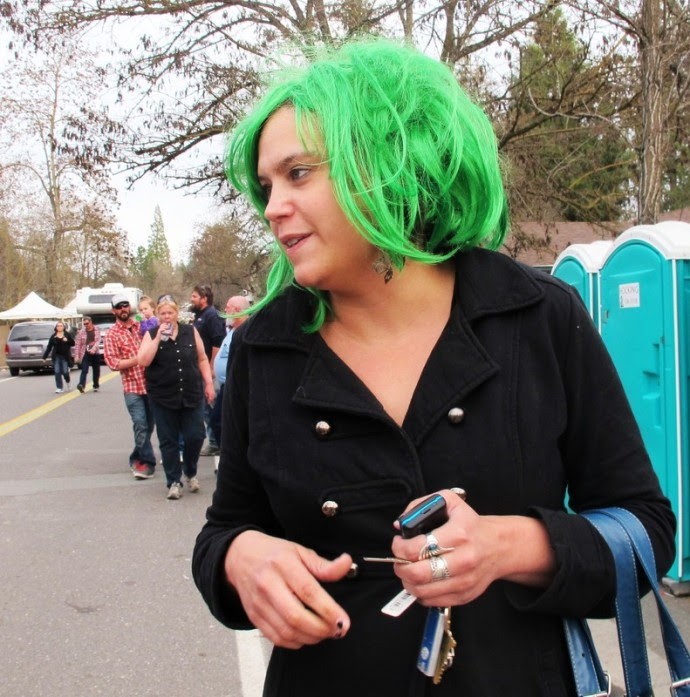 Today is St. Patrick’s Day, celebrated in Murphys yesterday. Since my mail is by the pound, I read a notice the parade would be on Sunday. I stumbled onto the corrected date in a later notice. Went late, missed the parade, had a good beer, enjoyed the green hair, the bands, and best of all, I got a ghost story. 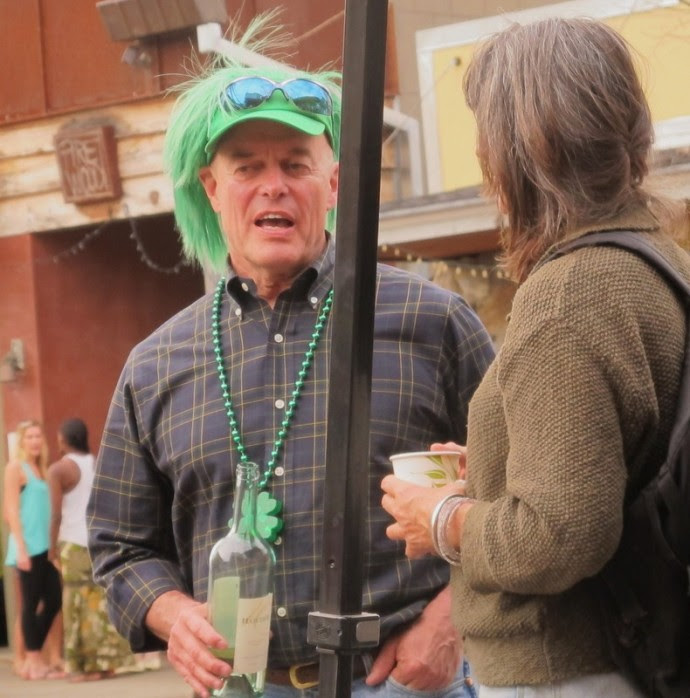 Not everyone wears green hair, of course, but everyone has fun. I know this guy is bald, so he enjoyed his hair and later let everyone try it on. 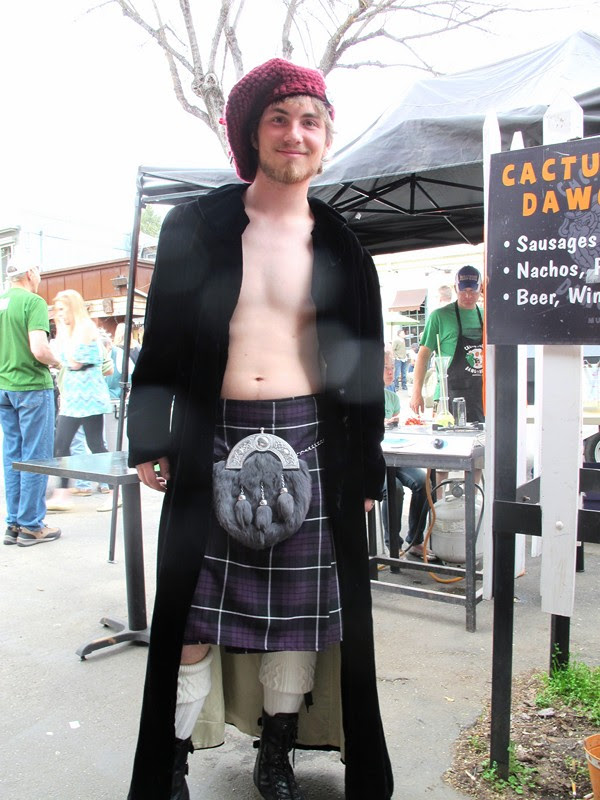 Others take their costumes seriously, as this young man very authentically dressed. 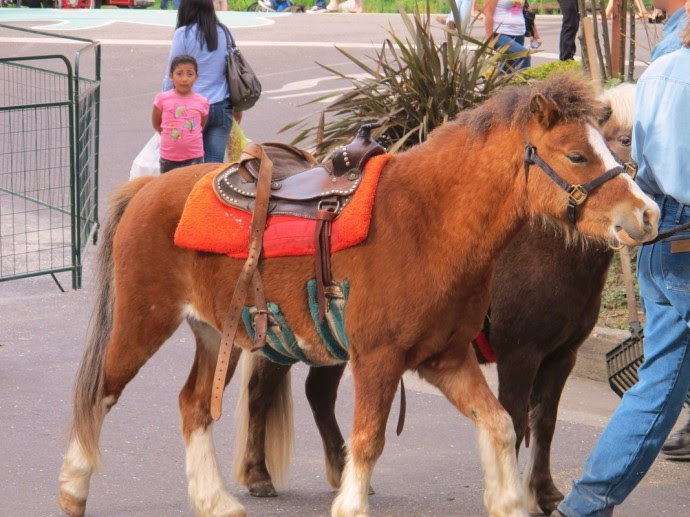 At 3:30 in the afternoon, the pony rides were starting to pack up and leave. 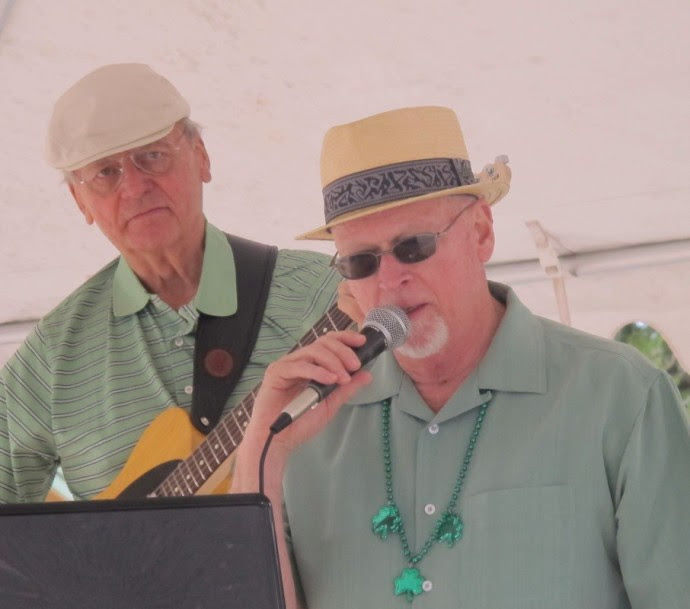 The main band stand on the street was  still pumping out tunes. 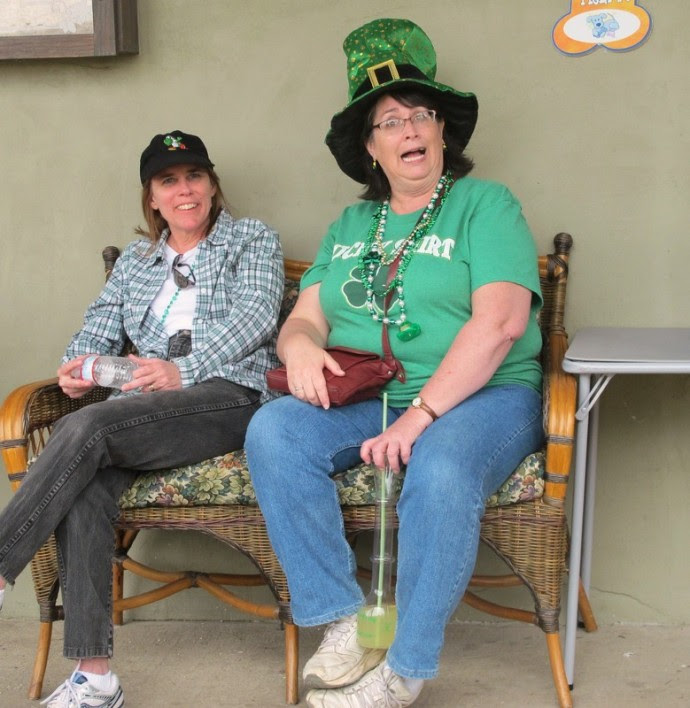 There were a lot of places to sit, and Jan and I enjoyed a huge pretzel at Cactus Jacks. I had my first dark beer since getting home. The woman on the right is holding the tallest green margarita I’ve ever seen. They were all over town. 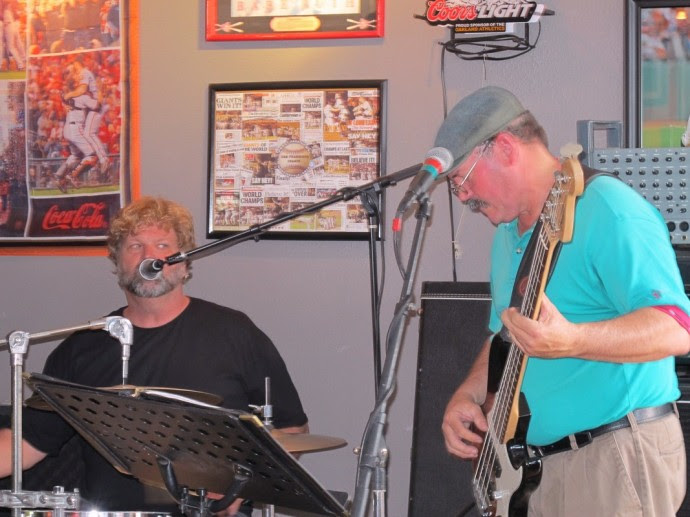 Jack’s rock band was so loud and the dance floor so crowded, we sat outside and still had to shout at each other to be heard. 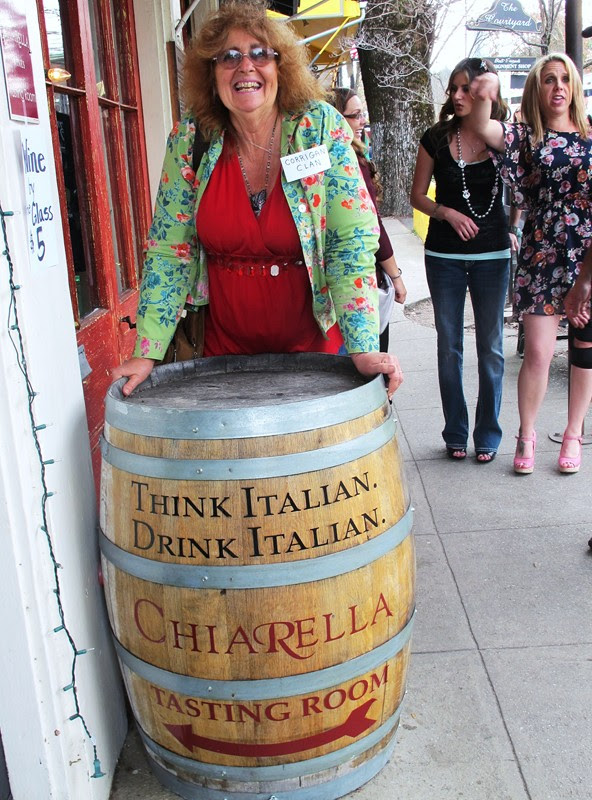 Jan doesn’t drink but a sip of wine now and then. She is Italian so I had to take her picture by this barrel.  Every time I come home, there is a new tasting room in Murphys. 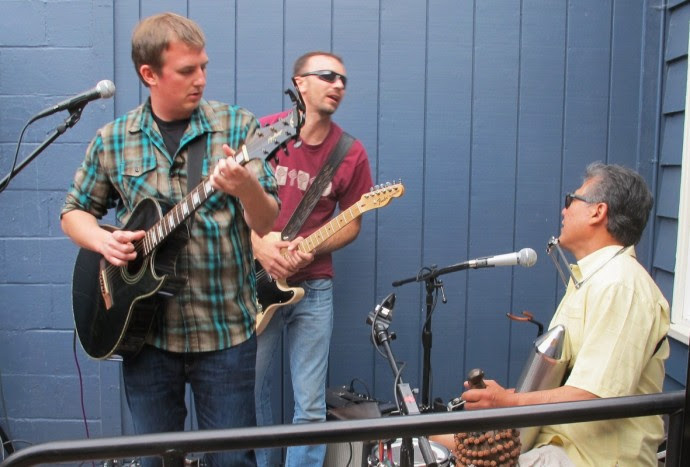 Newsome-Harlow’s courtyard had a good band. 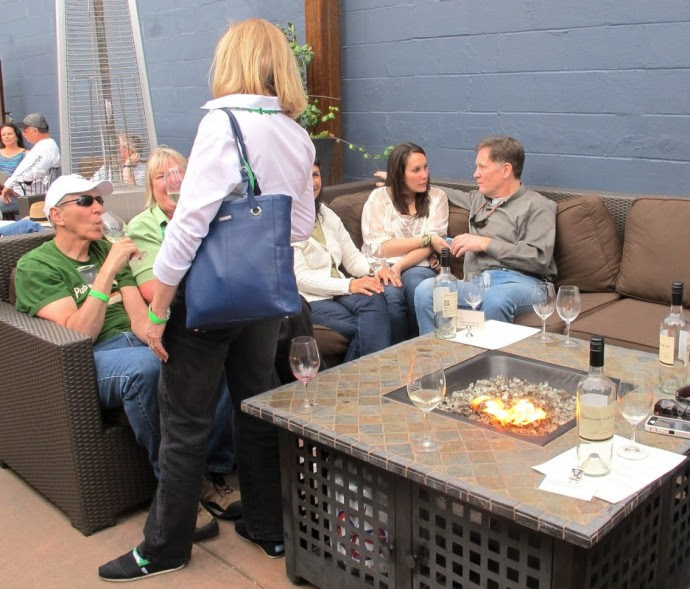 Their courtyard is a pleasant place to sip and chat. The fire was going in the pits, even though the weather was perfect. 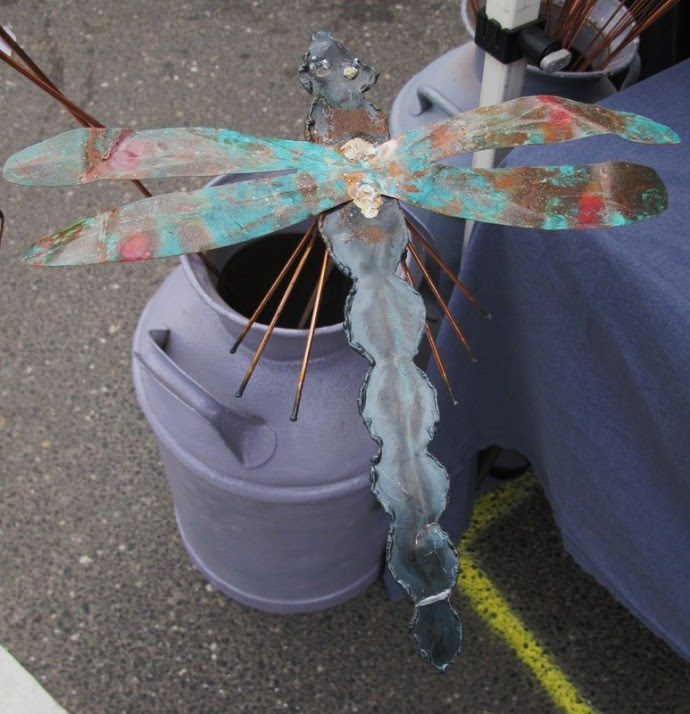 Jan found a dragonfly to put in her pond. 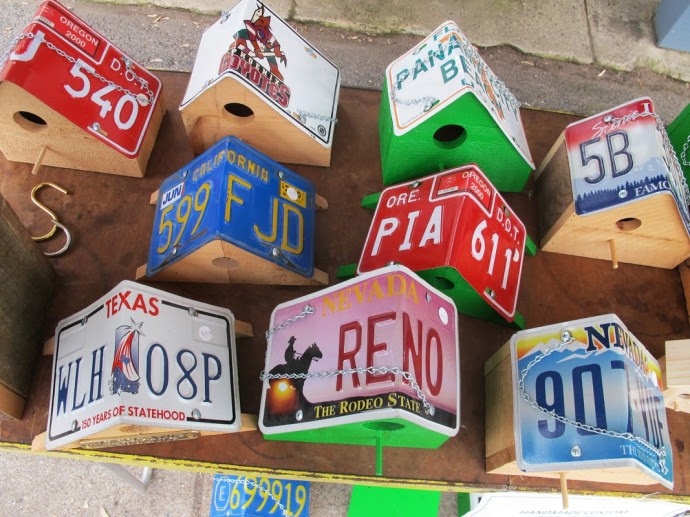 I found some cute bird houses, but didn’t buy. I liked the idea of a waterproof roof. 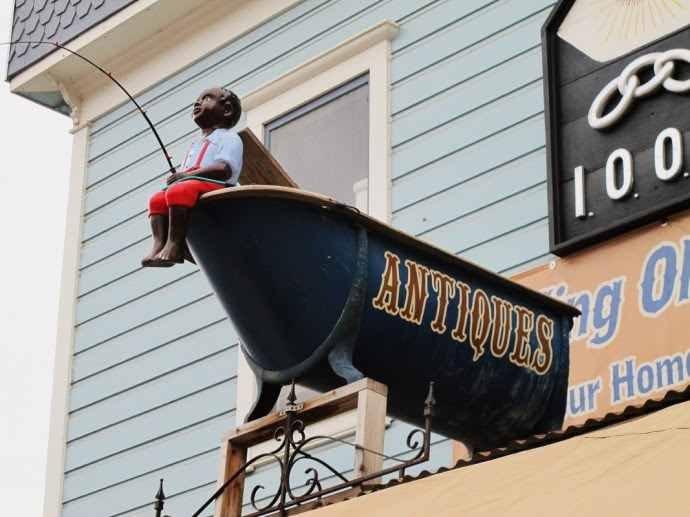 We got to the end of the street, Tom Scheller, the owner of the IDEA store, pointed out some fun stuff he added to his building, which is the old International Order of Oddfellows building from the Gold Rush days. A woman standing nearby said, Have you heard about the ghost?”  Me:  “What ghost?” 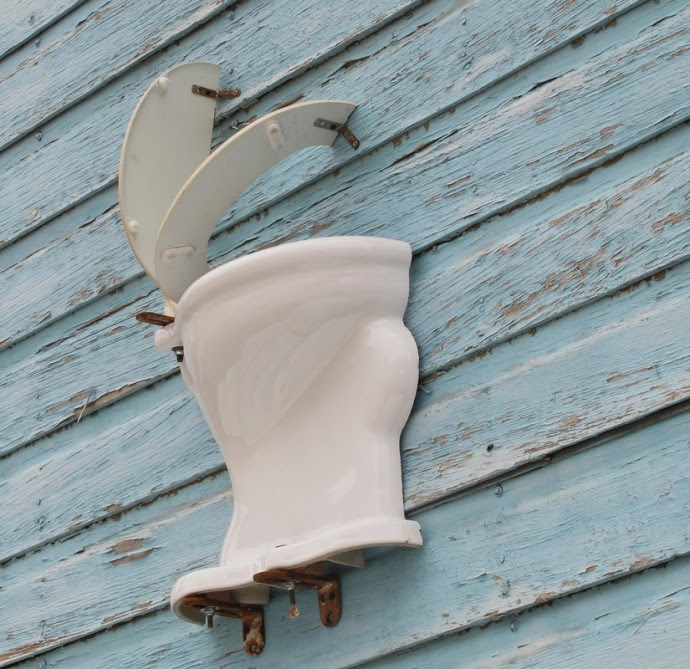 Tom was getting his stuff moved back inside, ready to close up for the day. Tom and I were in Murphys Merchants Association together many years ago. He bought the building 37 years ago and I’ve been in Murphys 35 years. I regard Tom as a down-to-earth credible guy. Hey, Tom?
This is the story he told me. “I’ve always heard creakings and what sounded like footsteps in this old building,  mostly when I went upstairs. He took Jan and I to his side door where the stairs can be reached from the outside, and a second door leads to his main display downstairs. “I had just locked my outside door. The door to my showroom was closed. I started up the stairs and I heard heavy footsteps coming downstairs. I backed off and decided to turn around when a whoosh of cold air hit me, the footsteps passed me and I heard a click of my  showroom door as though something passed through it. I’ve had people get spooked when visiting the upstairs showroom over the years, they described it as a feeling of someone watching them. I’ve always ignored it. But, we’ve had some activity downstairs too.  I or my employees have been sitting behind the counter, working on the computer or whatever, and papers will be picked up off the top of a file cabinet and dropped to the floor. Things have moved off the shelf and been dropped on the floor. We always joked about a ghost. We have a non-smoking environment here, but I’ll open up some mornings and find a wisp of cigarette smoke hanging in the far left corner of my shop. Then one day, a physic, who was touring with some people, looked up and said, you have a ghost, his name is Joe, he is sitting right there. She pointed to where I see the smoke periodically. I was still a bit skeptical but one day, I was doing some remodeling upstairs and I opened up the floor boards and found three bricks, one imprinted with the name Joe. I’m convinced now that I have a ghost.” (Me too.)
Posted by Mary Matzek at 8:33 AM