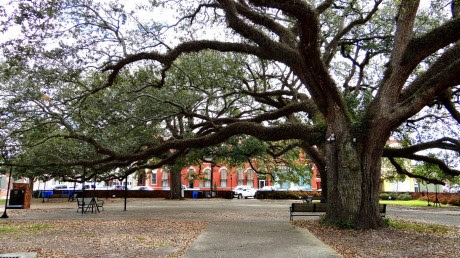 Abbeville is a small, old town with a couple of jewels. One is Magdalen Square. The square has precious ancient oaks impossible to fit in your camera, so you must go and look for yourself. As you can see one tree can easily cover  a city block. 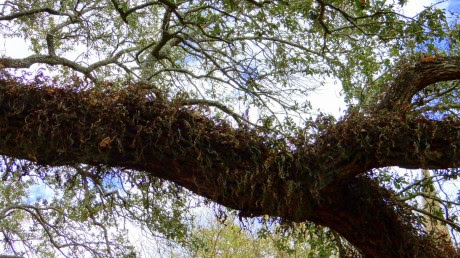 These old oaks are often covered with rattan, commonly called resurrection fern because it turns brown when dry and green when it rains; a plant we see often on oaks. These trees have earned their whiskers. 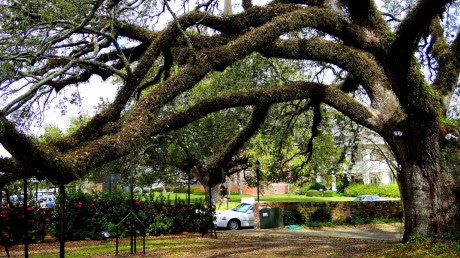 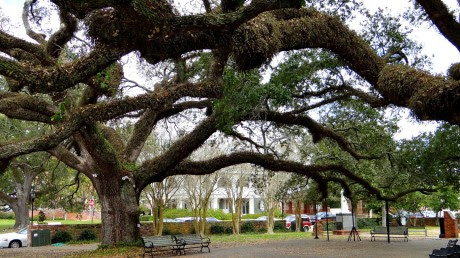 There are four of these giants, if memory serves. So huge, their branches mingle until you cannot actually take a picture of a single tree without getting parts of another. In a word, magnificent. 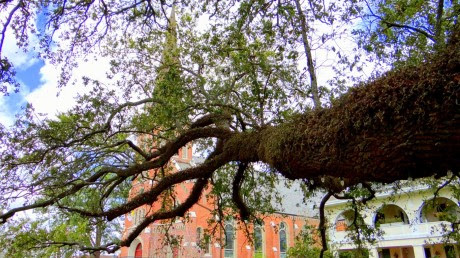 Across from the square sits the St.Mary Magdalen Church with a tree branch looking like a giant hand reaching for the building. 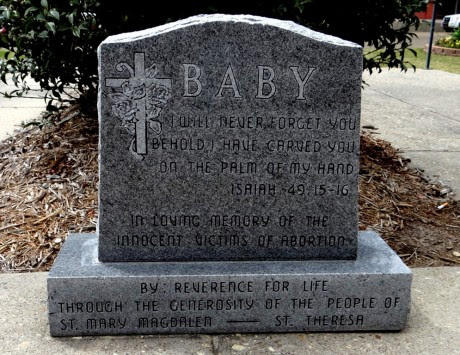 I look for something unusual wherever I go and I’m rarely disappointed. This tombstone sits in front of the church. 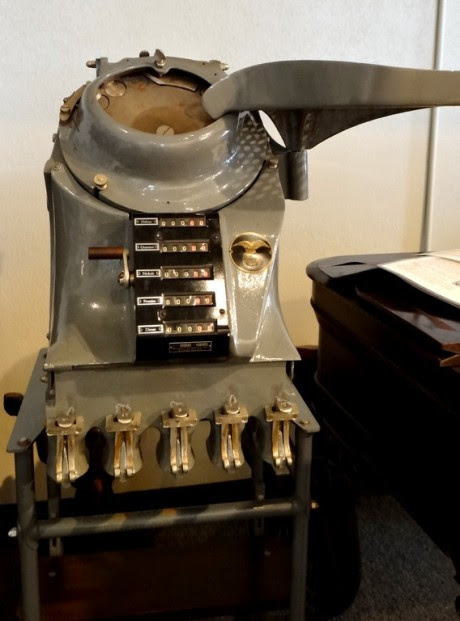 In the cultural center/museum/gallery, as usual, I found something I’d never seen before. This item is a change counter used by the church before they started handing out envelopes and urging people to put bills in the collection basket. 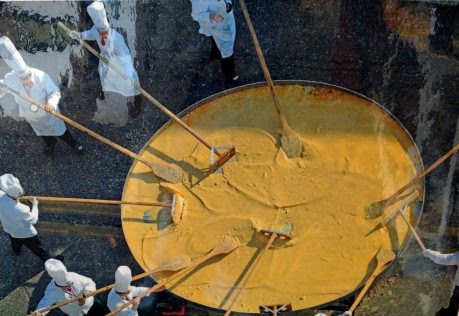 In the cultural center, I discovered the second jewel of Abbeville. Well, great pictures of their Giant Omelette Celebration. If you decide to come, it is held the first full weekend of November every year. You are looking at the cooking of a 5,000 egg omelette. 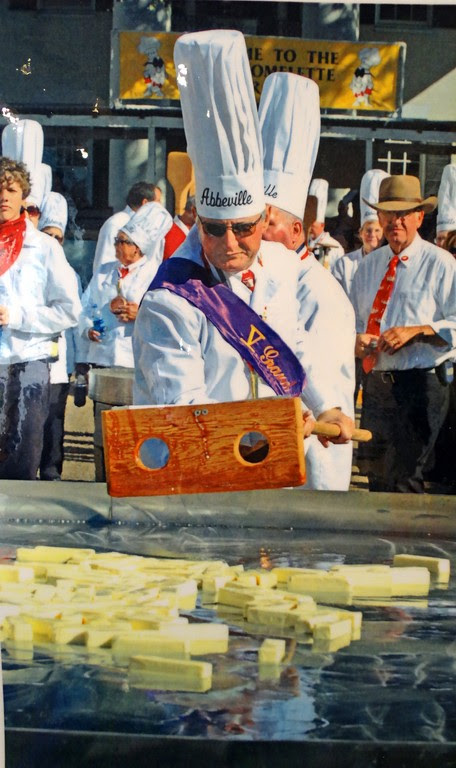 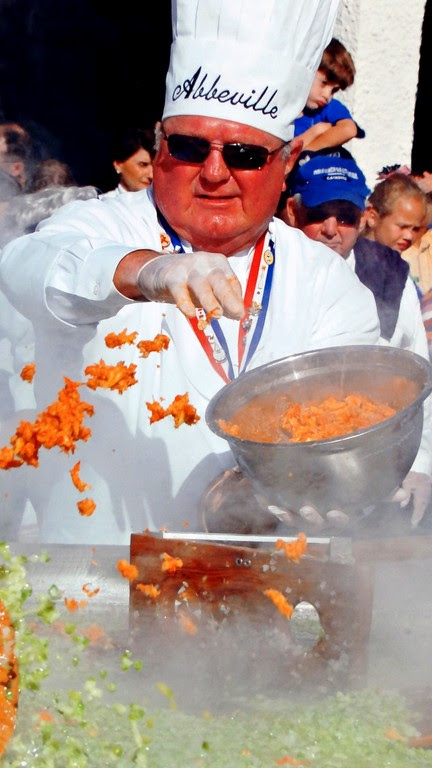 To the original recipe, the chefs now add crawfish tails. After all, this is Cajun country. Ya gotta have crawfish in your omelette. 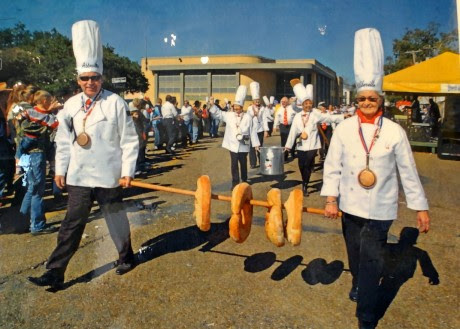 And hot french bread to eat with it. 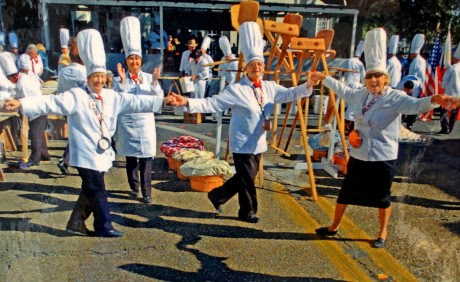 Can you tell these people are having fun? The festivities include a Procession of Chefs, and an antique car show, etc. and etc. Everybody who wants a taste of the omelette lines up. It is free. But the tradition began with Napoleon. His army was traveling in Southern France and they stopped in the town of Bessieres to rest. A local innkeeper cooked him an omelette which was such a culinary delight, he ordered the townspeople to gather eggs in the village and prepare omelette for his army.  It then became a tradition to cook a giant omelette to feed the poor of the village at Easter. Of course, the tradition spread to other villages in France and eventually to the little town of Abbeville. 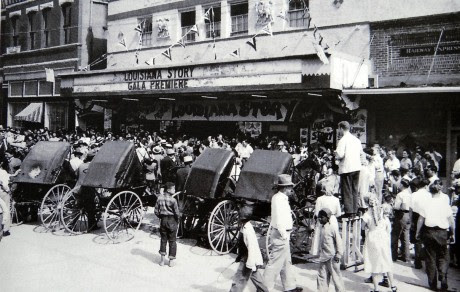 The cultural center has some great old pictures and history. This from the premiere of The Louisiana Story, a movie that was filmed on Weeks Island. The movie crew stayed in Abbeville. 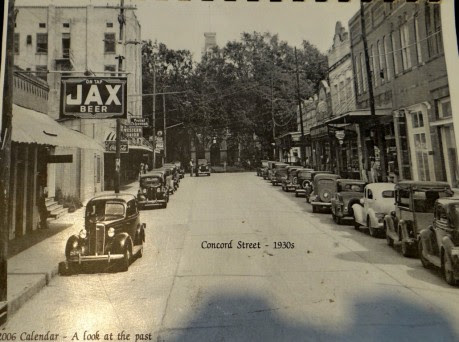 I was surprised to see JAX beer in the 1930′s. There is a JAX brewery in New Orleans and I thought it was a new beer. A series of photos showed the ravages of Rita. Much of the town was under water. Pretty horrific. 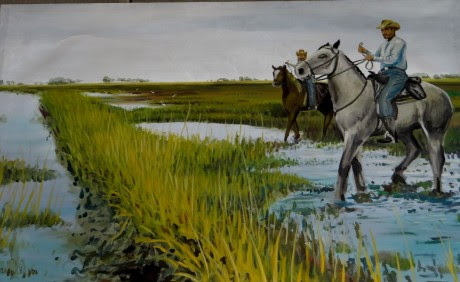 The center hosted a children’s art exhibit while we were there. This one was my favorite from their permanent collection, by Robert Baxter. 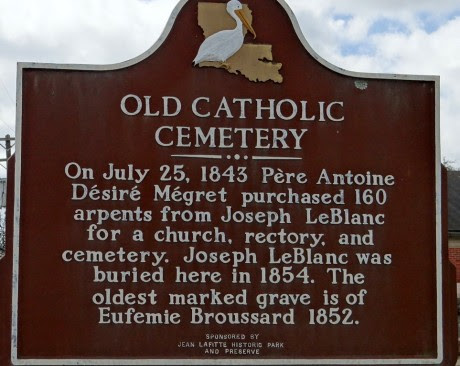 We took a pass through an old cemetery next to the church. Everything we saw was within walking distance of our parked car. Easy and neat.
Posted by Mary Matzek at 5:48 AM