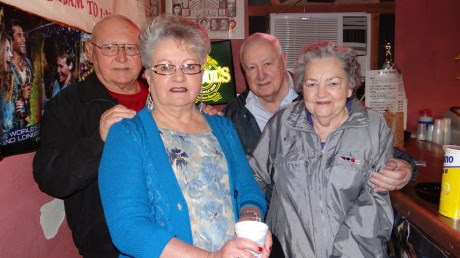 At Fred’s Lounge, you arrive early if you want to sit. It opens at 7:30 and we were there. In the back corner was a couple we recognized (right) from our visit in 2010. They’ve been coming here every Saturday morning “forever” to dance. No one sits in “their” corner. He taught me the Cajun step in 2010. He told me then, it’s unfair, but the woman dances backward almost the whole time. His wife confided she has a bad knee and doesn’t dance every dance anymore. I have no idea of their age, but their warmth and affection for each shows as they dance. They are a treasure. 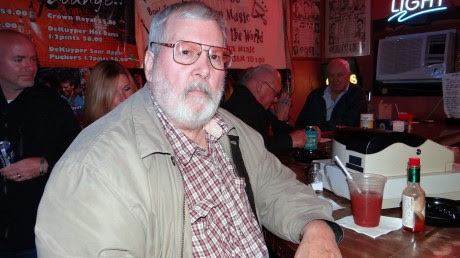 This  very informative guy was my seatmate. He is Lewis Landreneau, a regular who knows all the band members and most of the people who come in. His uncle, Cyprien Landreneau played Mamou’s lounge at one time. He showed me his picture on the wall. He was an 18 wheel truck driver and doesn't play music. 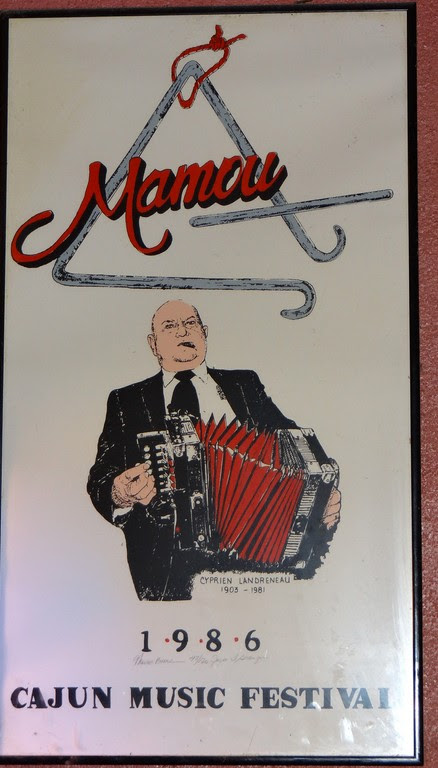 He looks like a fun character with a seegar in his mouth. 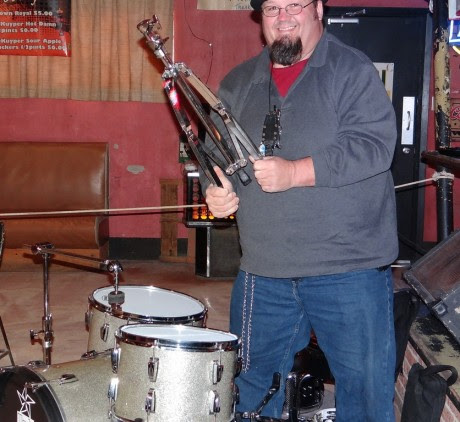 We watched the band set up. 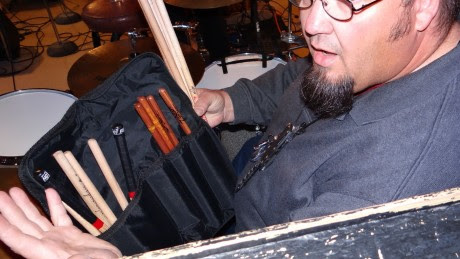 The drummer has a handful of sticks in his right hand and a case of others to choose from. What do I know? I thought a drummer had one set of sticks and a couple of spares in case one broke. 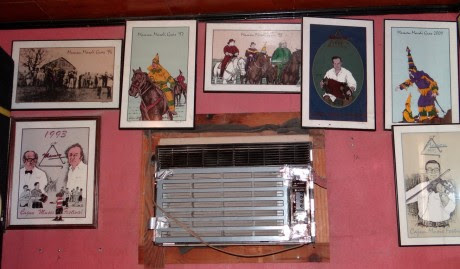 Everywhere you look, the lounge is covered with pictures. It is fun to look at them, even if you don’t know who they are. 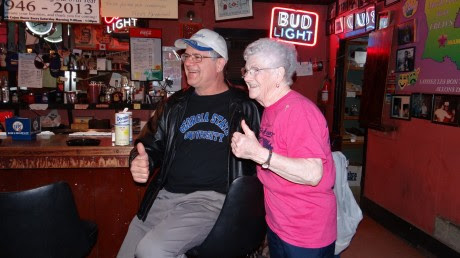 Tante Sue made a pass through the bar after visiting with her “rest home” friends. She is a volunteer at a local rest home and makes her rounds every day.  In the bar they spell auntie Tante. On the wall of ovations they spelled it Tauntie? Everyone likes to have their picture taken with her and she enjoys her legendary status. 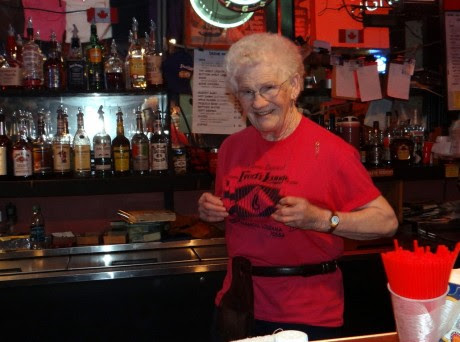 Later on, when the bar got really busy, she came back to lend a hand. She plays her accordian on her shirt, and she wears her signature holster from which she sips and wipes the bottle and hands it around if anyone wants a sip. In 2010, when she sold a bottle, she would taste it before passing it on to the customer. And, later still she sang (in French) with the band, talked on the radio, and reiterated her rules for the lounge. One I forgot to mention in my blog yesterday, is the NO MOUTH KISSING. That’ll get you thrown out of the place. You can kiss on the cheek while dancing, that’s it. 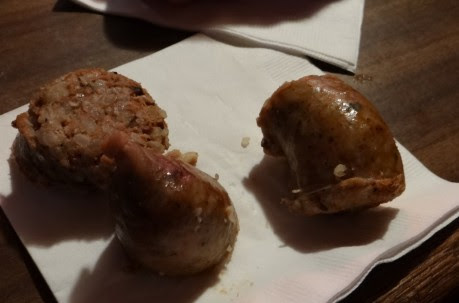 She passed around cooked boudin sausage, which is seasoned pork and rice in a casing, wonderful stuff to eat. We took one piece and she insisted we get a napkin and take four more pieces. We normally don’t eat pork, but in Southern Louisiana, all such dietary rules are tempbypassed. 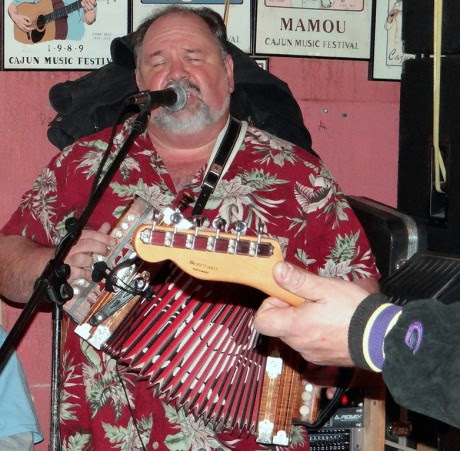 The accordion player is Don Fontenoc according to Lewis. The band is Friends Of Louisiana. His accordion has the signature crawfish design of Martin Accordions, a place we visited and enjoyed in 2010 as well. 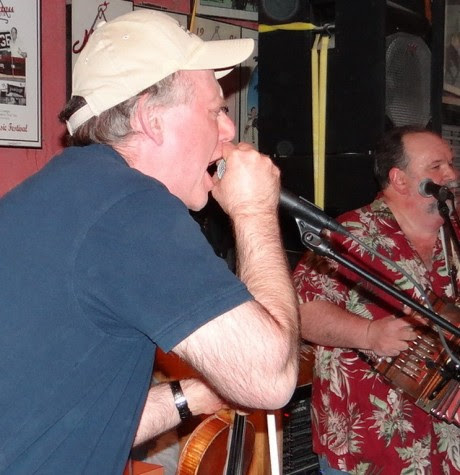 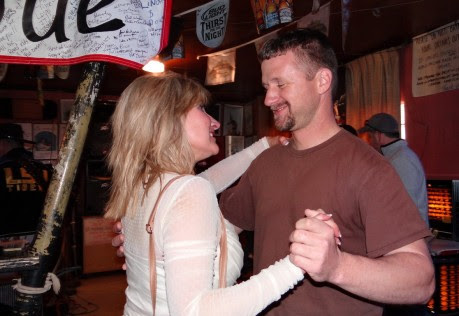 I enjoyed watching the band, the dancers and the people. I took a couple of pictures before the dance floor got too crowded. 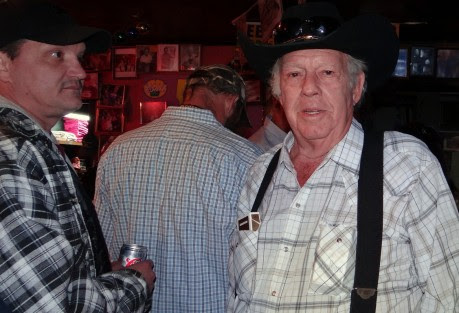 This old bow-legged cowboy comes roaring through the door dancing and makes hardy round of the floor before he grabs a brew. A regular, his name is Herman and he really whoops it up. He dances with all the women, young and old and there is no doubt he is having a grand time. When he does a jig I tried to get a video, but about the time you get it started, he’s done with the jig. 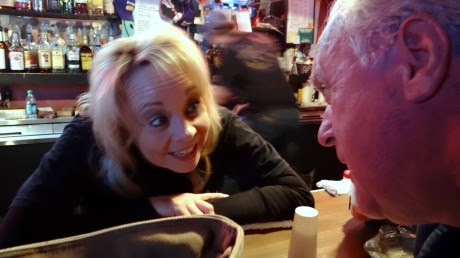 After awhile the bar gets so loud you have to shout, even to get a drink. This cute bartender was working our last visit. What a fun time to be sipping a bloody mary, enjoying the music and the circus going on all around you. Loved it!  Thank you Tante Sue for your wonderful hospitality. 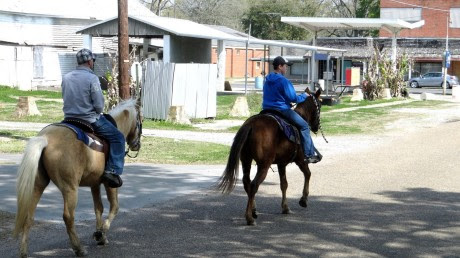 Then as we were leaving Mamou, a couple of riders were passing the motor home, just like in my hometown of Murphys. We moved on to Eunice to see a show with new friends from Lake Charles. I’ll blog it tomorrow.
Posted by Mary Matzek at 5:59 AM