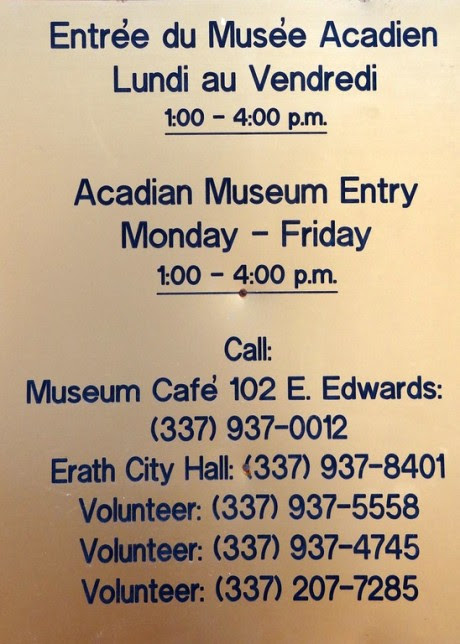 Yesterday, we drove to the small town of Erath, pronounced ee-rath, to visit their museum. A wonderful website intrigued us and off we went. We had an amusing introduction because the museum wasn’t open. We called all of the volunteers listed on a bronze plaque, obviously printed with high hopes, and only one was a working number with a message machine.  The City Hall claimed they had nothing to do with it. The cafe number was good, and an employee pointed to a paper-sign as the right number to call, and it, too, was disconnected. We kind of chomped at the bit and Jim called back to City Hall and asked to speak to the Mayor. The secretary there finally located someone to come and open the doors. I KNOW what it is like in a small town where the barber puts a “gone fishing” sign on his door, or the little museum run by volunteers has a sign, “Sorry, Gerta is sick today.” 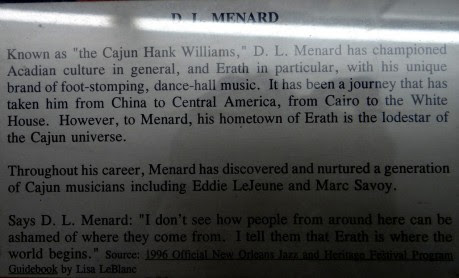 Erath is the home of D.L. Menard, the musician we had just seen in concert at Eunice (back a few blogs). 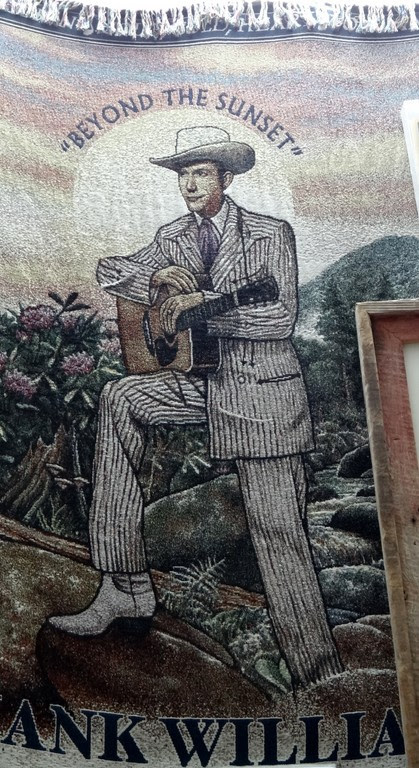 There were a lot of pictures of Menard and this tapestry of Hank Williams, obviously a very popular figure in the South Land. 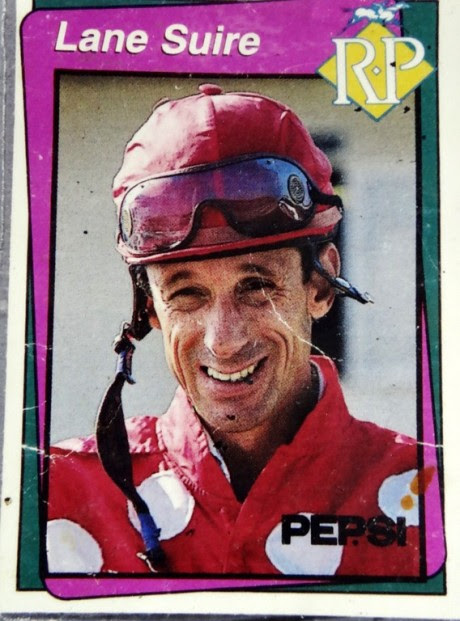 Other notable characters from Erath?  Several jockeys. I managed to get pictures of pictures of two of them. 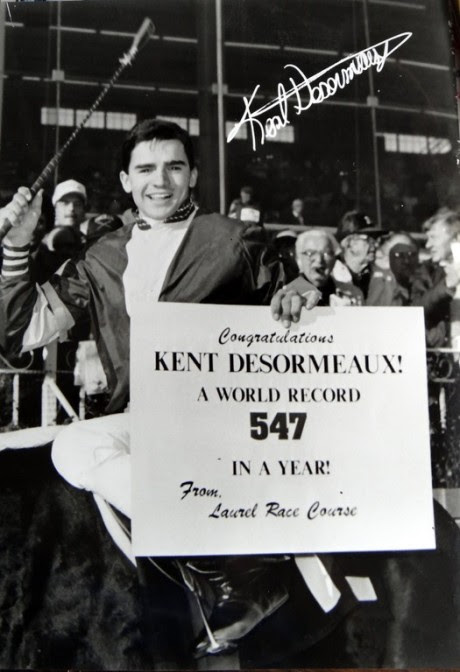 In fact, there are some really great things in this museum, but it is so poorly presented, one cannot hope to find it without help. Volunteers uneducated in acessioning and display can’t be faulted. Putting it kindly, it is a mess. They are funded by the University and someone should have helped them put it together. 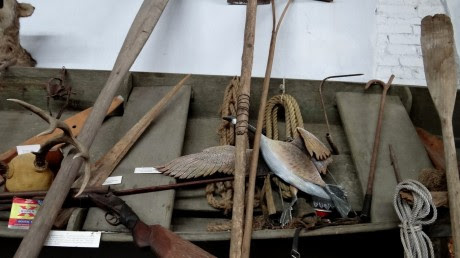 Artifacts are jumbled together. Hundreds of pictures, 3 X 5,’s are framed and you can’t possibly make sense of them or read what is written beneath them unless they are on a table or low on the walls. The walls are literally wallpapered with these photos. 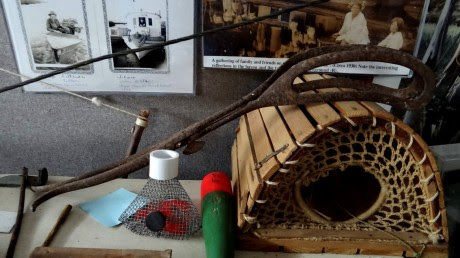 Artifacts cover other artifacts until confusion reigns. The best pictures should have been blown up. Small ones filed in a rolodex fashion for people to read through or not. Well, now that I’ve complained, I must get to the meat of why this museum is worth visiting, if you are in the area. 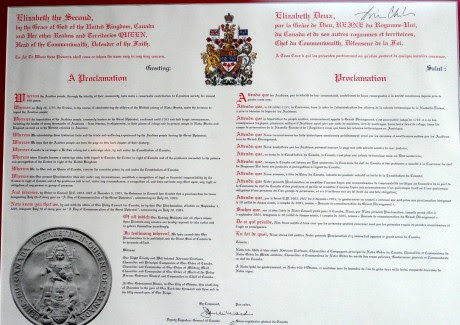 Warren A Perrin, a local attorney, made a petition to Queen Elizabeth to apologize to the Acadian People for running them off their land and forcing them to move from Canada. Many people died as a result.  To everyone’s surprise, the queen agreed. A copy of the proclamation in English and French is above. Double click it to view what is written.

The ceremony and deliverance of the proclamation was held in Nova Scotia, where the Acadians had settled. On the right is the Queen’s Representative, dressed in clothing similar in style to clothing Queen Elizabeth wears. A very proud moment for Perrin and his delegation and a very important document for the Acadian population of Southern Louisiana. 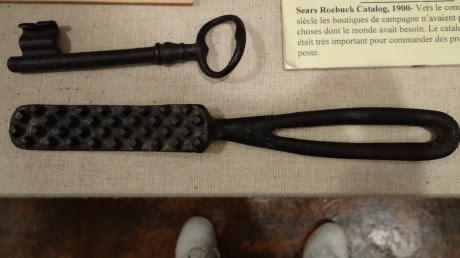 I always look for an item I’ve never seen before and I found it. But, it is unidentified, the black studded tool at the bottom of the picture. If anyone out there knows what it is, let me know. 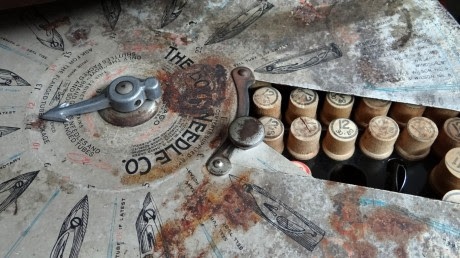 This case was for a storekeeper selling needles. The type of needle is described and pictured on the lid. The customer could then choose a small tube of needles with a wooden “thimble” cap. Something else I’d never seen before. 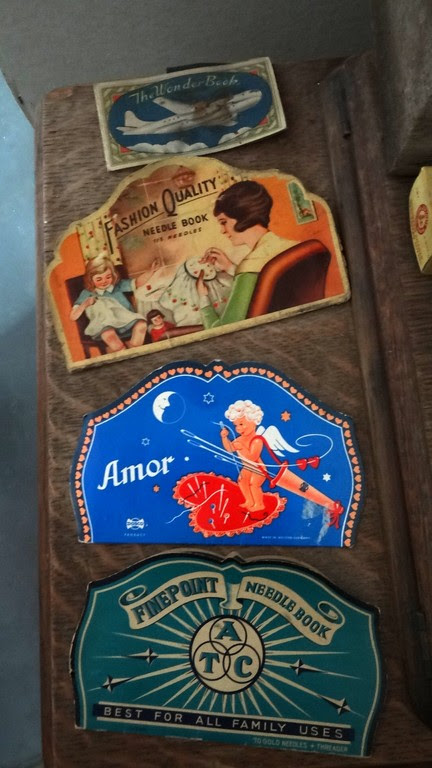 I remember buying needles in packages like this. Even those are a thing of the past. 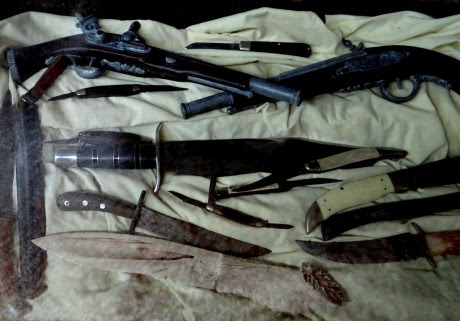 An interesting weapons case. Notice the skull on the pistol upper left corner. And the jawbone of an animal knife-front

This carving depicting the Acadians gathering together to leave their chosen homeland in Nova Scotia was given to the museum by Evangeline Parrish. 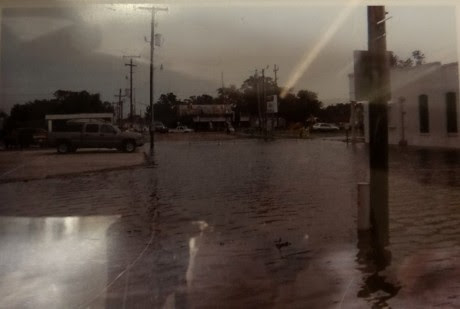 And as usual in this country, the ravages of hurricanes and flooding. The museum had to toss 3,000 artifacts damaged by Ike. 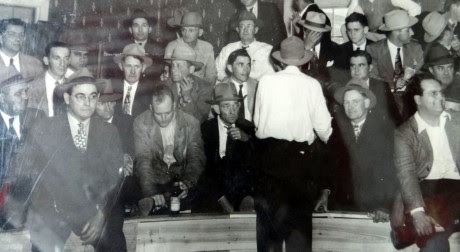 There is much to see here if you have a ladder and magnifying glass. Here is a picture of men betting on a cockfight. I love the hats. Almost every man wore a hat in those days. We headed home and watched the sunset. I watched it while riding my bike.
Posted by Mary Matzek at 6:18 AM

Have you ever considered about including a little bit more than just your articles?
I mean, what you say is fundamental and everything. However think of if you added some great graphics or videos to give your posts more, "pop"!

Your content is excellent but with images and video
clips, this blog could certainly be one of the very best in its field.
Awesome blog!

Have a look at my web page ... www.Youtube.com