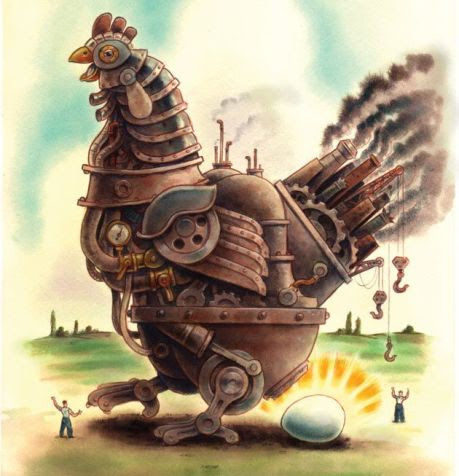 I stole this photo by Ross McDonald from Mother Jones Magazine.

And this quote from Josh Tetrick a vegan and founder of Hampton Foods Company:

United States’ eggs are produced by birds pumped full of corn, soy, and antibiotics in giant rows of cages. “Female birds are packed body to body in tiny cages so small they can’t flap their wings, They never see the sunlight. They never touch the soil.”

Tetrick has two engineers, six biochemists, and 11 food scientists  on a single-minded quest to hack the egg and its 22 functional properties.  The goal is to replace all factory farmed eggs in the US market. The team has looked at nearly 1,000 plant proteins.

These entrepreneurs are determined to realign plant proteins into tasting and feeling exactly like meat. After the egg, the chicken, pork, beef.

He asks, when you eat a muffin, do you know, or think about the fact you are contributing to the way animals on megafarms are treated? Since a third of US eggs are used in prepared foods, muffins, pasta, dressings, breads, mayonnaise, that is their first market goal. Then, egg-beaters style eggs that people will use in their omelets.

He attracted venture capital from Bill Gates ,Twitter founder and other rich guys because they tasted and believe in the product. They also believe that most Americans do not like the corporate megafarm way their food is raised. And if they can realign molecules in plant DNA to mimic animal DNA, it won’t taste like tofurkey, it will taste like the real thing. Getting it to mimic hard muscle is still difficult, but they are betting on it. There are many companies who have tried beyond eggs and beyond meat, some failed, but many are improving the quality of fake meat. China is highly invested in creating vegetarian meat. It is only a matter of time.  In 2014, whole foods will begin selling meatless chicken strips. It is 55% more economical to produce vegetarian meat than the megafarm way.

Not everyone will give up muscle meat. It is a choice. But, vegans and carnivores can shake hands on some things and share the progress toward a better planet.

Now,  if I can find the company on the Stock exchange? I’m ready.
Posted by Mary Matzek at 7:03 AM