FUNERALS ARE FULL OF LIFE.

I've heard people say, "I hate funerals," I've said it myself. We don't like to face the sadness of a life ending. 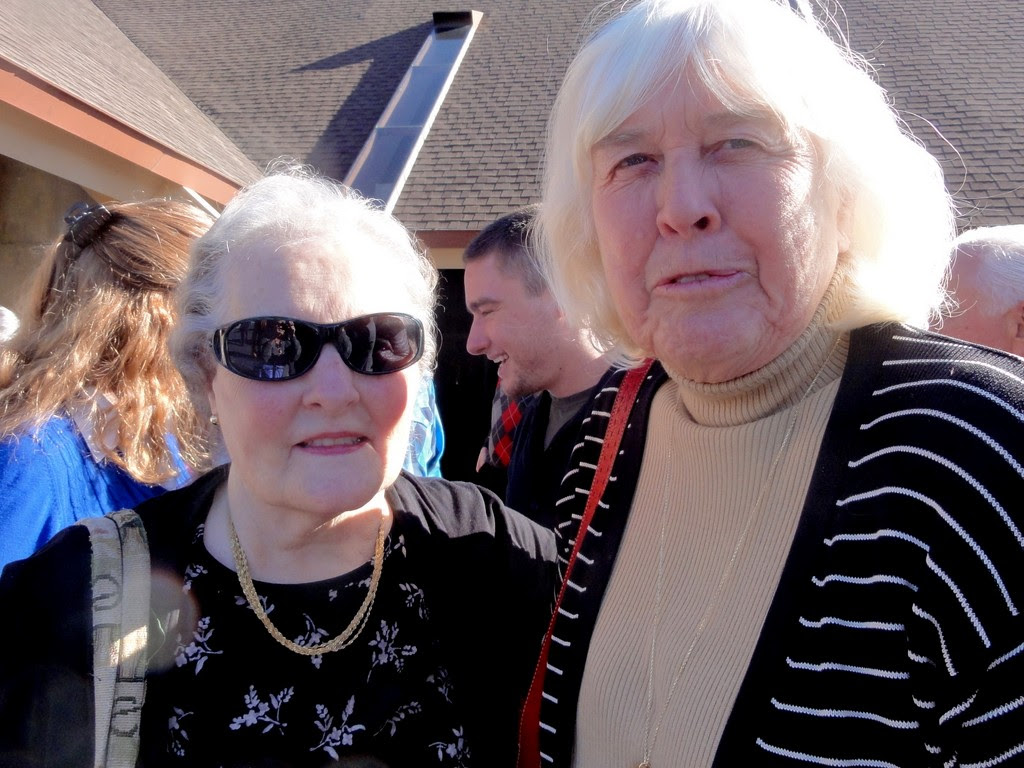 Eleanor Darby, (left) lost her best friend and husband Dan,  November 9th, and, a good friend Betty Fitzgerald, November 7th. Eleanor is as beautiful inside as she is on the outside. I took this picture as she stood outside the church yesterday, with her niece, Pam. She and Dan were married 56 years, they lived in Angels Camp their entire lives;  they were married in St. Patricks Catholic Church where the funeral mass was performed. Those necessary rites and rituals have meaning for all of us.
I can identify with the feelings losing a spouse can bring. I lost my husband of 40 years in 2000 and was numb for a year. I couldn't recall later what I had done for Thanksgiving, or Christmas. I couldn't remember some people who attended his service or much of what went on, though I seemed to be in control. With distance, we recognize that death is a part of life. An ending, but much more.
This morning and yesterday, I thought much about Eleanor and Dan, their boys, Mike and Robbie, who shared such wonderful and humorous remembrances of their Dad, from learning to say I Love You, his  dreams, and careers, and his famous chili beans that were cooked for the reception.  Dan's brothers that I knew, Earl and Elda, Jack and Ida, Lloyd and Ruth.  (Eleanor and Elda are sisters who married brothers.) His nephew Rod and Kristi, his grandniece, Nicole and Larry. Friends, Don and Betty Fitzgerald, and so many more from every walk of life.

Relationships have so many patterns and pathways. I met his grandniece, Nicole, first, when she was about three years old and in the same dance class as my daughter, Virginia. We both lived in Fremont at the time, It was 1972 or 3. Her mother Kristi Darby divulged to me that our planned retirement in Murphys was very near where she had liived in Vallecito. Her mother had been the Postmaster there and she and Rod had a house they rented there. Not long after we built our house in Murphys, she ended up my next door neighbor,  two parcels over. 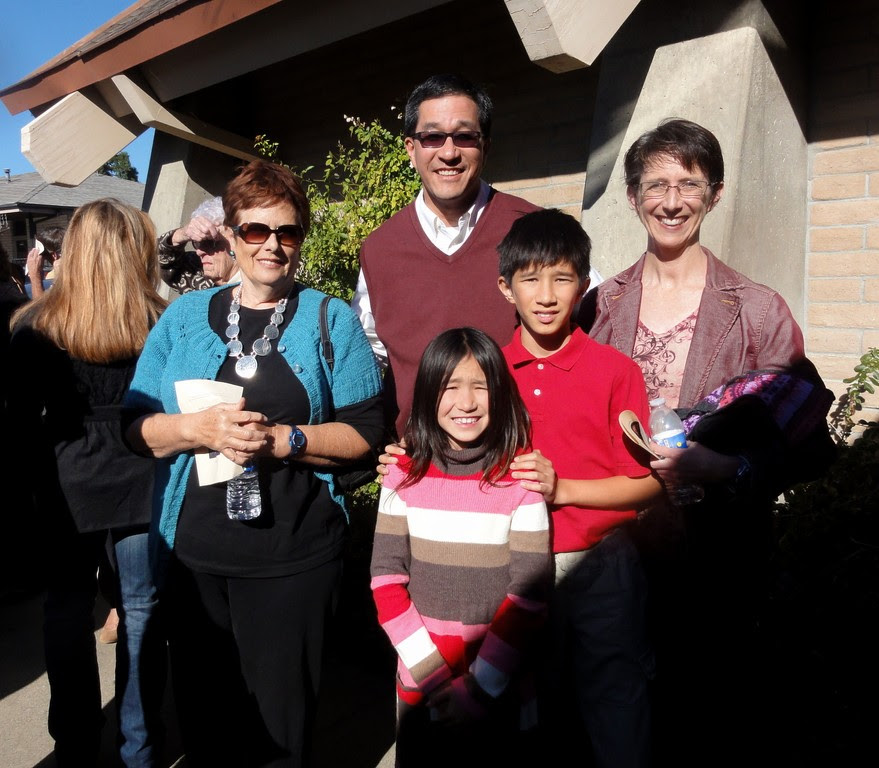 Kristi with son-in-law, Larry, daughter Nicole, grandchildren, Shannon and Garrett. Nicole and Virginia then attended High School together. At the reception, we got to catch up on each other's lives.
I met Eleanor and Dan, and Betty and Don Fitgerald through the high school sports programs, and Quarterback Club. Their kids attended High School with ours.

Dan's father, "Chub" Darby, was a Murphys fixture, and all around character in his nineties, when we met. He participated in the Homecoming Parades, and his cabins are now part of a vacation rental. Darbys hale from gold rush days, two roads are named after them. I remember Chub whenever I cook his watercress potato salad. If I buy the cress in the store it never tastes as good as picking it in a local creek.

Our friendship was strengthened when all of us became a part of AFS, American Field Service, A student exchange program, along with Dutton  and Ben Smith, Carol and Clark Burton...Walli...so many memories and faces, if dis-remembered names.

Nicole went on an exchange to Austrailia. Virginia went to France. Eleanor and Betty took in multiple exchange students over the years.  Betty ran the program with the help of many others, as Kristi and I did in later years. 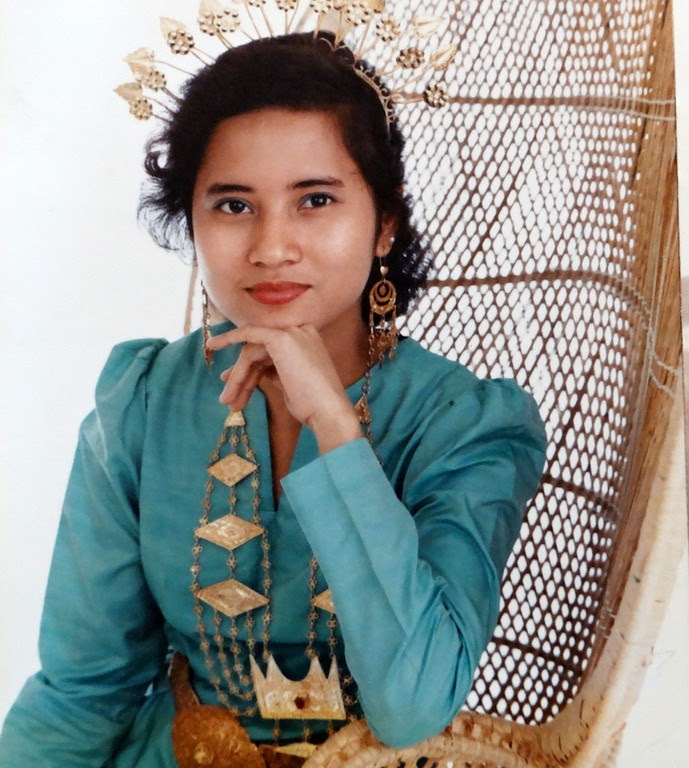 Linda Djamaludin from Indonesia was our exchange student in 1986-7. They always say you get more from the program than you give, and it is so true. The support at AFS meetings was wonderful. Our girls went in different years.  At each meeting we would read Virginia's and Nicole's letters from their temporarily adopted country.

Eleanor, and Kristi, and I, with all the county exchange students, loaded into our Motor Home and traveled to Pasadena for a special opportunity to work on the floats for the Rose Bowl Parade.  We did it two years in a row with kids representing probably twelve different countries.

Eleanor and Dan visited students they had hosted in Italy, France, Switzerland and Sweden. They are really life changing events.

At the reception, we didn't talk about death and loss. We were witnessing the continuation of life around us. Children, grandchildren, aunts and uncles, nieces and nephews with the DNA and blood of their special inheritance of life everlasting.
And, then there is always Dan's beans, Chub's salad...Mike's paintings...
Posted by Mary Matzek at 11:54 AM