THE WHITE DOVE OF THE DESERT 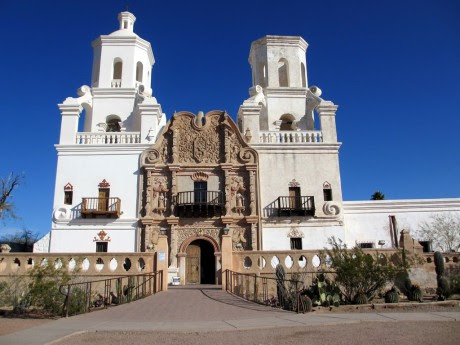 A National Historic Monument, San Xaviar Mission was founded by Spanish Padre Kino in 1692.   The current church replaced it  in 1783, making it the oldest European style structure in Arizona.  It is situated on the O’oddham Indian Reservation.  It suffered earthquake damage in 1887 and the restoration process was the most fascinating aspect of the Mission to me. 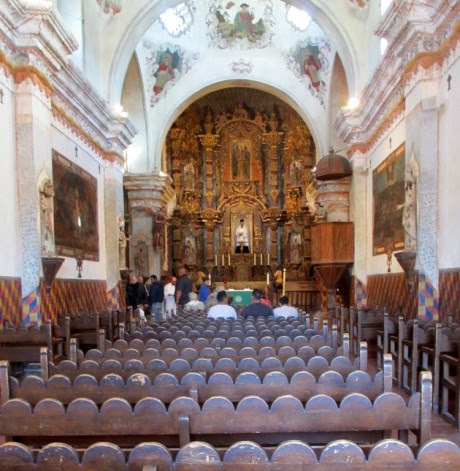 It’s long and narrow and colorful. Now, with electric lights, you can better appreciate the work.  Originally, it  was lit with hundreds of candles and what little light came from four small windows in the center arch of the church. The roof  is divided into four arches with two arched knaves to either side of the altar knave, making the building into the shape of a cross. 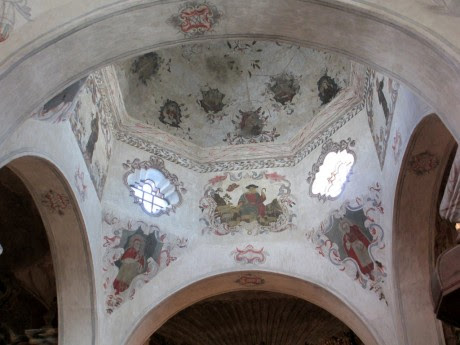 The windows are beautiful and allow one to see the frescoes during daylight. 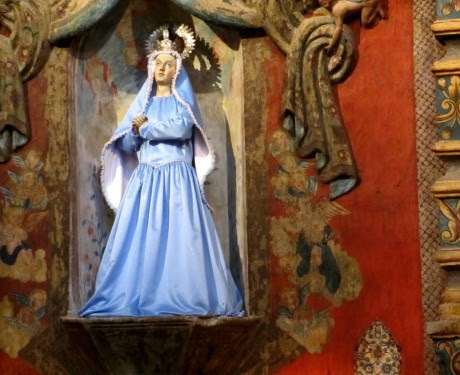 There is said to be 50  human figures in the church. This statue of the Virgin Mary appears to be wearing cloth, but all is made of stone as are the drab curtains behind her. 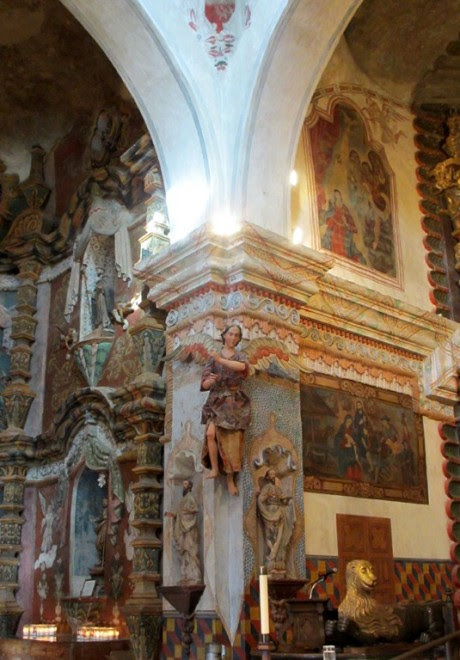 No one knows who designed and painted the original church, but studies of Catholic iconography show that everything in it had a particular place and meaning. 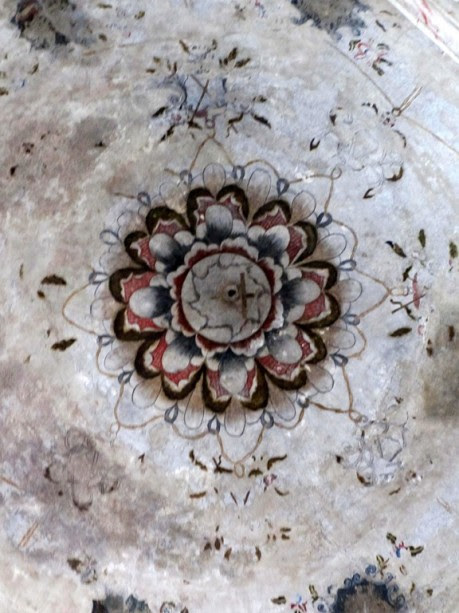 The beautiful arched ceiling frescoes, the figures, paintings and altar decorations, inspire awe, but more so the restoration after the earthquake. 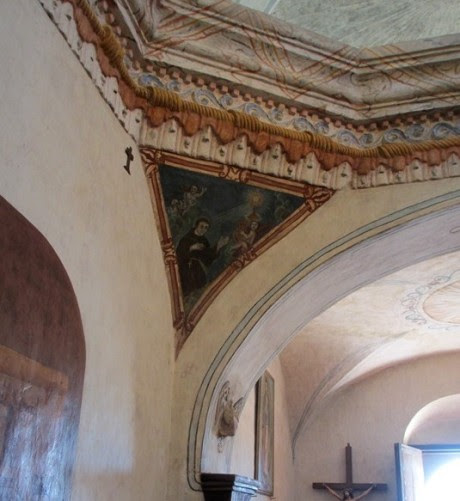 At the four corners of every arch is a painting. And running through out the church is the knotted rope of the Franciscan Robes visible above the painting. The original work was most likely done by a Spanish artist, but the restoration was done and paid for by the O’oddham Indians the church serves. With donations and grants, they  hired experts from Italy to teach them how to do restoration work, a skill they now pass on to a new generation enabling the church to be cared for forever, one hopes. 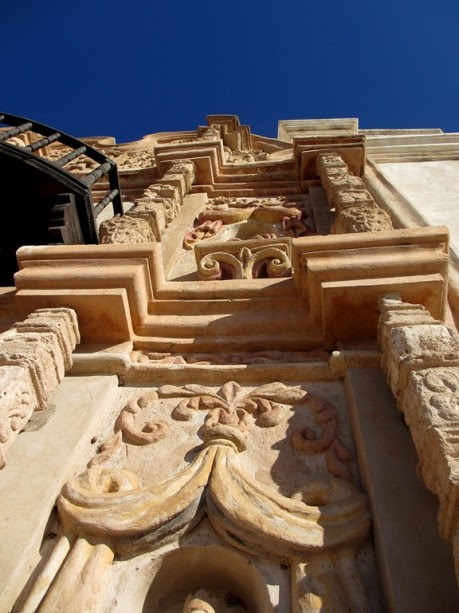 The outside facade of the building was severely damaged by the earthquake and a lightning strike took off the top of the  North tower in 1939.  Several restoration efforts failed. In 1953, they rebuilt crumbling areas of handmade brick covered with plaster just like the original.   Then they patched cracks and covered everything with a cement wash. The cement wash was a mistake. The  cement wash prevented the building from breathing and kept the inside damp, further damaging the art work on the inside. Analysis of the materials and the advice of Italian experts who learned from experience, they tried a new wash from materials at hand.  The new wash made from lime and sand and cactus was successful. It kept the building from leaking and allowed the thick walls to breathe and dry out properly. 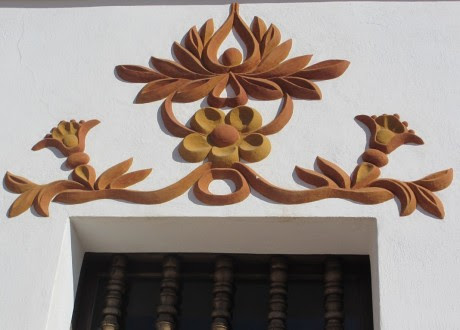 The facade was restored in 1953. The painstaking inside restoration was begun in 1992 and completed over a period of five years. If you’ve ever seen a wall with flaking paint, you can imagine what it was like. Using hypodermic needles, they injected liquid with a thin epoxy into each flake to get it to re-adhere to the painting. Once stabilized, the spots where no paint remains are sponged or brushed on to blend with the original painting. A video in the museum allows you to see the process and meet the locals who were sent to Italy to learn restoration. 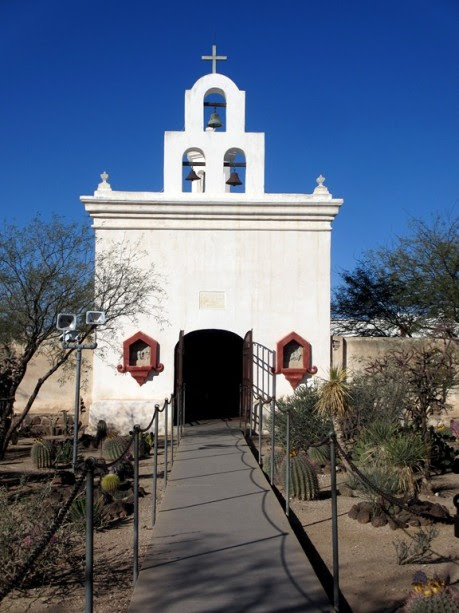 There is much to see here. An adjacent mortuary once used to hold bodies awaiting burial. A school sits behind it.  A hill on the north side of the church has a sanctuary  built into the rocks resembling Our Lady of  Lourdes. 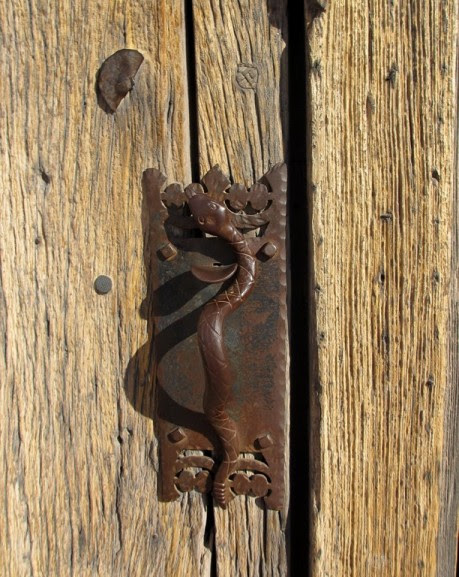 About the place interesting touches of old. A door latch. 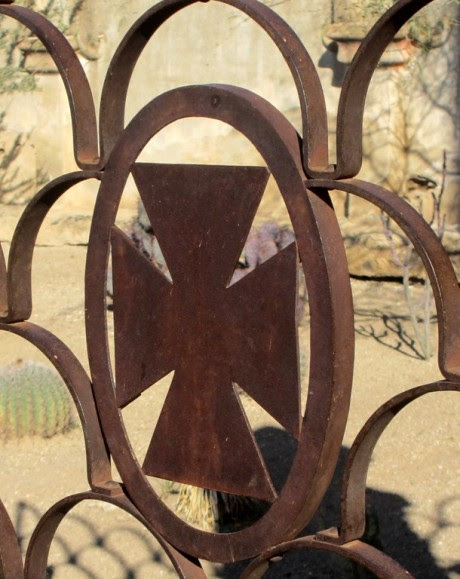 A cross of iron in a gate. 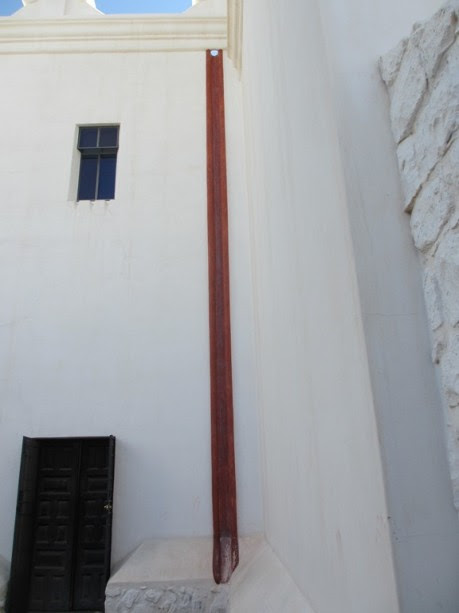 The unique way water is drained from a flat roof. Ignacio Franko explained the significance of this gate design to O’oddham  culture, where a man walks and reaches hard turns in the road but always circles back to the good of life. He is the leader of the band, White Dove Mumsiga. 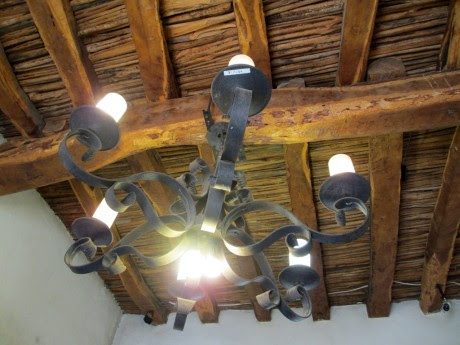 In the museum, one can see the old saguaro rib and wattle building methods of old. 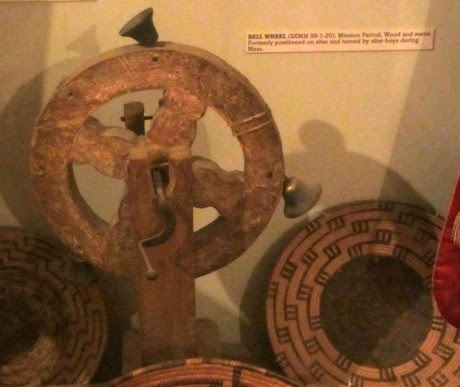 This bell wheel  turned by the altar boys, old vestments, baskets and everyday artifacts along with  a huge Spanish tome with colorful lettering are on display. 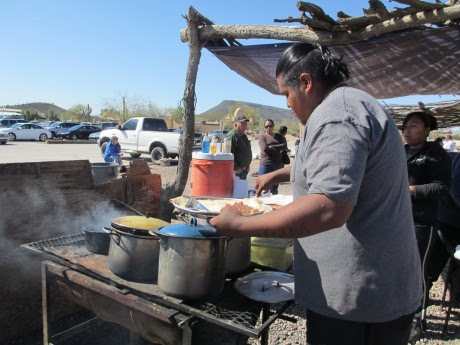 We visited on a Saturday when multiple baptisms were being performed. People were enjoying this wonderful ritual and it was fun to watch them enjoy this time. Vendors were waiting for the crowds to leave the church. They were selling green and red chili burritos, Indian fry bread with cinnamon and sugar, and beans and chili. Great smells and a great tasting burrito.

We climbed the hill for a last look at the White Dove of the Desert.
Posted by Mary Matzek at 6:44 AM