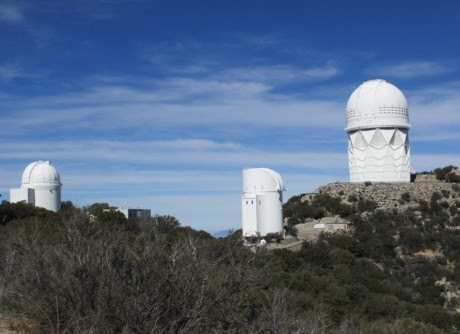 When we decided to visit the Kitt Peak Observatory, I thought we would see three telescopes, since there are three tours. This sacred Tohono O’odham Indian land holds 25 telescopes with varying functions. The largest telescope, the Mayall 4 metre is on the right is one of the available tours. New telescopes in Chili and elsewhere have 8 metre mirrors. Technology continues to advance in the making of the mirrors. 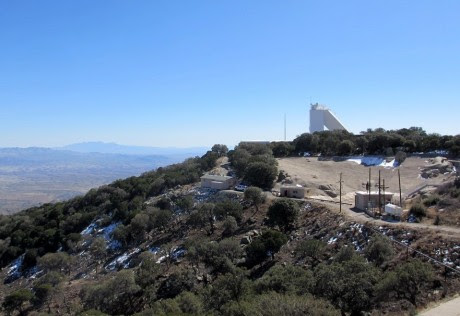 The unusual shaped ediface at the top of the photo is the McMath-Pierce telescope that only studies the sun. It is also on the tour.  The Indian Tribal lands on  top of this mountain are ideal for viewing stars; it is quiet, great clear nights, good weather, and close to services, but even better, the area around this mountain is unlikely to be developed. When the tribe was approached to have a telescope built on their land, they declined. The O’odham have lived thousands of years on this land and know the night skies, someone figured. After a look through a telescope they changed their decision to a yes. 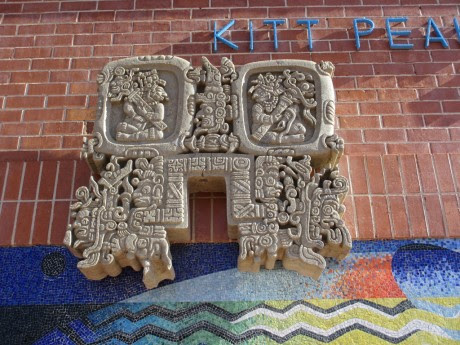 A great mosaic on the front of the visitor’s center makes the connection between the Maya and the O’odham, both ancient cultures with great spiritual respect for the stars above them.  The O’odham were smart and will not allow commercialism on their land, no trashy fast food vendors to spoil what is natural, not even an ugly blue garbage can. 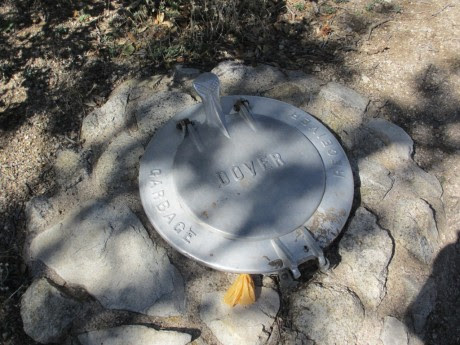 No camping is  allowed here.  They expect to be the  first to be hired where qualified. Since the idea for this observatory was organized by an association of astronomers, with little funding, the government got involved. The astronomy done  in many of these telescopes is free to the world. Go to a website and you can see real-time images of what is happening in the heavens and see surreal pictures taken through the telescopes. 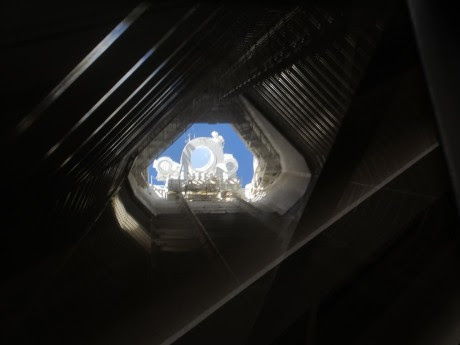 Inside of McMath-Pierce, the light enters from the top of the structure and strikes the aluminum coating of three mirrors that bounce and coalesce into a  single image onto an instrument table. Realize that everything in the universe is moving. Thus the image on the table would move. So, the table is mounted atop giant tubes that move in concert with the sun. This is still the largest solar telescope of its kind in the world. 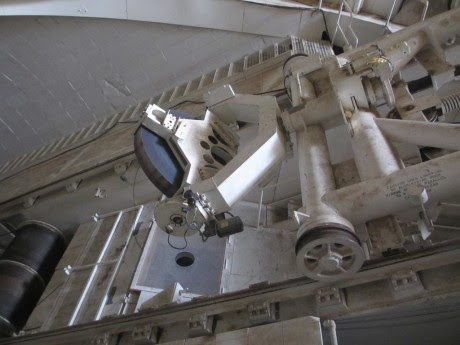 This mirror on wheels is actually a set of three mirrors on wheels mid-way into this 300 foot tunnel. It is difficult to take pictures in this tunnel, but if you have a retired electrical engineer by the name of Jerry, (last name unknown) as your volunteer docent, your tour will be magnificent, humorous and educational. Our second tour was of the Mayall 4 metre telescope. All telescopes here are set at a 32* angle to be aligned properly with the stars. From this telescope we had sweeping views of the grounds and all the other telescopes  on the mountain. It was exhilarating. This telescope can move and see virtually any angle in the sky. 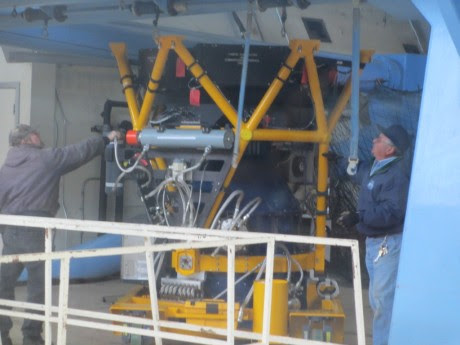 Unusual on this day, workers were moving a piece of a telescope from Chili into the equipment cage.  The windows were open and we got a terrific view of the process. I was stunned to learn that this huge telescope, the stairs that lead up to it, and all, are not touching the floor. The weight is held by a structure buried into the granite. The building can shake. It is not connected to the telescope, it is a separate structure that envelopes  the scope. 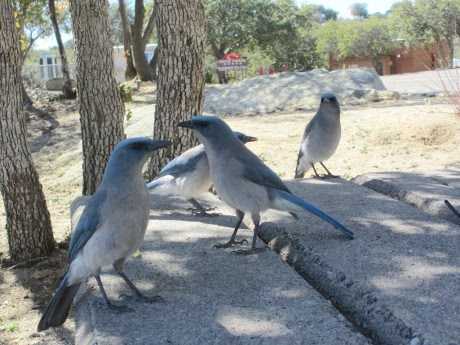 We had our lunch with the blue jays. 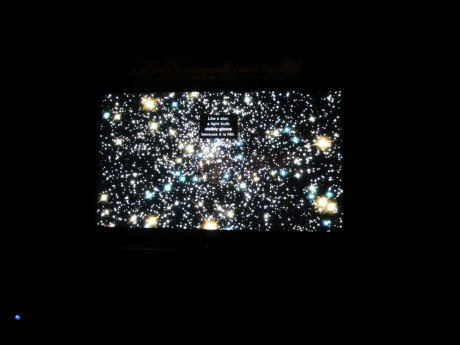 We watched about an hour of videos with marvelous pictures of the night sky. I learned about the Arizona University Mirror Lab, where 52,000 pounds of glass is melted into a mirror and takes 3 months to cool before being polished for use in a telescope. One mirror on this site is made from quartz. I’m not very good at technical stuff, but this observatory was a fascinating science. Please go. Take your kids. I never plan to visit a place twice, but I could easily return and do these tours all over again.
Posted by Mary Matzek at 6:39 AM