ON THE WAY TO SLAB CITY. 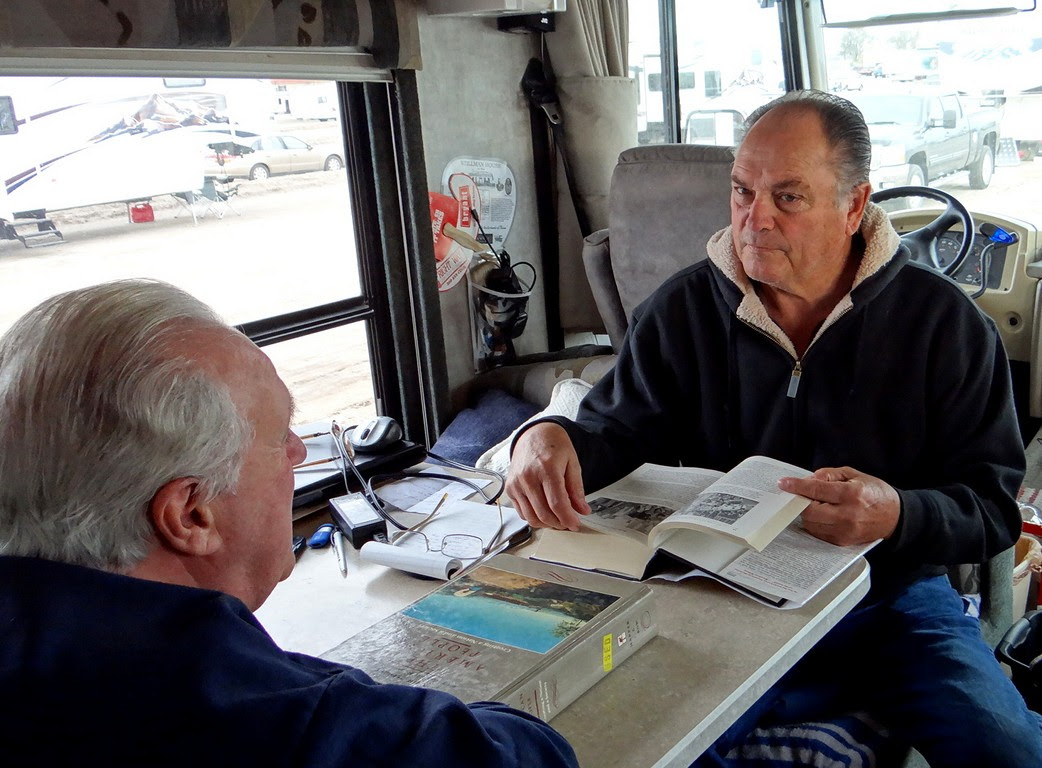 Our friend, Randy Vining was parked, along with us, at the Quechan Casino parking lot. I love his blog, that often includes his friends Wayne and Glen. I finally got to meet them. Glenn is a full timer at 44 years old, and produces music with his computer for Hollywood TV movies. Wayne writes a spiritual blog. These guys engaged in some serious philosophical discussions while here. We didn't see much of Randy, but he came to wish us farewell. 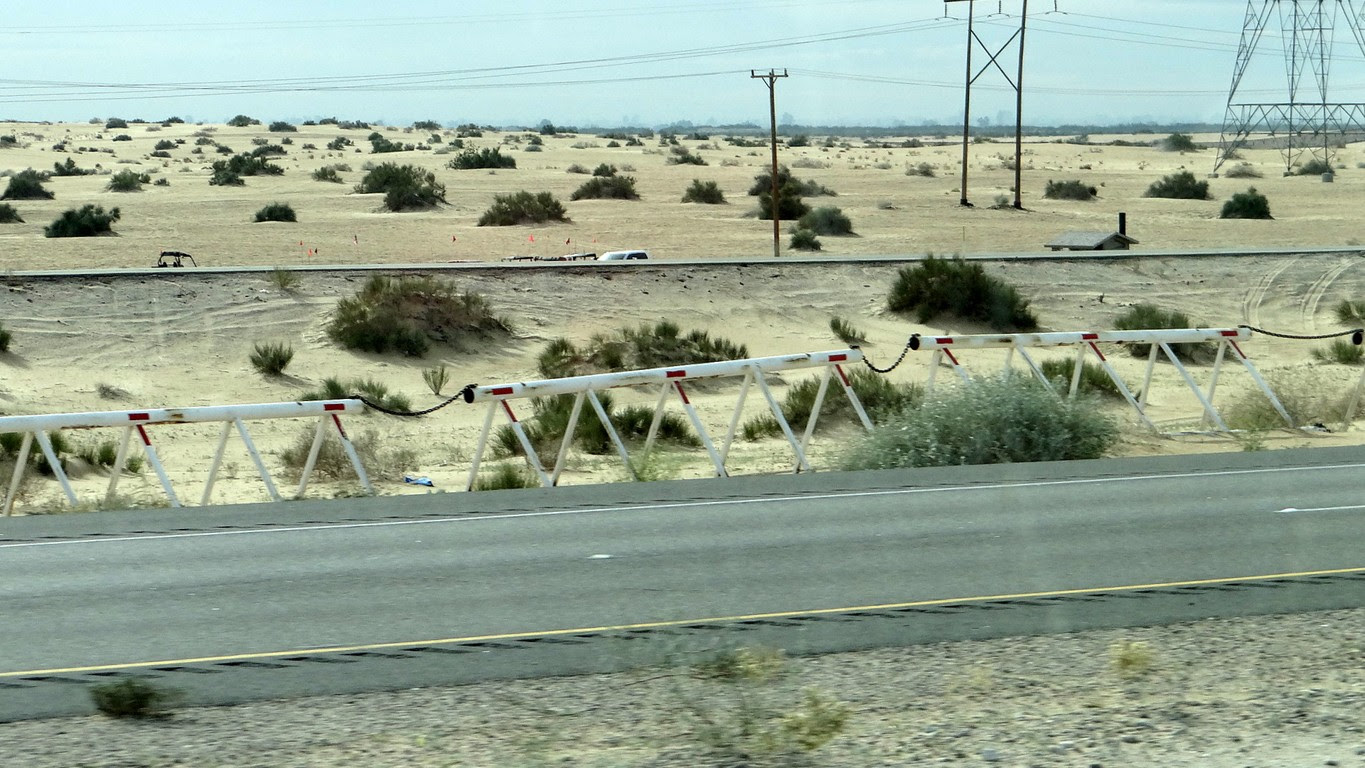 Headed for the Slabs, which I hadn't visited since 2008 or 9, we crossed a long stretch of desert. New, on the roadside, what looked like saw horses tied together, are barriers to protect ATV riders from accidentally jumping up onto the roadside and injuring themselves. 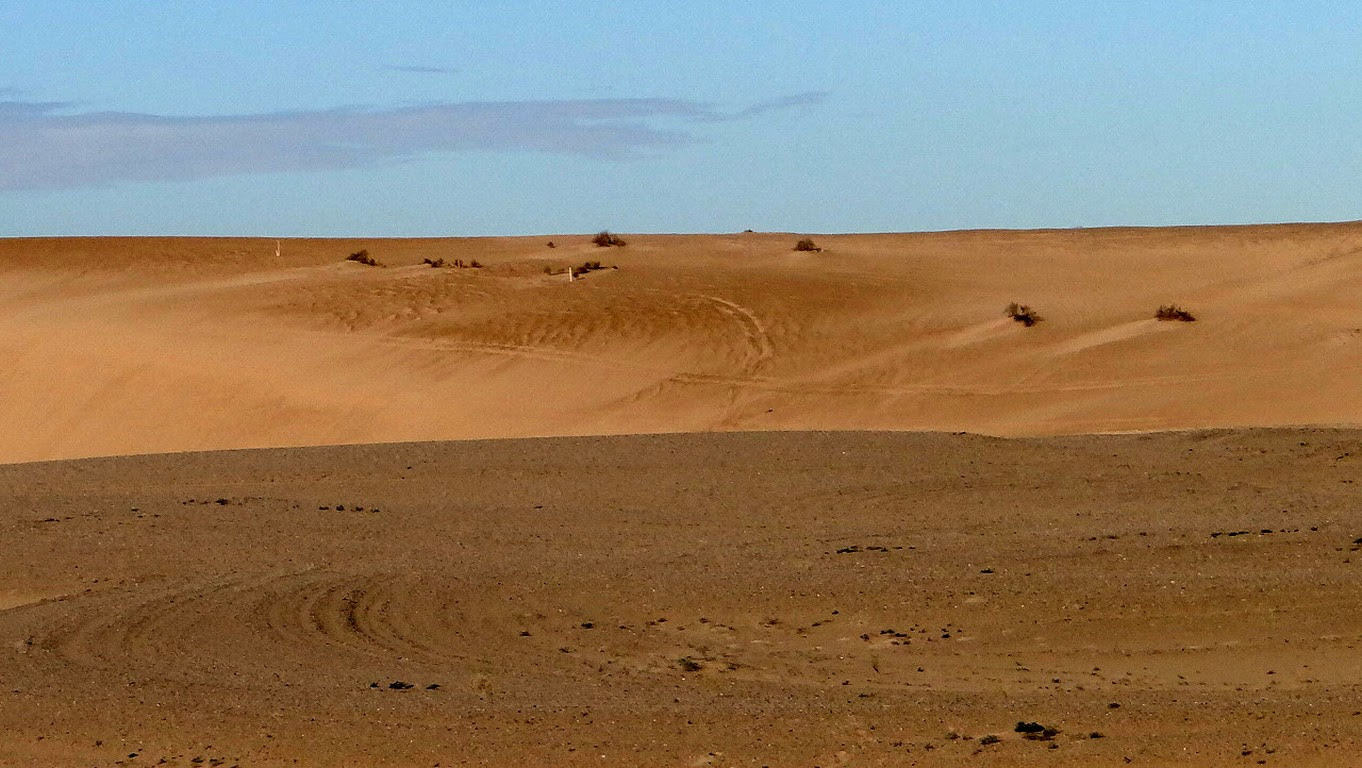 Pretty dunes mark our route on highway 8 West, and then later highway 115 West. We passed through the biggest town around here, Brawley, and then the smaller town of Calapatria, population about 7,000 if you include the 4,000 inmates in their prison. 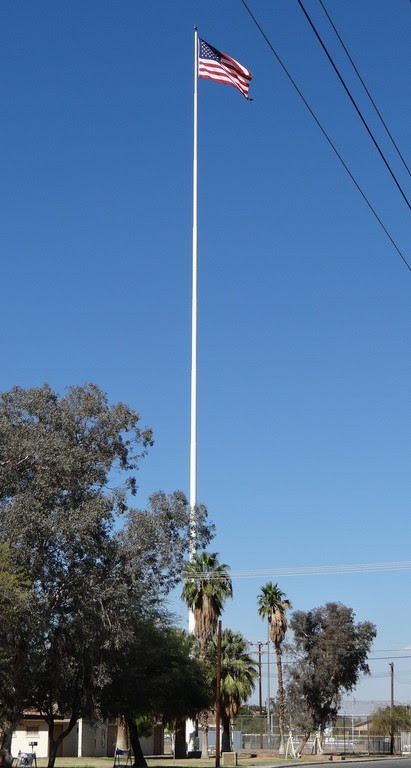 Calapatria has a flagpole 184 feet tall. Their claim to fame, so to speak. The city is 180 feet  below sea level, so their flag will always fly above sea level. We tend to think of them being out in the middle of nowhere. But, high school girls were happily chatting about boys and school and seem very content with their place. Who are we to judge? 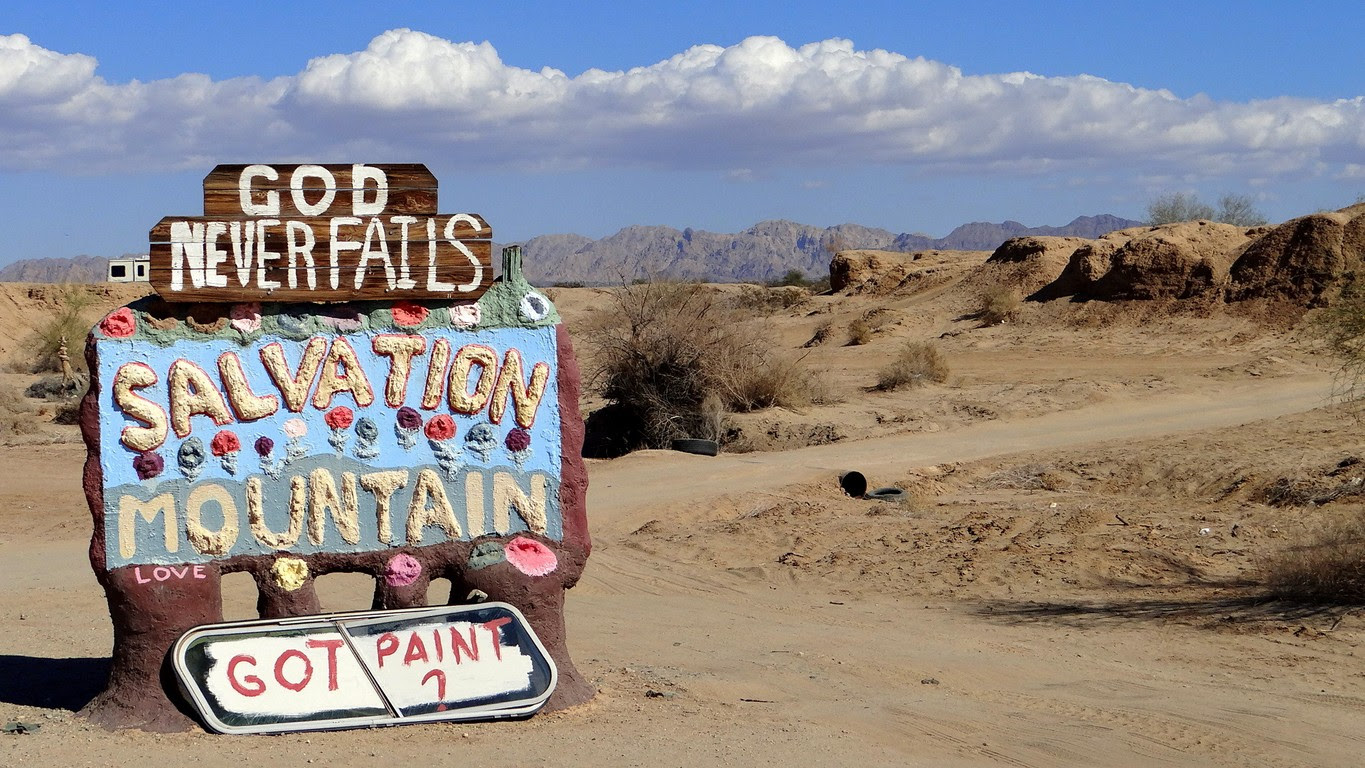 Just before you get to the slabs, or Slab City, is the famous Salvation Mountain built by Leonard Knight, who if I'm not mistaken, can no longer attend his mountain. The place is famous all over the world. Movies, books and television programs have been made about his place, but Leonard never changes. He was bullied in school and didn't get much education. His car broke down at this spot and he considered it a message from God and began building his message of love of God. Interesting guy. Couldn't find my pictures of him. 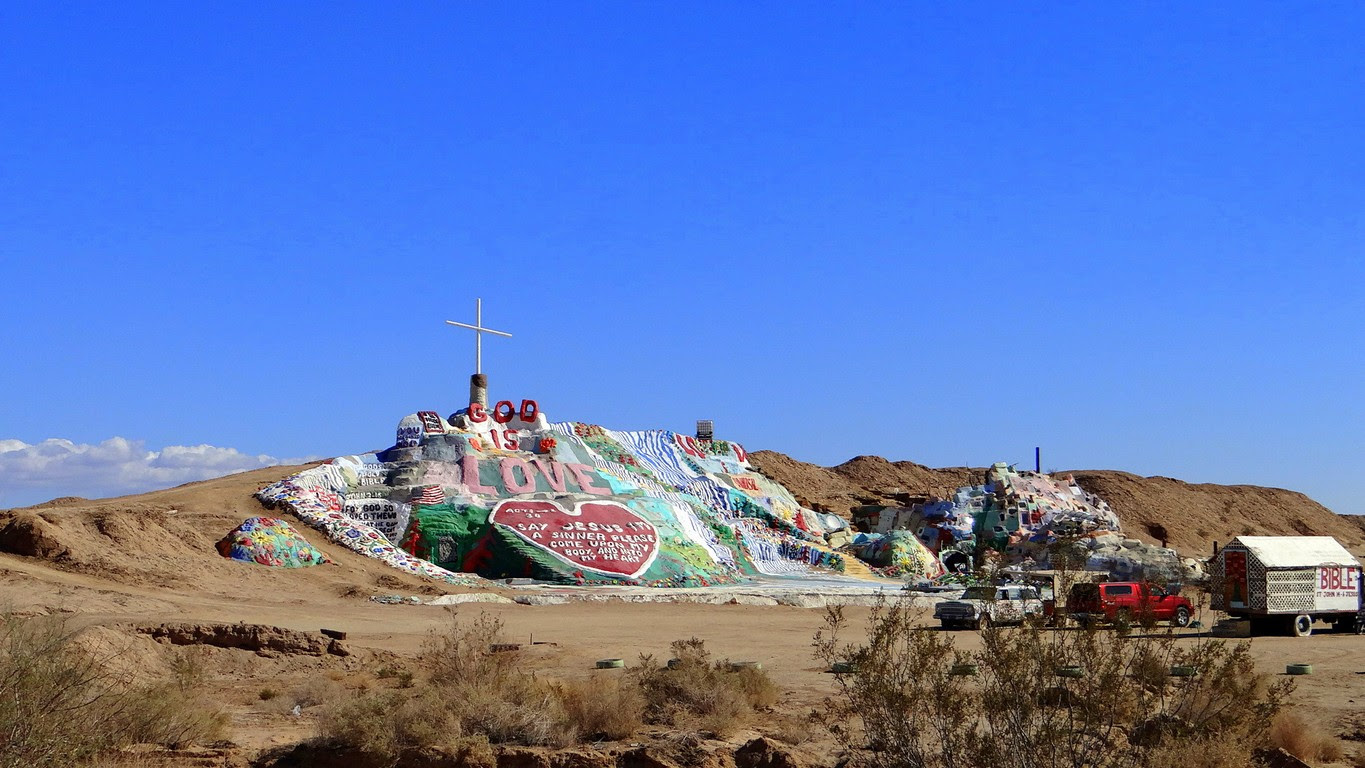 The last time we visited, Leonard was having trouble with vandals stealing his meager funds from him. He was sleeping, then, in one of his vehicles. He built a warren for himself since then. 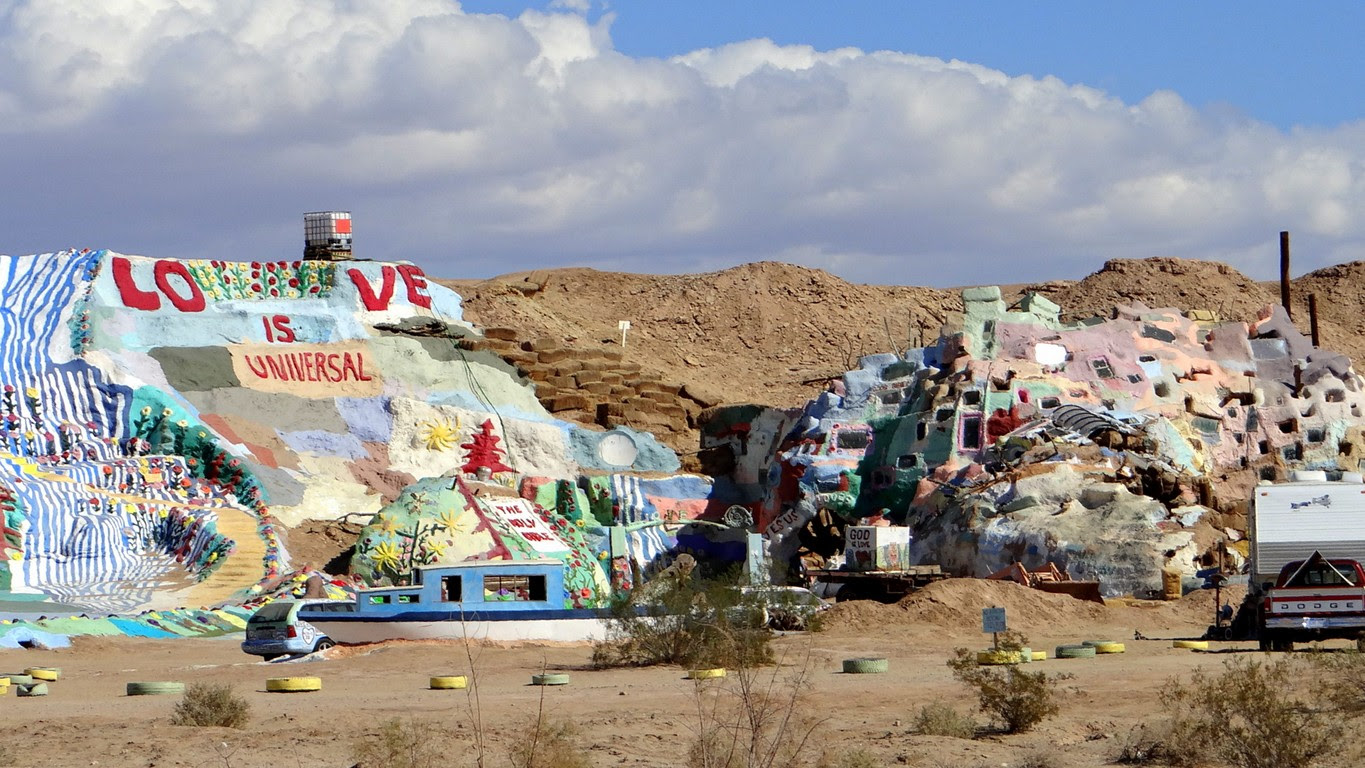 He would paint over the same areas, over and over again because the desert sun fades the paint. The mountain can be walked on and is solid. The construction to the right was in the beginning phase on our last visit. Love IS universal, he has that right. He is a kind and gentle soul. The place was done with donated paint, much of it lead paint. 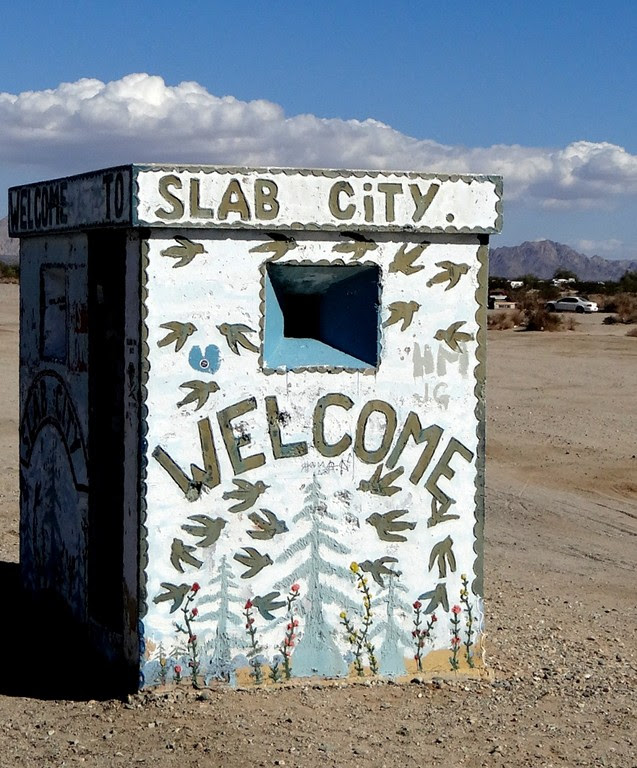 And, then, Slab City. This is an old military guard station at the entrance to the city, since it was once a military base. I was trying to explain Slab City to my brother on the phone. He has never been, nor heard about it. He is in a rest home because one of the side affects of open heart surgery is blindness. His vision is impaired; he can't read or even see television clearly. He is suffering from gout and can't go home. Misery city for him, but I can read to him about Slab City on the phone later today. 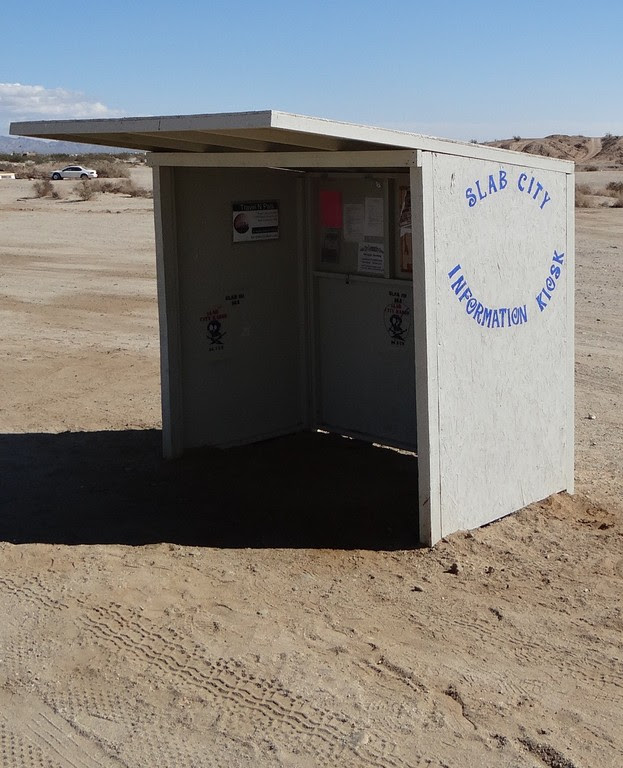 The information kiosk is nearby. Randy loves the slabs, and speculates, "Can a random group of people organize themselves into a form of government?"  The answer is yes. They have rules, they live together and work together but do not trammel on another person's rights. An interesting experiment. Randy has found, in his travels, other places that work that way, none quite as big as the slabs. 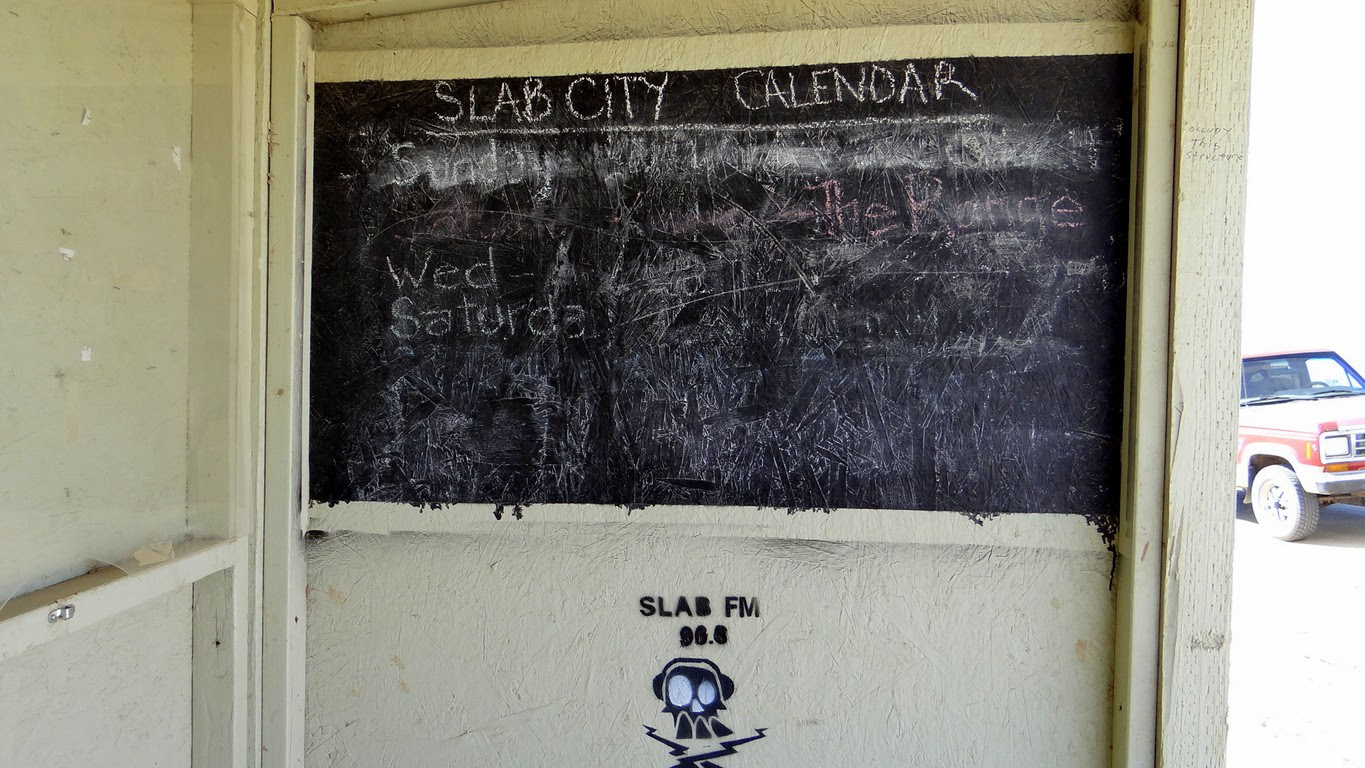 The kiosk has a message board, and gives you the identification for their radio station. 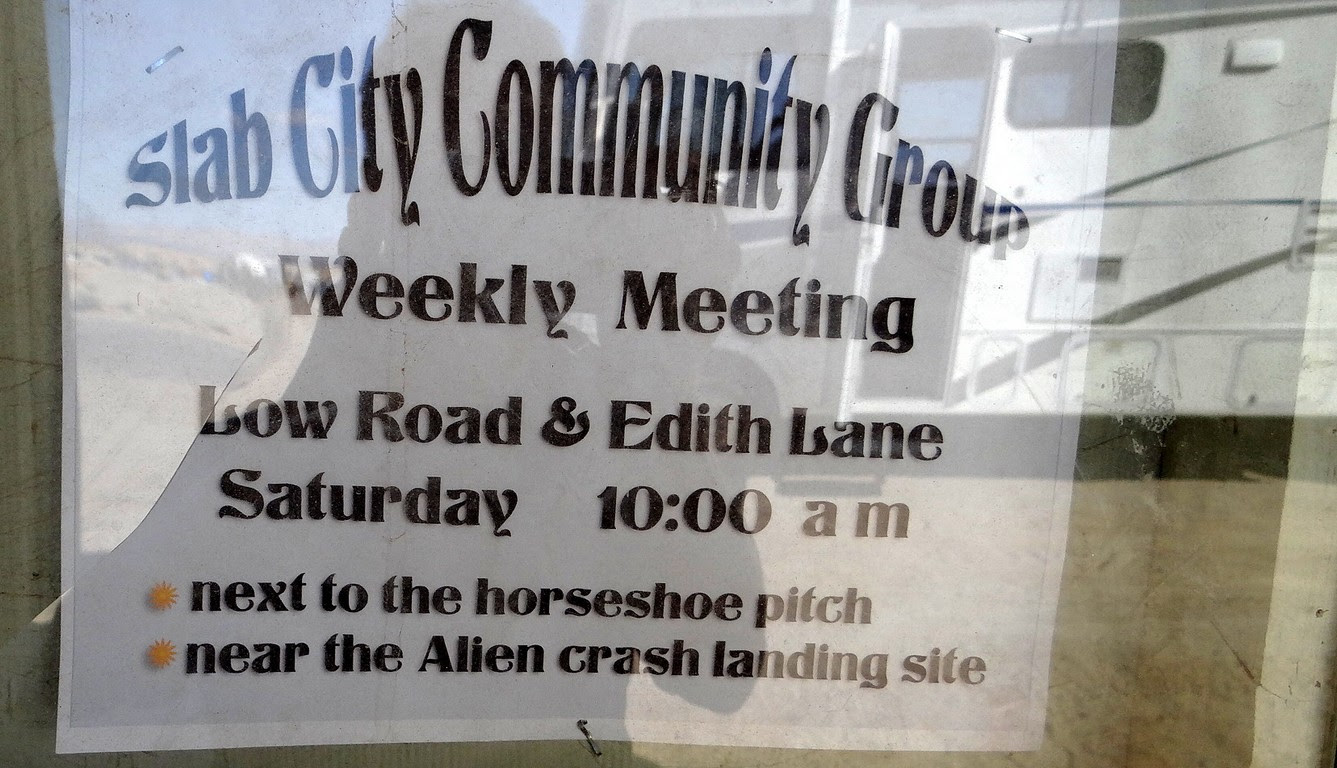 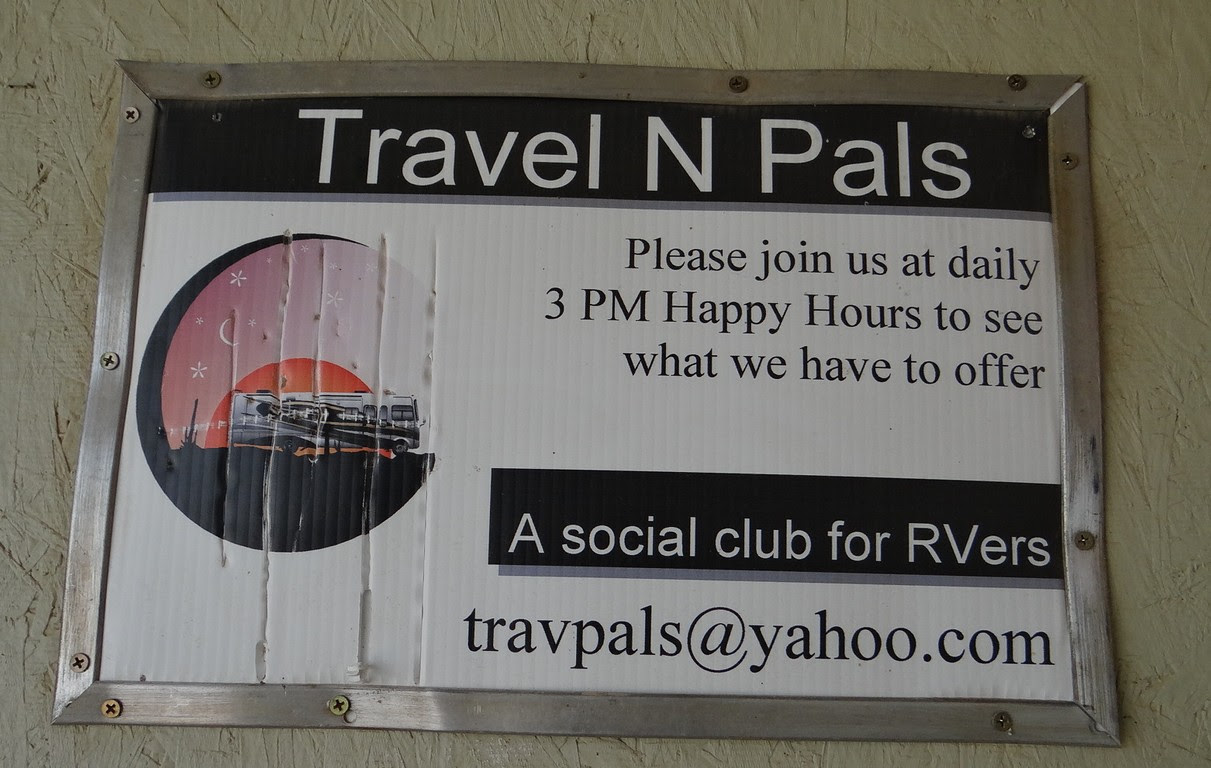 Travel N Pals have a sign. I wanted to buy a newspaper, now called a newsletter. It was once a one-pager for ten cents. Linda, the editor wasn't home, but I bought one from her neighbor, Sandi Andrews. A three-pager for $3. Maps, the zip code, where services are located, events at the slabs, dates and times, and the hot news, a guy bit by a rattle snake made it. A well done little paper. 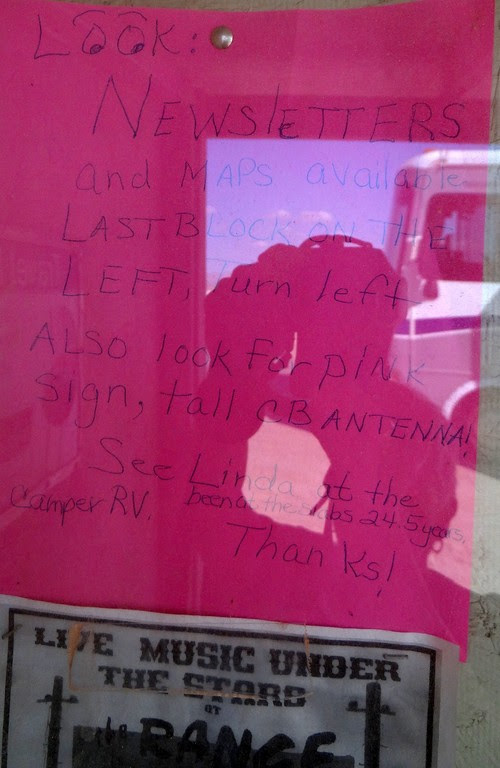 You can hardly read this message from Linda, but live music under the stars at the Range, which is what you might call a night-club.  No music on Mondays, but the stars last night, with no light pollution?  Magnificent diamonds envelope you,  an experience you only get in places like this. Gorgeous.
We were supposed to meet Jim's friend, Leo Perth, but he was MIA. Jim called his cell and his home in Oregon and did not get an answer. Hopefully we will find out he is okay. More on the slabs tomorrow.
Posted by Mary Matzek at 7:43 AM