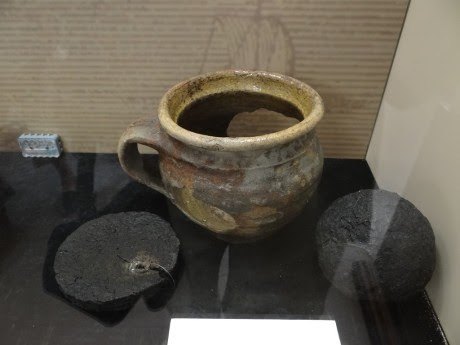 I love small local museums because they are bound to have something you’ve never seen nor will ever see again. Aha!  This broken clay pot is a weapon. The shrapnel balls were put in a similar pot with boiling oil and set on fire.  When tossed aboard an offending boat, the sailors would try to put the fire out, the oil would spread fire everywhere and the cold water would hit the shrapnel ball, explode it and kill anyone near it. Amazing. 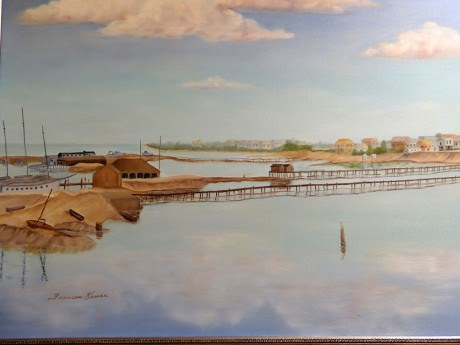 This painting by Frances Kruse shows how the local natives lived before the white man forced them inland. 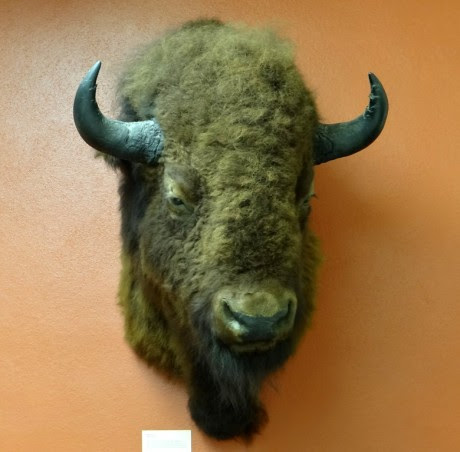 This buffalo head is as close as I want to be to one of the handsome beasts. A folk story here tells of a soldier wounding a buffalo. The Padre with him got its attention so the soldier could reload his musket. The chase was on. The buffalo trampled the Padre and walked off. Both lived through the encounter. 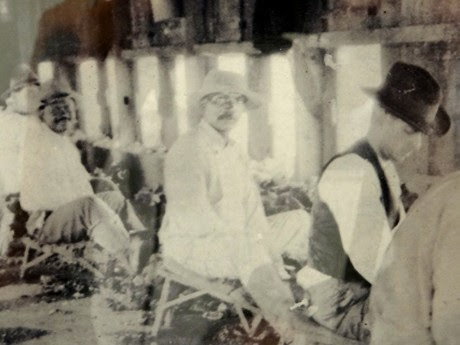 Oyster shellers worked near a window so they could throw the shells outside into the water. They eventually figured out how to use oyster shells to make roads. 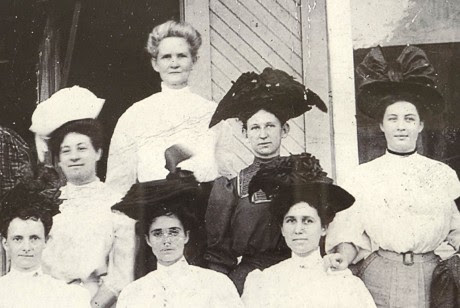 These outrageous hats were obviously the cat’s meow, but I found them pretty funny. It’s hard to imagine wearing one of these toppers . 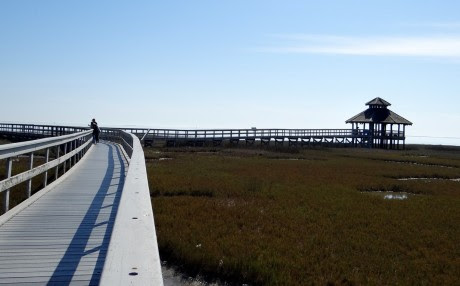 From the museum, we went to the Port Lavaca Bird Sanctuary. Another walkway around a marsh. The birds avoided being close to the walk way. The marsh vegetation here gives no cover. 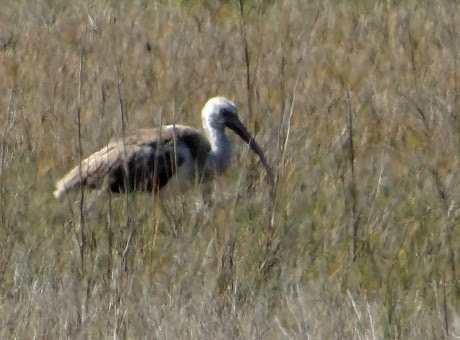 Even so, I got some fuzzy pictures. This one looks like an ibis but I looked up birds with grey/black beaks and never could identify this bird. 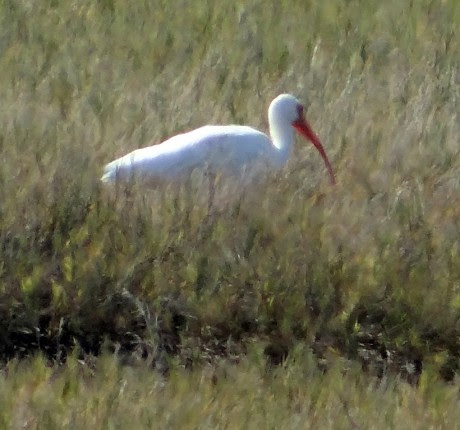 This one is definitely an ibis. 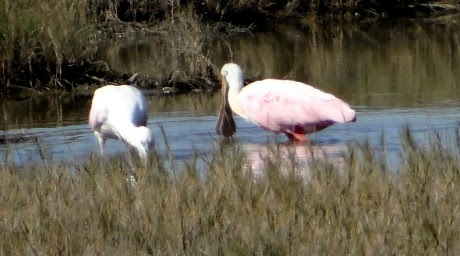 And, a couple of hungry roseate spoon bills. 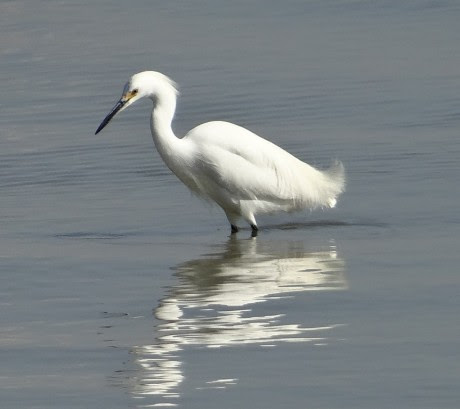 At the water frontage, a beautiful snowy egret. We learned that one female shrimp lays over a million eggs that hatch within 24 hours. No wonder they all come here to fuel up for their long flight north. 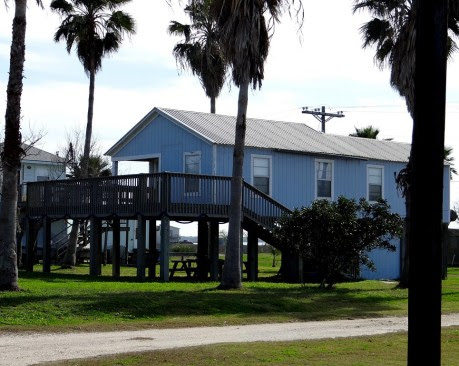 We took a pleasant drive to Indianola and cruised Magnolia Beach. There are many hurricane houses here. The town was completely wiped out by hurricanes twice. They build smarter but is it smart to build here? 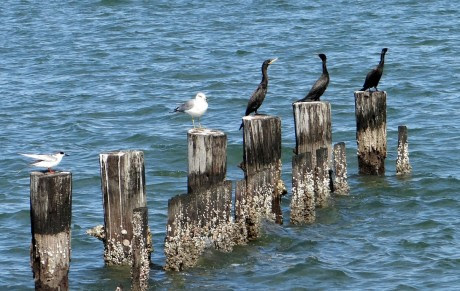 Close to shore a congregation of birds gathered on an old dock, three of them black cormorants. In the water were porpoises swimming close by. 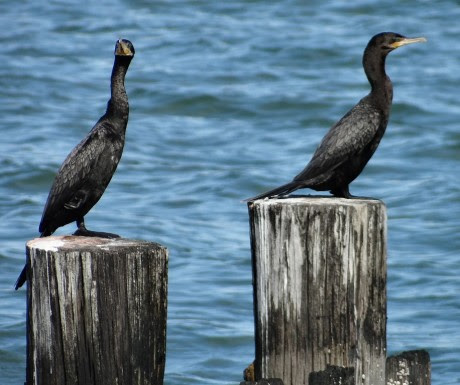 We just can’t seem to get enough of the birds around here. We drove to another bird sanctuary. 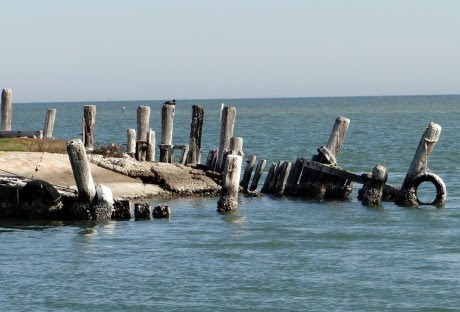 Indianola has a working fishing fleet. All the boats were out. The town ends  at the water’s edge and here was this picture postcard view nearby. 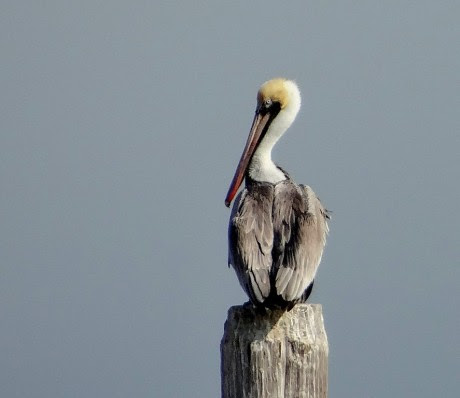 A  pelican flew in and  decided to sit right where we could take pictures of  him. 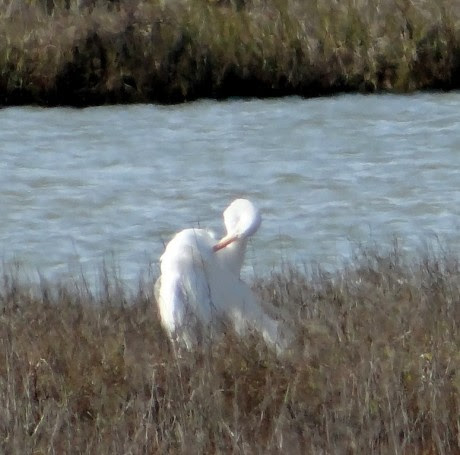 A guy at the bar told us of another bird sanctuary and off we went. We tried and tried to get a good picture of this huge bird. We thought at first it was a whooper. But, no. Another type of egret. All in all, a lovely day with good weather.
Posted by Mary Matzek at 5:30 AM