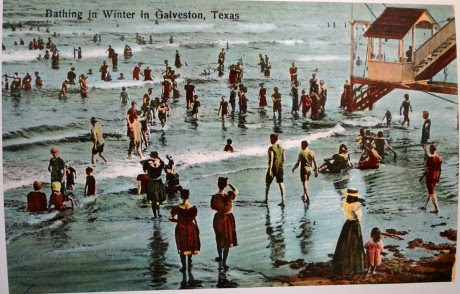 Galveston has the natural attractions of beaches, fishing, sand and sun. But, from the early 1900′s, it has been a tourist mecca and nicknamed the Coney Island of the South. At one time the biggest city in Texas and the second biggest port in the nation, second only to New York. 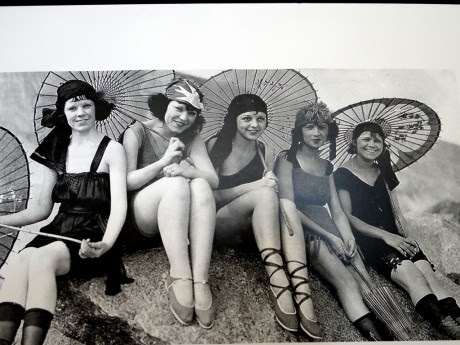 In 1877 swimsuits had to cover from the knee to the neck, but by the 1920′s a Bathing Girl Review hosted by the Galveston Beach Association was so popular it eventually led to the Miss Universe Contest. 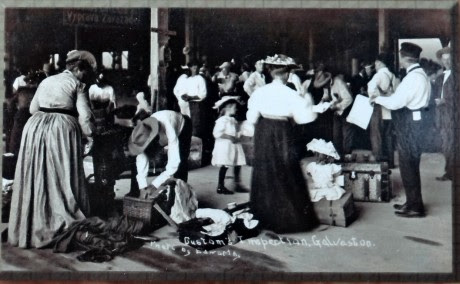 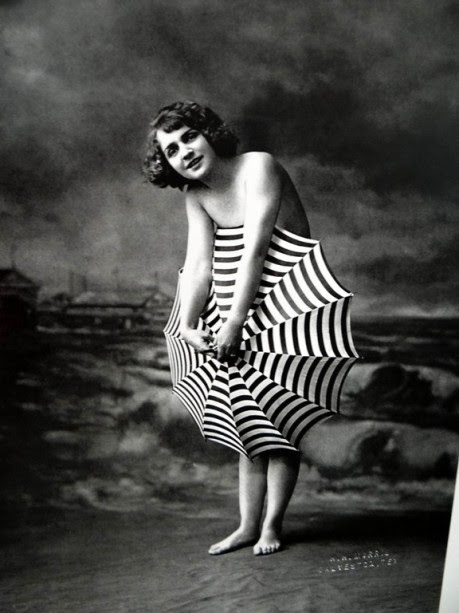 During prohibition, people from everywhere flocked to Galveston, nicknamed  a “Free State” meaning booze, women, gambling, you name it. The town was full of vice and wide open. Now everything is legal and the crime rate is way down by comparison. Must be  lesson here, when we have drug cartels at our borders. 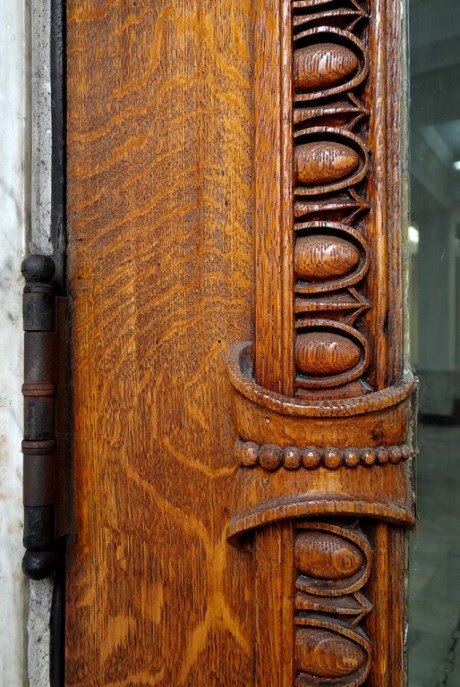 The Museum is temporarily housed on the third floor of the Library because Ike destroyed the old building. This old beautifully crafted wood is from one of the doors. You enter the library on the second floor, because the first  floor was filled with mud during the most disastrous storm in  America, a hurricane in 1900 that killed 5,000 people in 4 minutes. Some estimates put the figure at 6,000 dead or unaccounted for. It flooded the town and the first duty was to try and deal with all the human and animal bodies. There was no bridge at that time onto the mainland. All had to accomplished with a ferry for supplies and help. In fact, the visitors center here still has  short little fence because the mud was in many places simply smoothed over. It was impossible for all  of it to be removed. 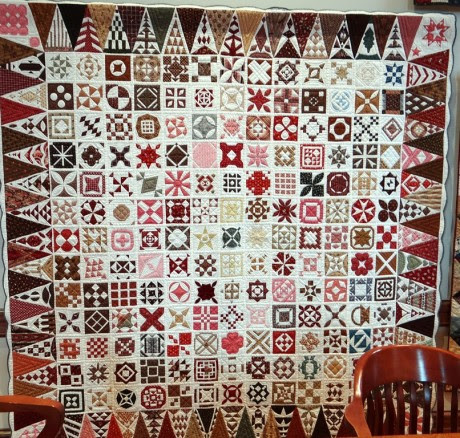 A Civil War inspired quilt exhibit at the Customs House was our next stop. I’ve quilted and have become familiar with “old” standard patterns. What a surprise here. There are 255 different block and pyramid designs identified during the Civil War period. This quilt shows them all. I don’t think it makes a beautiful quilt to have so many different blocks, but I was astounded by the imagination, the variety and the small, less than postage stamp size,  of some of the patterns. 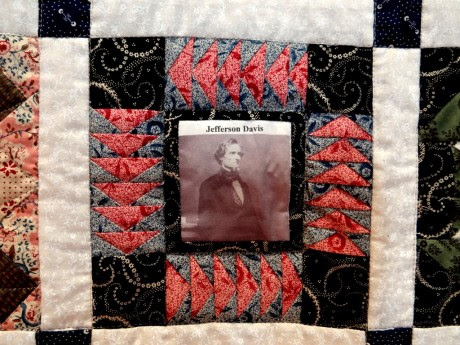 All but one of the 30 quilts in the exhibit are new. The fabrics  have been reproduced to resemble as closely as possible, old Civil War era fabrics. And, true to tradition, the quilters made tiny blocks reproducing the practice of not wasting material. The photo is only two inches square. 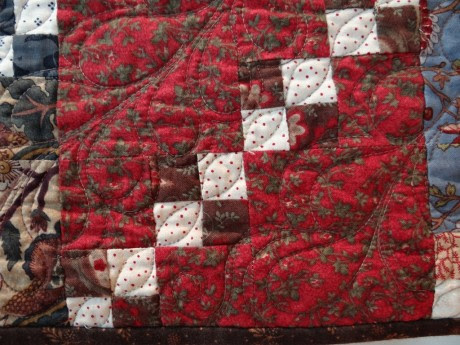 These tiny blocks are finished at just a shade over a quarter-inch. I could do a whole blog on the quilt exhibit, but we are over our bytes and have to load fewer pictures than normal. 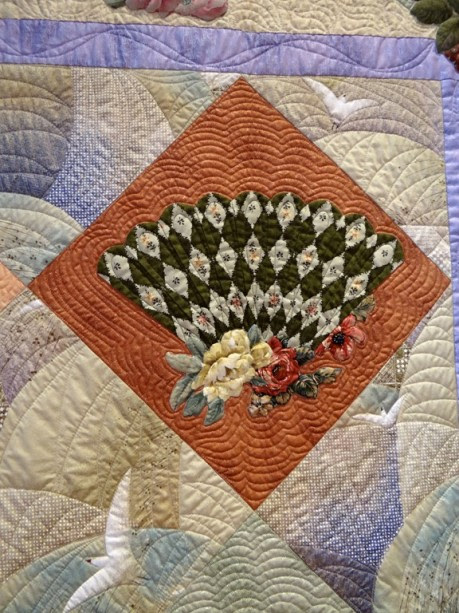 This is a Civil War fan and flowers pattern done in the “Persian” style brought to the U.S.by immigrants from France. 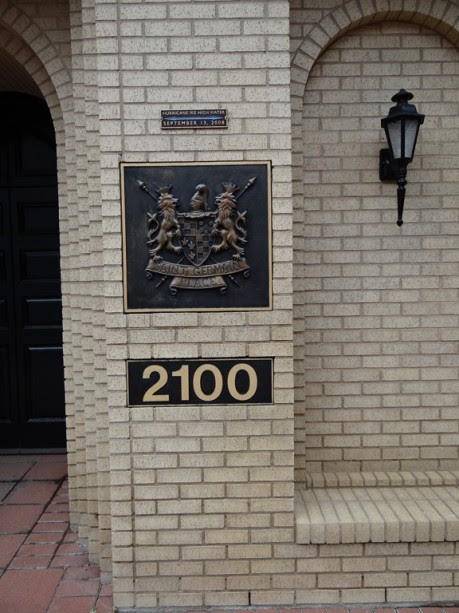 We bopped around town, looking at beautiful buildings. Popping into shops and enjoying the decorations around town in preparation for Mardi Gras. This building, if you click on it, you can read the top plaque. It shows the flood line for Hurricane Ike in 2008. 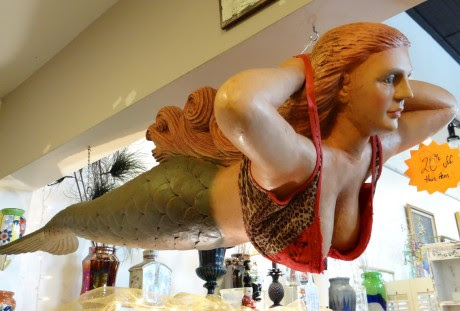 In the Naked Mermaid, I asked the owner how she came to choose that as a theme. She said she is a decorator and no one had such a store, and thus she found her niche. 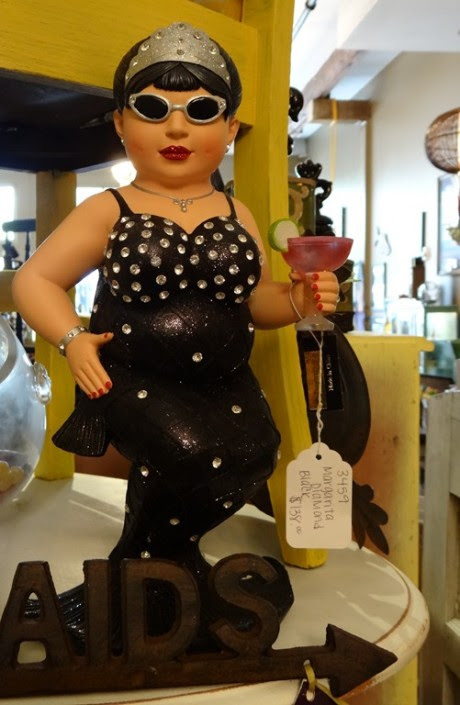 She had a line of these pudgy, humorous mermaids besides other goods than mermaids. I couldn’t believe the number of mermaid items made. She said her merchandise was way down because of Christmas. 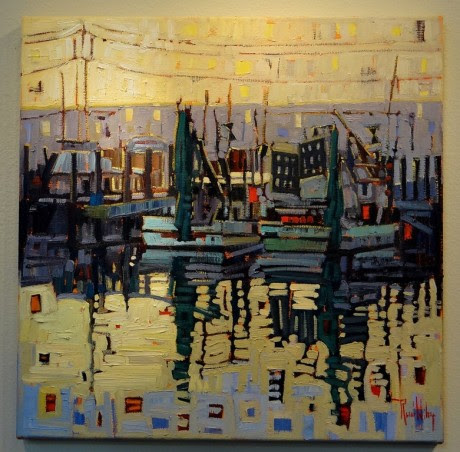 At the Wiley Gallery, I became acquainted with Rene Wiley’s work. She is a nationally known artist who paints everything Galveston. Very appealing work. 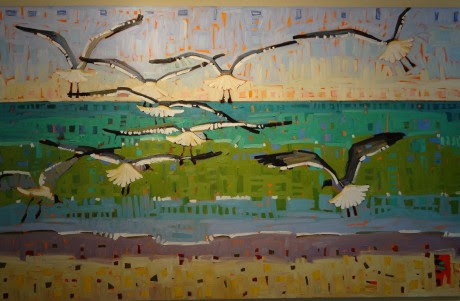 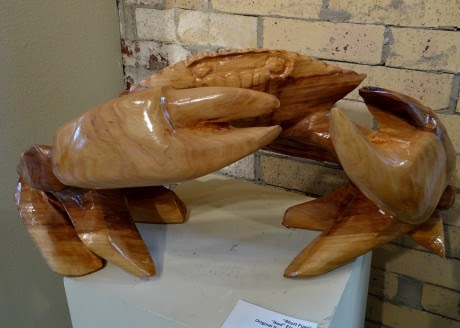 This sculpture by James Phillips is made from “Iked” wood. Meaning wood from trees destroyed by Hurricane Ike. In fact many yard trees are now carved from the stumps to make good of something devastating. 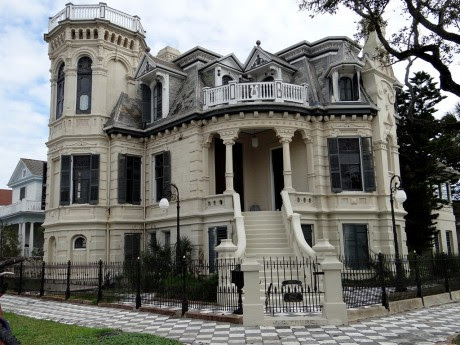 The Visitor Center gave us a map showing where all the old mansions are located. This one even has the sidewalk to match the house. It is hard to believe people still live in these huge places. I would find it uncomfortable. But, I’m glad they’ve been preserved for us to see. 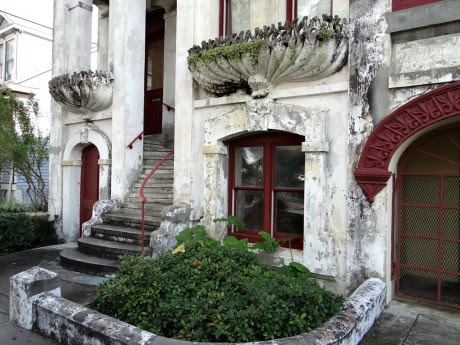 This house is for sale. It is a bit run down, but I liked it and thought it was more livable and original. 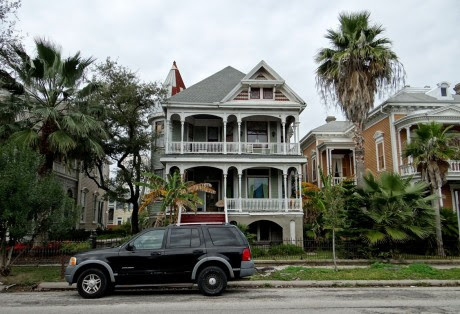 As a neighborhood, they are  beautiful and reminiscent of New Orleans.
Posted by Mary Matzek at 7:03 AM

A hungry belly has no ears