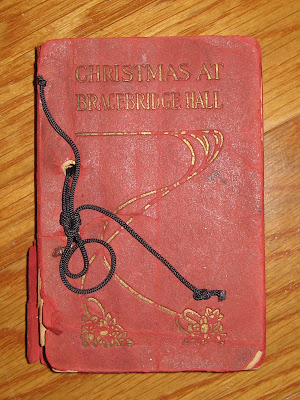 Yesterday, when I went on-line and looked at Yosemite's famous Christmas Dinner, not only did I find out it started in 1927, I learned that they hold multiple dinners throughout the season and you no longer have to go through a lottery to attend. Its a once in a lifetime thing to do. Put it on your bucket list.
My little book by Washington Irving was published by a respectable publishing house, but it had no date. When I went to  Wikiepedia and found out Washington Irving died in 1859, I realized for the first time that the Bracebridge Hall Dinner at Yosemite and the dinner by the same name described by Iriving, were not the same dinner.
http://en.wikipedia.org/wiki/Washington_Irving

Irving's little story of Christmas begins like this:
I had finished my toilet, and was loitering with Frank Bracebridge in the library, when we heard a distant thwacking sound, which he informed me was a signal for the serving up of the dinner. The Squire kept up old customs in kitchen as well as hall; and the rolling-pin, struck upon the dresser by the cook, summoned the servants to carry in the meats.
* Sir John Suckling.
The dinner was served up in the great hall, where the Squire always held his Christmas banquet. A blazing, crackling fire of logs had been heaped on to warm the spacious apartment, and the flame went sparkling and wreathing up the wide-mouthed chimney. The great picture of the crusader and his white horse had been profusely decorated with greens for the occasion; and holly and ivy had likewise been wreathed around the helmet and weapons on the opposite wall, which I understood were the arms of the same warrior. I must own, by the by, I had strong doubts about the authenticity of painting and armour as having belonged to the crusader, they certainly having the stamp of more recent days; but I was told that the painting had been so considered time out of mind; and that as to the armour, it had been found in a lumber room, and elevated to its present situation by the Squire, who at once determined it to be the armour of the family hero; and as he was absolute authority on all such subjects to his own household, the matter had passed into current acceptation. A sideboard was set out just under this chivalric trophy, on which was a display of plate that might have vied (at least in variety) with Belshazzar's parade of the vessels of the Temple: "flagons, cans, cups, beakers, goblets, basins, and ewers;" the gorgeous utensils of good companionship, that had gradually accumulated through many generations of jovial housekeepers. Before these stood the two Yule candles, beaming like two stars of the first magnitude: other lights were distributed in branches, and the whole array glittered like a firmament of silver.

However, when I went on-line and looked for this little book, I had a difficult time tracing it. Irving wrote this piece in 1822. He wrote fifty small stories of this type and they were very successful and popular in his time. Thirty of them are there to be read in full, if you like, at this web page:
http://www.online-literature.com/irving/
Irving, it is said, based his fictional Bracebridge Hall Christmas after a dinner held in the Aston House, London. So, fiction it is, fun at that, and accurate of the times. I read a few parts of other of his little stories and what follows is from Love-Symptoms:

I will now begin to sigh, read poets, look pale, go neatly, and be most apparently in love.
MARSTON.

I should not be surprised if we should have another pair of turtles at
the Hall, for Master Simon has informed me, in great confidence, that he
suspects the general of some design upon the susceptible heart of Lady
Lillycraft. I have, indeed, noticed a growing attention and courtesy in
the veteran towards her ladyship; he softens very much in her company,
sits by her at table, and entertains her with long stories about
Seringapatam, and pleasant anecdotes of the Mulligatawney Club. I have
even seen him present her with a full-blown rose from the hot-house, in
a style of the most captivating gallantry, and it was accepted with
great suavity and graciousness; for her ladyship delights in receiving
the homage and attention of the sex.

Well, so much for love and roses. I find them a delight. This too, then: