THE MOON OF THANKSGIVING.

Returning from Cedric and Virginia's at the end of Thanksgiving Day, the moon was bright and flowing light across the fields and road as we moved. Changing directions put it beautifully positioned through the trees and then with each turn it seemed livelier and brighter. It brought me in mind of the nonsense ditty by Edward Lear, The Owl And The Pussy-cat. As we rode along I began to sing it and struggle for the correct words. I'd get one stanza then another. And while I played with the words in the car, Jim said he had never heard the childhood verse. It was such fun to play with them I decided to look up the words on the internet. 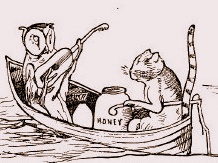 This is the original Lear drawing from his book that he wrote for a friend's children. He was the first writer to introduce nonsense as a literary form. Oh, that we are richer for his playfulness makes me smile.

I remembered the "exotic" word runcible, but didn't know until I went to Wikipedia that he invented the word for his poem.
Posted by Mary Matzek at 10:08 AM