THE MANSIONS OF NEWPORT, RI. 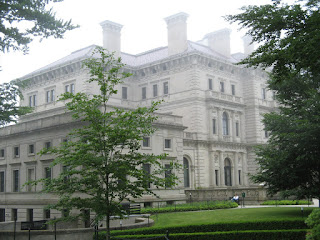 In the 1800's, Newport, Rhode Island became the playground for the wealthy. New Yorkers built beautiful mansions as second homes to spend summers in the cool weather. Commander Vanderbilt amassed a fortune of $2 million dollars. His son, William doubled it in a few short years. Money begets money and it flowed like water. The Vanderbilts controlled steamship lines and railroads.  The summer villa at Newport built by William's son, the modest Cornelius Vanderbilt, had a fifty foot high ceiling, decorated in frescoes marble carvings and gold leaf. The other rooms surrounded this massive central room to the house which had 138,000 square feet. The library has leather walls, another platinum panels.  Gold, marble, rich woods and lavish furnishings are complete, here. The opulence reminds one of European castles and royalty. In a sense, these American giants of industry were the first American Royalty. 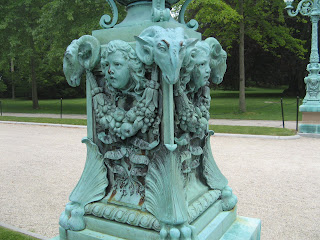 No pictures were allowed on the inside, though some replicas in the gift shop were from inside the house and made worthy photos. The Vanderbilt story is an interesting one and many good books are available there as well. The picture above is a decorated lamp post on the Breaker's driveway. 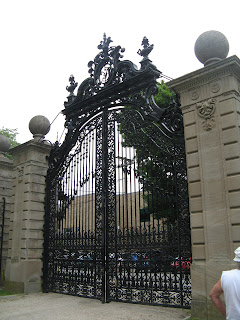 The estate gates had just been refurbished to the tune of $35,000. The Vanderbilts kept 40 gardeners busy about the grounds. Its easy to see why these places were impossible to maintain.
The new income tax law of 1913, followed by the great depression, did many of the mansions a lethal blow.  If they hadn't put some control on the barrons, America would have been just another Great Britain, with the wealthy upper class and the struggling, working, poor. Glad we can be that some of the largest mansions were saved to become open to the public as the Vanderbilt's Breakers and Cornelius' daughter's nearby mansion, Marble. The Breakers has been open to the public since 1948.
We visited on June 3rd.
You can find other mansions open to the public at this sight and listen to the audio voices of some Vanderbilt children describing what life was like in the big house at the following link:

The visitor's center in Newport provides a map for visitors to drive around the lavish neighborhoods and gawk. Which we did. You can't see much, the gates and lamp posts make an impressive photos and the atmosphere, shaded woods, acres of lawn and mansions hidden behind then make for a lovely sight, even so. 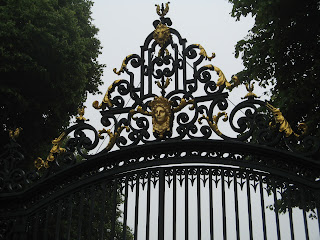 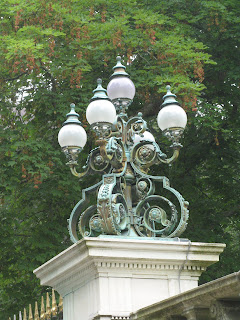 We also drove around the marinas and yacht clubs in the fog. It had a beauty of its own. 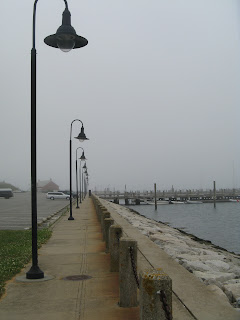 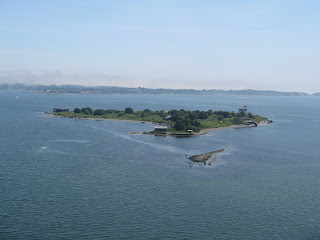 People seem to love living here.
Posted by Mary Matzek at 3:17 AM

You're right, people do love to live in Newport. I grew up there, and hope to live up there during the summers again eventually.

It's been awhile since I've toured some of the Newport mansions, but I look forward to seeing some of them again soon (especially the Breakers).

Piece of writing writing is also a excitement, if you be acquainted with afterward you can write or else it is
complex to write.

This site certainly has all of the info I needed about this subject and didn't know who to ask.

Feel free to surf to my web-site - HTTP://www.Erpinfo.org

Heya i'm for the first time here. I came across this board and I find It truly useful & it helped me out much. I hope to give something back and help others like you helped me.

My relatives always say that I am wasting my time here at net, but I
know I am getting familiarity daily by reading such nice posts.

I was very happy to find this website. I wanted to thank you
for ones time just for this wonderful read!!
I definitely really liked every part of it and i also have you
bookmarked to look at new stuff on your web site.
I though you should know, I bookmarked Blogger: Mary's Ramblin's at Delicious so my coworkers can
read it too. Could I also reveal a suggestion. Obtaining terrific video marketing can be very challenging.
I find it most worthwhile to speak to a a Bankruptcy Attorneys San Diego.
Our team of Probate Attorneys San Diego are here to assist with all your legal needs.

What i don't understood is in reality how you're no longer really a lot more smartly-appreciated
than you may be now. You're so intelligent. You understand thus considerably with regards to this topic, made me for my part imagine it from a lot of varied angles. Its like women and men aren't
fascinated except it's something to do with Woman gaga! Your own stuffs great. All the time handle it up!

Tremendous issues here. I'm very satisfied to peer your post. Thank you so much and I'm
having a look forward to contact you. Will you please drop me
a e-mail?

Here is my web page ... just click the following webpage

My partner and I stumbled over here different website and thought I may as well check
things out. I like what I see so i am just following you.
Look forward to looking over your web page for a second
time.

This site definitely has all the information and facts I wanted
about this subject and didn't know who to ask.

Fastidious answer back in return of this difficulty
with real arguments and telling the whole thing about that.


My website: my tiny Costa Mesa acupunturist pokes me

Hi would you mind letting me know which hosting company you're utilizing? I've loaded
your blog in 3 completely different browsers and I must say this blog loads a lot faster then
most. Can you suggest a good web hosting provider at a honest price?
Kudos, I appreciate it!

What's up, I wish for to subscribe for this website to get latest updates, thus where can i do it please help out.

Wow! At last I got a webpage from where I can really take useful information concerning my study and knowledge.


Here is my web page :: http://thai-austriansociety.org/GuestBook/index.php

I have been browsing online more than 2 hours today,
yet I never found any interesting article like yours.

It's pretty worth enough for me. Personally, if all web owners and bloggers made good content as you did, the internet will be much more useful than ever before.

WOW just what I was looking for. Came here by searching for
small single bed frame white

Wow, awesome blog layout! How long have you been blogging for?
you make blogging look easy. The overall look of your web
site is great, as well as the content!

I have been surfing online more than three hours as of late, but I
by no means found any interesting article like yours.
It is lovely worth sufficient for me. In my view, if all site owners and
bloggers made good content material as you did, the net can be much more helpful than ever before.

I am genuinely grateful to the holder of this site who has shared this fantastic
paragraph at at this place.

Feel free to surf to my web blog: forums.grahamcoxon.co.uk

Do you have a spam issue on this blog; I also am a blogger, and I was
wanting to know your situation; many of us have created
some nice methods and we are looking to swap strategies with other folks, why not shoot me an e-mail if interested.

If you wish for to grow your knowledge just keep visiting
this web page and be updated with the most recent news update posted here.

Quality articles or reviews is the crucial to invite the visitors to visit the web
page, that's what this site is providing.

I really love your site.. Very nice colors & theme. Did
you make this amazing site yourself? Please reply back
as I'm wanting to create my own personal website and would love to learn where you got this from or just what the theme is called. Kudos!

Hello, i think that i saw you visited my site thus i came
to “return the favor”.I'm trying to find things to enhance my web site!I suppose its ok
to use a few of your ideas!!

When it comes to those vacuums that inspire loyalty, the Bissell vacuum is one that continues to uphold its
reputation generation after generation. A Heppa filter would be nice as
well, but it wasn't an absolute must. • Pre-motor HEPA media
filter and post-motor HEPA filter.

Its like you read my mind! You seem to know so much about this, like you wrote the book
in it or something. I think that you can do with a few pics to drive the message
home a little bit, but instead of that, this is great blog.
A great read. I will certainly be back.

Whats up very cool site!! Man .. Beautiful ..
Amazing .. I'll bookmark your site and take the feeds also?
I am happy to search out so many helpful info right here in the submit, we'd like develop more techniques on this regard, thank
you for sharing. . . . . .

This paragraph is truly a fastidious one it helps new net viewers,
who are wishing in favor of blogging.

This paragraph offers clear idea in support of the new viewers of blogging, that actually how to do
blogging.

Wonderful blog! Do you have any tips and hints for aspiring writers?
I'm hoping to start my own site soon but I'm a little lost on everything.
Would you suggest starting with a free platform like Wordpress or go for a paid option? There are so many choices
out there that I'm totally confused .. Any suggestions? Thanks a lot!