TO BHARATPUR, THE TAJ MAHAL

We take an early train to Bharatpur. Distances across India are vast. From Bharatpur, another long bumpy ride by bus to our hotel. Tourists travel the distance to see Fort Agra and the Taj Mahal. Transportation is quite reasonable on these trains, but Ranvir tells us we are on an expensive train for upper middle class people. 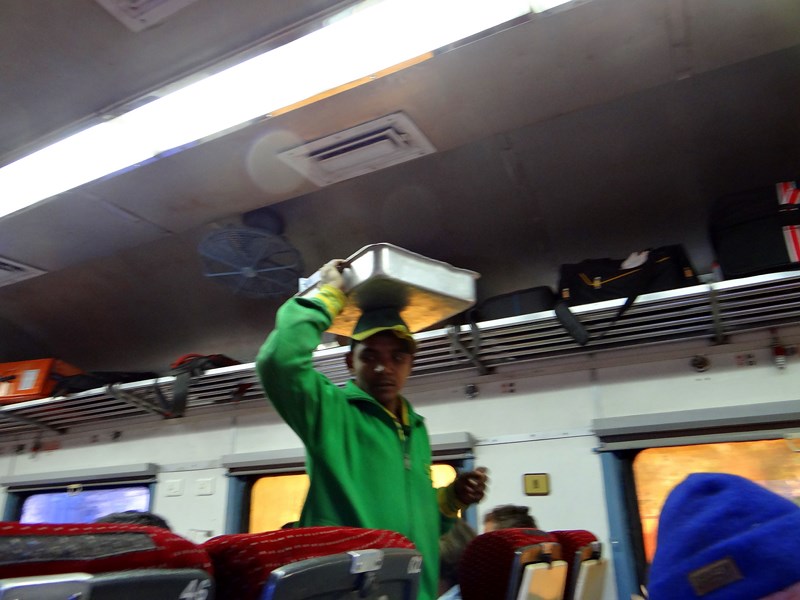 It has a toilet and food service. That is, snacks and drinks to enjoy in your seat. 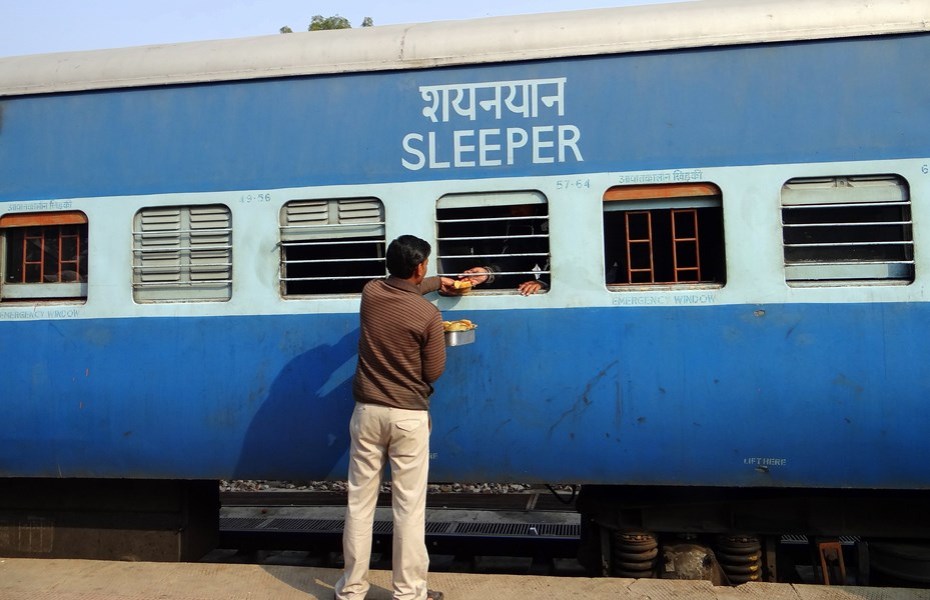 Sleeper cars cover longer distances with a dining room and other amenities. Economy cars, the general population uses, are bare bones. Mainly because patrons steal the light bulbs, cut off the padded seating, remove any piece of wood or metal they can pry loose, no curtains or shades remain, fixtures of any kind disappear. Even the floors have holes in them where boards have been removed.  While we laugh, Ranvir reminds us that poor people think it is their right to take from the government. He adds that they are beginning to crack down on such things and provide better cars for them. He describes families with a bunch of kids, sacks of food and maybe a live chicken. 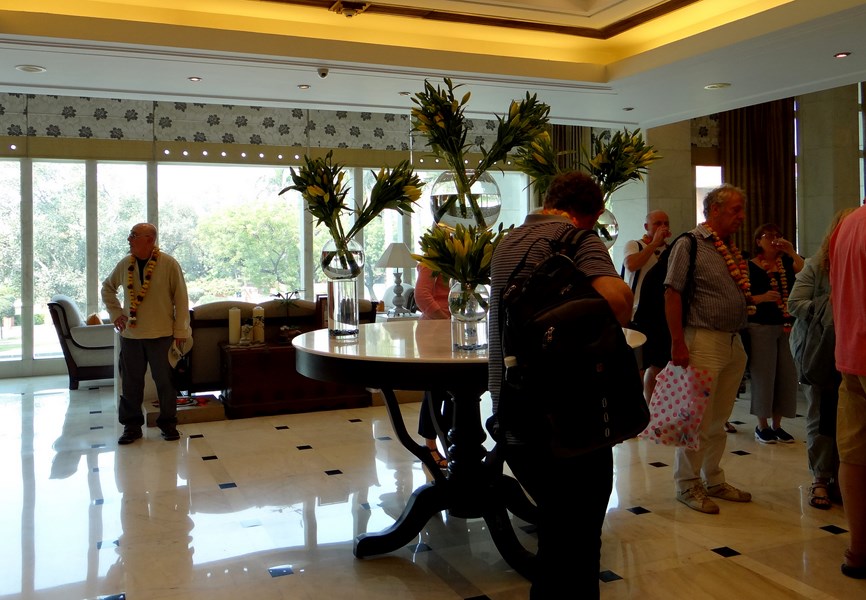 A grand hotel with over 2,000 rooms is our reward after a long day of travel. It’s nice to have luxury hotels to stay in, but this one was my least favorite.

Shiny, clean and beautiful, but you walk miles to your room. The restaurants and lobby are sandwiched between the upper and lower residential floors. I have no sense of direction and have to memorize each left or right turn in an ordinary hotel. This one is a huge challenge. 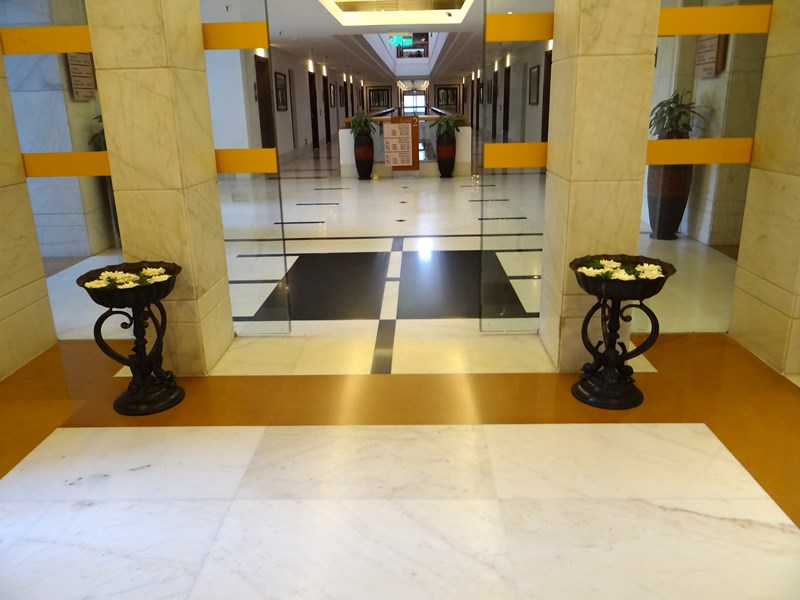 The elevators are inconveniently located and using the marble steps the intuitive way to get to your destination. As new groups come in, hotel staffers position themselves in the hallways to give directions. Apparently, I am not the only one who has problems finding my way around.

But I got my art fix. 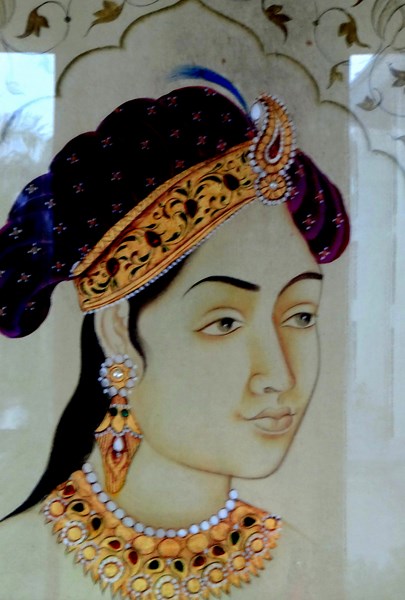 I knew I had to pass about 30 paintings and pieces of art before I turned left.

When I saw this painting it was my set of stairs. 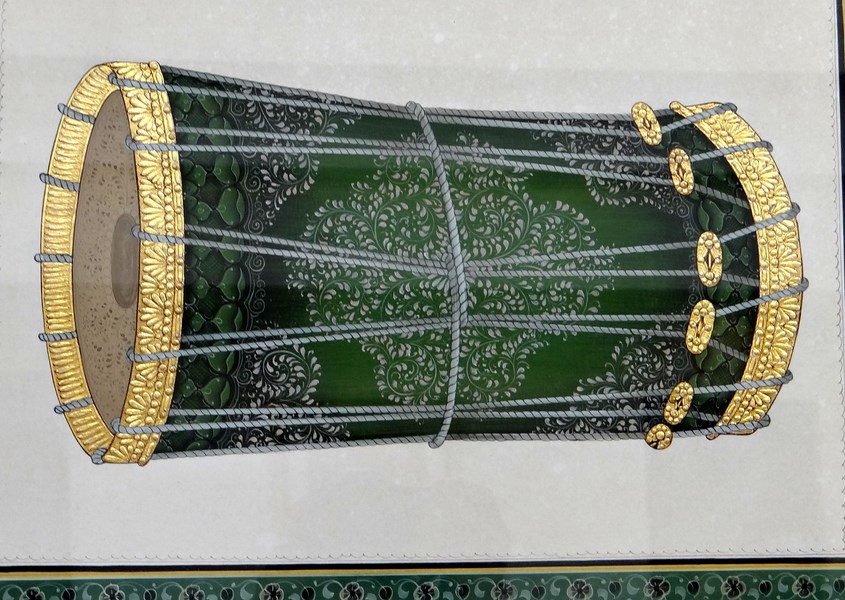 And pass the drum, before I found our room. 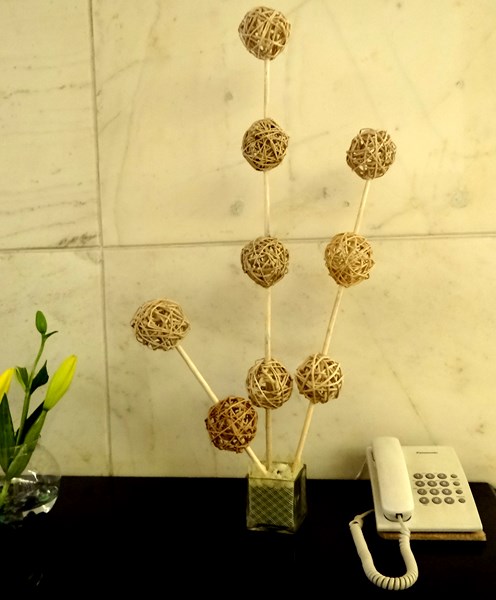 When I passed the phone, I knew where to turn downstairs to the dining room. 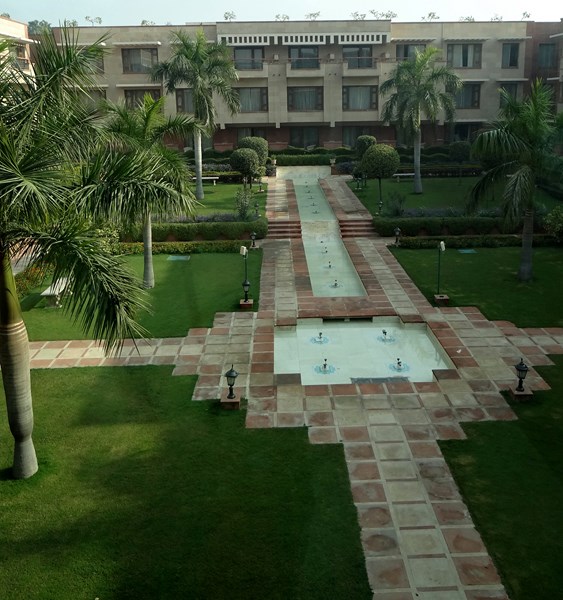 The grounds around the building are just as vast as the hotel itself. Beautiful and green and spacious. I saw only workmen, never anyone from the hotel enjoying it. If I had a week to stay, I wouldn’t need the cues.  I changed money at this hotel and they wouldn’t take small bills like tens or fives. Twenties or a fifty, only. Their limit, $5o a day. Then they gave me mostly small denomination rupees and apologized.  I was a bit discombobulated here as I complain a bit tongue in cheek. And, as always the food is excellent.
We visited Fort Agra before the Taj Mahal, but I’m posting my pictures of the Taj Mahal taken by a professional photographer. 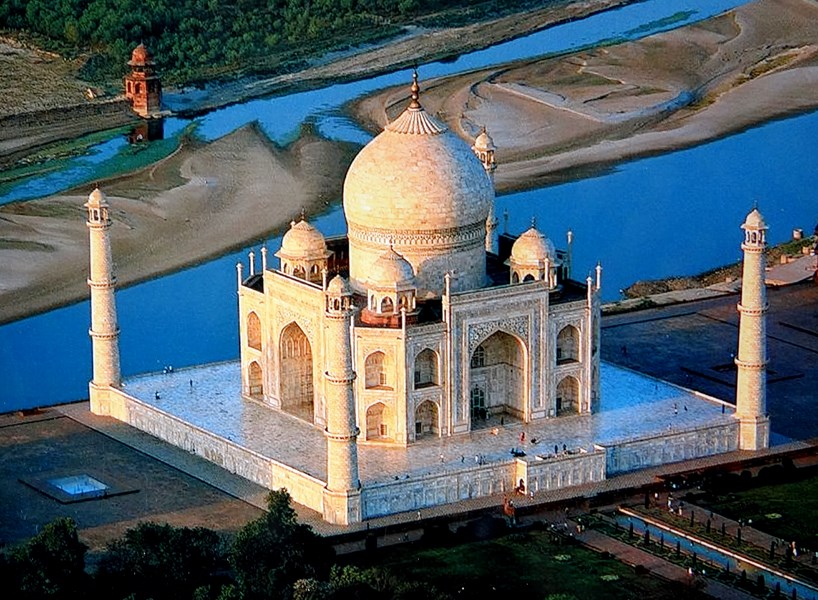 The Taj Mahal is now one of the seven wonders of the world since so many of the ancient wonders of the world are gone, such as the Hanging Gardens of Babylon, the Colossus of Rhodes, the Lighthouse of Alexandria, the Mausoleum at Halicarnassus, the Temple of Artemis and the Statue of Zeus  all destroyed. If you click on the links, it will take you to Wikipedia where you can see and learn about these magnificent pieces.  The only ancient wonder of the world to survive is the Pyramid of Giza.
Look at the picture carefully and you can see just how huge this beautiful building is. The people are like little midgets. The Taj was abandoned and deteriorated for many years. Vandals chipped marble and removed tiles from areas. Some places inside have not, and never will be restored. The outside is being fully restored.

It was mobbed when we visited. Wall to wall people, crowding to get inside with lines waiting a turn to get in. It was a crush. The towers were engineered with a slight cant toward the outside of the domed center in case they were to fall and crash, they would not damage the main building. When you stand in front of one tower, it is so perfectly aligned, you cannot see the exact same tower behind it. Twenty thousand workers toiled 22 years to build it. The verses of Holy Koran are inscribed on it.

This  group is single women on the trip. Behind, Diane and myself. Front, Sandy, Ellen, Kathy and Trish. Notice the tiny figures on the Taj veranda. You get a better idea how huge this building is. It was built by Emperor Shah Jahan as a tribute to his wife, Mumtaz Mahal in 1648 A.D. Their remains are encased in flowery decorated Centotaphs hidden from our view by a mesh screen. We could  peek into the darkened room, but could see nothing with clarity. Better to buy the post card.

Our group from left to right: Standing, Hugo, Adam, Kris, Chuck, Pam, Otto, Paul Theo, Carol, Hazel. Seated: Diane, Sandy, Ellen, Kathy, and Me. On the outside of the building, are marble panels, tiles and inlay marble of great craftsmanship. The towers, too, have intricate patterns. And high above, the  inscriptions. A wonder of the world. How did their architects learn to build so well?
Posted by Mary Matzek at 8:23 AM