GET TO KNOW LORETTA SANCHEZ.

Loretta Sanchez met with locals at the Murphys Hotel. She has served in the House of Representatives for 19 years and is aiming to win Barbara Boxer's seat in the Senate when Boxer retires. It is rare that we find someone of her caliber in our small rural county. She didn't whiz in and whiz out with a canned speech like so many of them do. She spent the whole day. She got a tour of government center, visited the Butte Fire burn area. Talked to people frustrated and discouraged over issues in rebuilding their houses at their property. Next, at the Angels Camp   Arts Emporium, she listened while fire victims shared their stories. Some are taking debris from the fire and making it into a memorial art piece as a way of dealing with devastating loss. Last evening, she spent several hours with people, listening and answering questions before, during and after her speech.

Loretta's background has all the elements of a Horatio Alger story. Her parents were Mexican immigrants who came to the United States for a better life. Like most immigrants, her father worked hard, with determination to achieve middle class comforts while her mother cared for their seven children.  In 1956, Loretta was the first child entered into Project Head Start, a pilot program to give disadvantaged children a chance to close the gap in beginning education. She credits that government program with her success today. All seven of the Sanchez children graduated college.  A first in the country, Loretta and her sister, Linda Sanchez, both serve in the House of Representatives. When her children were launched, Mrs. Sanchez got her college degree and taught in public schools for 17 years. The family is from Orange County.

I took pictures of a cross-section of the community. Middle aged marrieds. 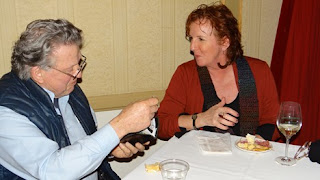 I don't know all of the people I photographed.  Beth De Lima told me she is a staunch republican as she talks to Will Moore, a Democratic Delegate.
I need to tell you about Loretta's unusual background and service.

(Photo, Merita Calloway and Jack Garamendi).  Sanchez is a senior member of the House Armed Services Committee and the House Homeland Security Committee. She fashions herself as a moderate who sees a strong role for government programs in some places, but not in others. She also says, "I'm a bean counter. I like to know, if a colleague is proposing a program, I ask, can we afford this? And, if we can't, can we do it another way?" She earned a masters in business and finance and worked as a financial adviser before becoming a Rep.

When answering questions, one person asked about the Government's threat to throw Tim Cook, Apple CEO, in jail if he doesn't open the encryption of the terrorists phone?  Her answer, is probably news by now. She said, "We have to respect individual privacy. No one can come and search your house without getting a court supported warrant. Likewise, the government cannot peek into people's phones. The answer is that Apple can open this one phone for the information without giving the government a back door to everyone's phone."

She spoke about ISIS, and the crumbling of states in other countries hosting terror and why dealing with them must include their boots on the ground. She works as a NATO representative making sure that other world nations cooperate and invest in these areas to bring them back into the economy and into a positive position of cooperation with neighbor nations. You can't just go to war continually to solve problems.

Sanchez has a reputation for working the aisle and the experience to hit the ground ready "day-one" as Barbara Boxer's replacement. She's pro-business and works well with Republicans and Democrats. Her stance is what we expect of our representatives, work it out and get the job done.
Posted by Mary Matzek at 9:01 AM