The name of this complex is Raj Ghat and is the place where Mahatma Ghandi was cremated. It is a beautiful walled garden where people come from all over India to pay their respects. The park is next to the Yamona River which runs through Dehli, though we never saw it.

The gardens are beautiful and mats surround the area for celebrations and prayer on special days, always the anniversary of his death. The grounds are well attended and people sometimes throw flowers on top of the existing bed of flowers.

An eternal flame burns at the head of his tomb where his ashes are buried.

In script are the last words he spoke. "Oh God!" Our guide told us the man who assassinated Ghandi  touched his feet out of respect before shooting him. He claimed he did it for India. There was much anger about Partition. Ghandi preached that Pakistan was free to go or free to stay. Others felt that Pakistan must commit to Islam. His position on Pakistan cost him his life.

When I was a kid, he was a folk hero to me. My dad talked politics at the table. After visiting the memorial, the bus took us to the tree lined, wide avenues the British set up when they governed India. 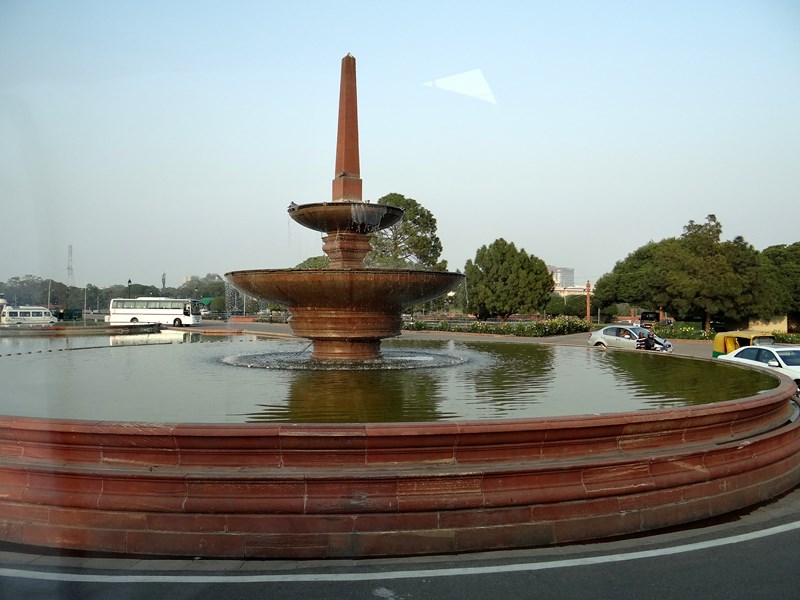 Considered one of the seven cities of Dehli, a fountain in a roundabout sits near the government complex. No one is allowed to stop so our bus drove very slowly around and around so we could take pictures.

This is the seat of power for the largest Democratic Country in the world. The Presidential palace called Rashtrapati Bhavan.

I was able to get the reflection of the building in the pond.

The ministries all have offices in this building, the Minister of Culture, Of Agriculture, Of Tourism, of Textiles, Health, and so on. Their parliamentary building. 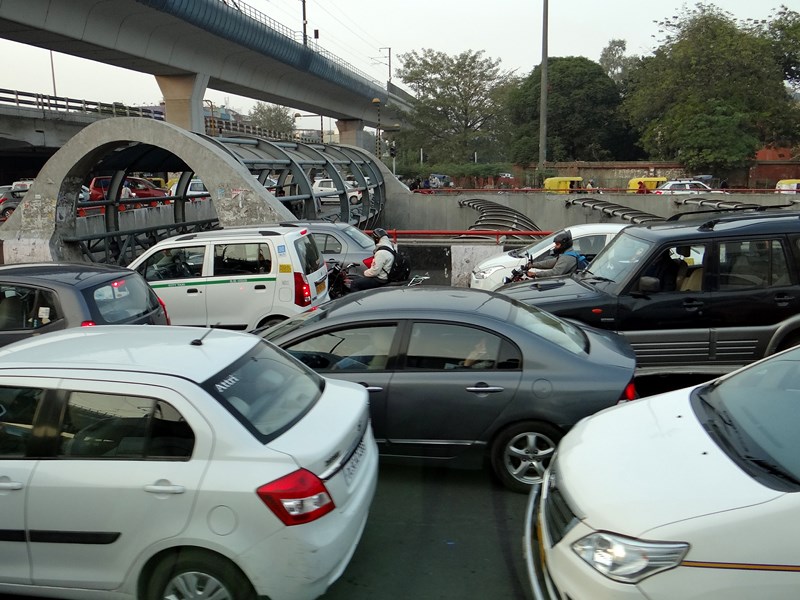 Modern paved streets contrast with the narrow lanes of Old Dehli. Next to this bridge, a tube can be used to get from one side of the freeway to the other. Very modern. (They don't use the word freeway.) You can barely see it under the walking overpass.

We pass by the India Gate, dedicated to those who died in the 19th Century war with Afghanistan and those who served with  Great Britain during WWI. It has an eternal flame and a huge park.  Other buildings not photographed, National Gallery of the Arts, The Supreme Court, The National Stadium and some very modern Bungalows where the Brits lived in the days before granting India her Independence. 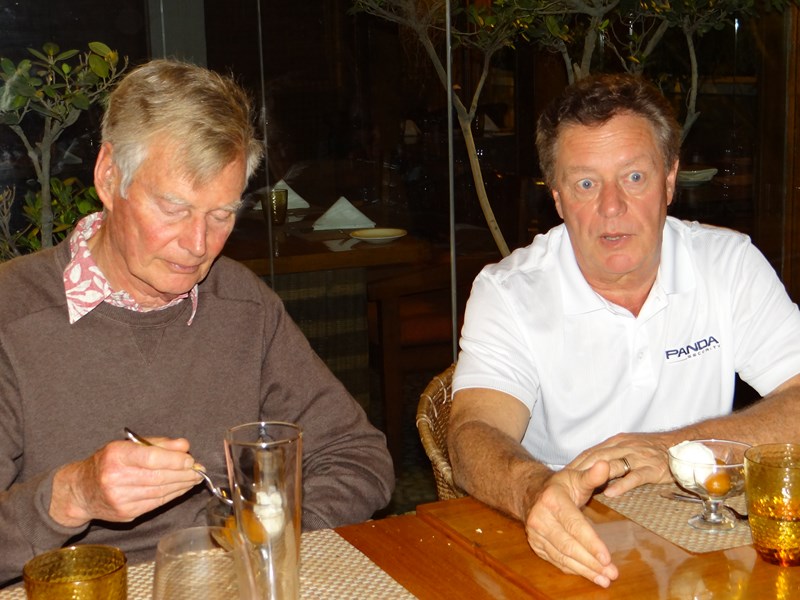 We stopped for lunch, Adam and Hugo are finishing dessert.

Ranvir and Theo. I didn't get everyone's picture. 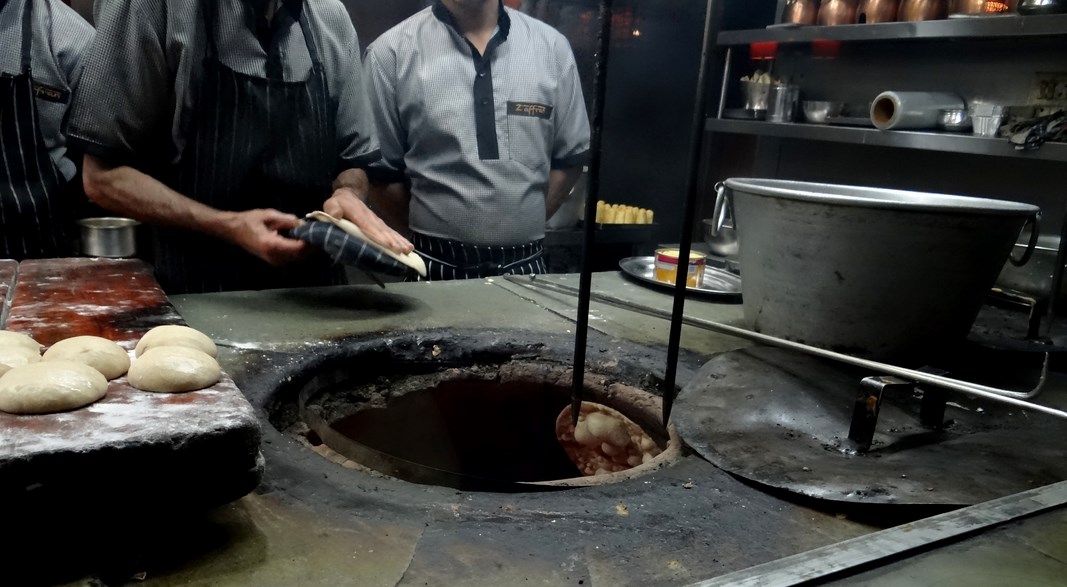 All of the restaurants are quality places to eat, but this restaurant had a glass window into the kitchen where chefs made nan in special barrel shaped ovens. 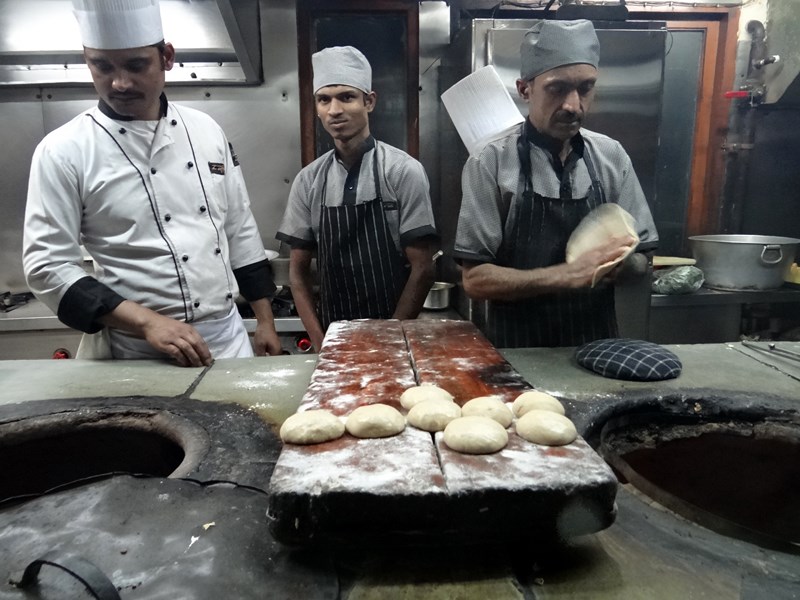 They are fast and the man on the right quickly shapes the dough into a flat bread. 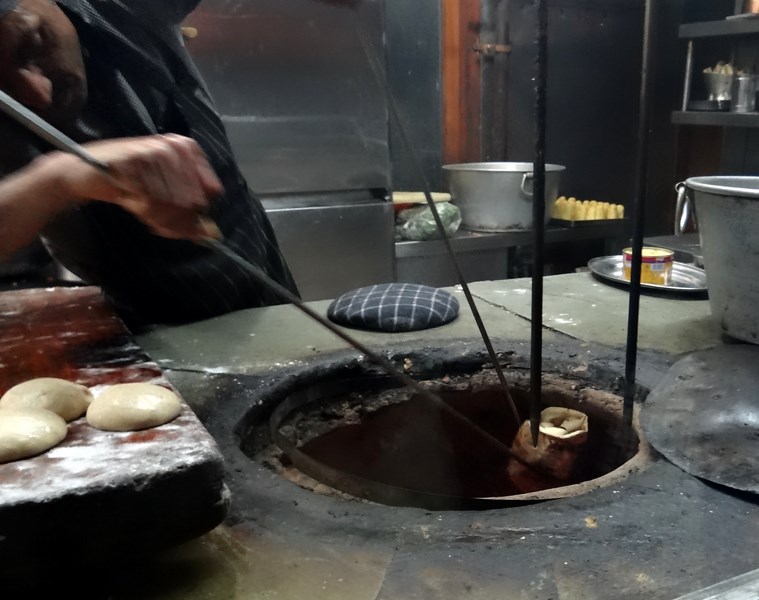 With two irons he takes  the cooked nan off the side of the oven where he plastered it moments before with no gloves or protection. He sets the bread on the blue, cloth-covered wooden "plate" and reaches into the heat and plasters it to the side of the oven.

Then he begins again. Tonight we have dinner on our own.

Manju Sharmei is a Brahman woman, part of what is known as the Warrior Class.  Women are educated and in modern India, have jobs. Her children are grown and she enjoys the extra income and the challenge of perfecting her languages and in general, being a tour guide. Not all marriages are arranged in India but her marriage was an arranged one and she arranged it. Her father was a retired minister of the government at some time and they lived far from city life; a rural area where no perspective husbands could meet their class. So, she advertised herself, from a good family, credentials (her father's position) no dowry, also something changing, the dowry. She said she was attractive and had a pleasant personality. She advertised in several big city newspapers and got six potentials. Men like to marry a little bit above their class and that was the case with her husband.  She met with at least two men at a hotel in Dehli with both families present.  When her future husband presented, he met with the family, they spoke for about 15 minutes and he presented a ring which she accepted. Then, the date for a marriage has to be chosen by astrology. Their personalities must have at least 20 matching astrological points before they can marry. She was very happy to be a wife and mother until her boys grew to manhood. Her husband does not mind that she works.  India is definitely changing. I thought it was nice that she shared such personal information with us.
Posted by Mary Matzek at 8:54 AM