Jim left my place on Monday. The weather here has been pretty cold for a weather wimp.

He waved goodbye and struck out for southern climes.  He reached Palm Desert yesterday and they've had a cold spell with some gusty wind.  You just can't predict the weather. I'm chuckling a bit at his expense.

Every year I head downtown Murphys for their open house held the first Friday in December.  This year I went early because the Mountain Melody was putting on a concert at 4:00. TILT. I had the wrong date, the Black Bart Players Theatre was locked with a sign: Concert 4:00 Saturday. I'll be attending a memorial service and won't make it. With time on my hands, I took some pictures. Somehow,  an outdoor decorated tree doesn't look right during the daytime. Now, with a little snow... My mid-west roots are showing. I miss a white Christmas.

I poked around some of the stores, admiring the tree trimmings for sale. I used to make a point of buying one new ornament each year. I have over 2000 ornaments, so I've quit that. A ridiculous problem for rat packers. Guilty.

I ran into some friends, but did I take a picture of Lynette, Ginger and Roger, Suki, Eleanor, Richard or the Gilmores?  No, I was too busy yaking. But I did take a picture of this cute baby with her daddy bursting with pride. He was just glowing.

I thought I'd have dinner as the restaurants were opening up. They were overwhelmed with long lines or reservations to get anything to eat. Finally, it got dark enough for the Christmas Parade. But, the streets were mobbed, everything is surreal from the camera lens.

Everything goes by in a blur. But, I had to include this picture because my kids attended Bret Harte High. This pick-up load of football players was rocking the truck back and forth so forcefully with their weight, it tested the shocks on the truck. I had never seen anything like it. Such fun. Both my sons played football for Bret Harte. 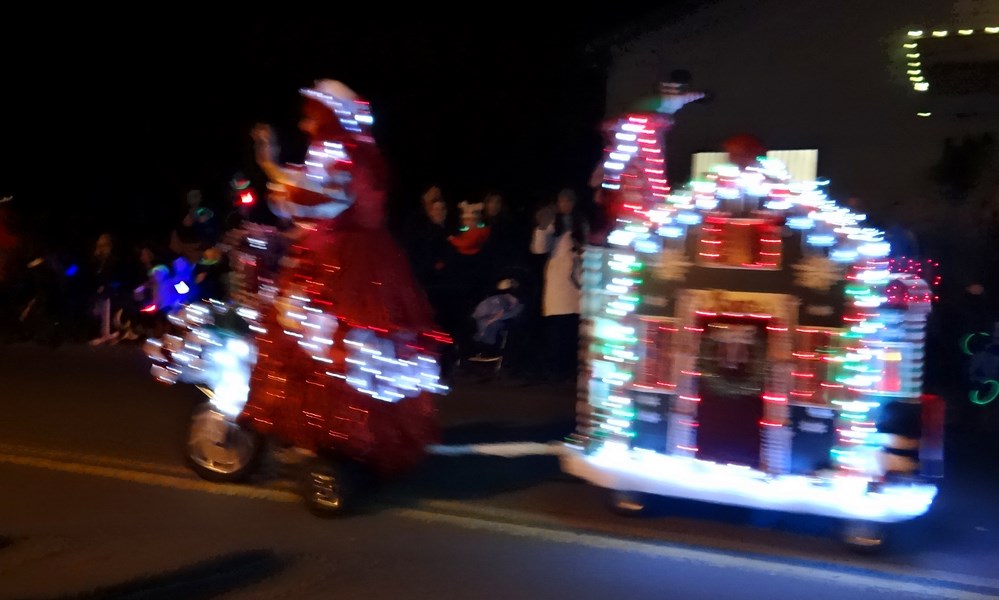 The lighted floats and entries were really nice. Even with a clear shot through the crowd, by the time your flash can focus, you still get a blur. 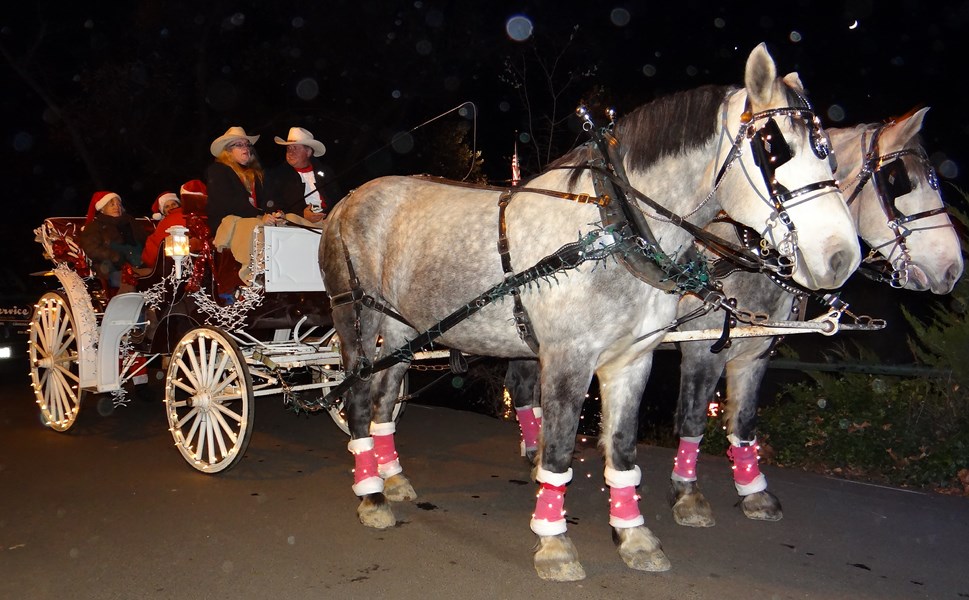 The young kids were enjoying the parade and that is what parades are all about. Enjoyment, not photography. It was cold. I left early. And on the way to the parking lot I  got a decent shot of these draft horses.

And this parade entrant getting its fancy gear removed. Aha! Now I know how to photograph a parade. At the beginning, before they get moving. Or, at the end. I returned home and ate cookies and ice cream for dinner.
Posted by Mary Matzek at 8:48 AM